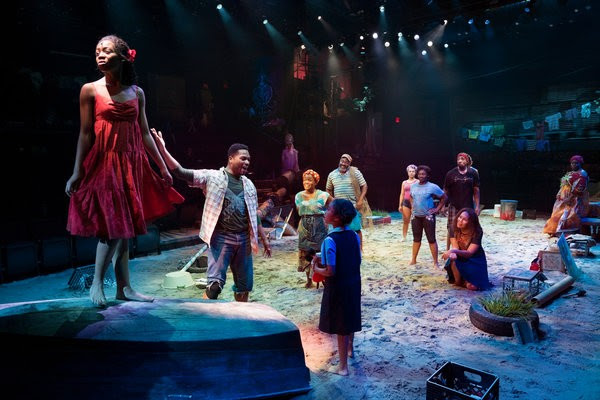 Once on this Island: Inspired Storytelling

The intimate Circle in the Square theatre has never felt so atmospheric. A lush revival of  the Lynn Ahrens’ and Stephen Flaherty’s Once on this Island fills the theatre in the round with such vibrancy and authenticity that it is difficult as an audience member not to feel pulled into the action of the tale unfolding on stage. Goats wander about the set, water pools around the ankles of the actors, and several rustic looking shanties filled with the laughter of actors surround the audience as they descend into the space. Yet, for all of this exemplary scenic and creative design, the triumph of Once on this Island is the simplicity of its narrative and the artistic passion electrifying the telling of this particular tale.

Once on this Island is, at its core, folklore. A small village in the French Antilles gathers to recite a tale to a child – teaching and inspiring her with their shared history. The tale they tell is of one small girl who survives a terrible storm produced by the gods. Under the close eye of the gods, who spared her life, and a poor adoptive family who find and rescue the girl (with some gentle nudging by the goddess of love), the girl, Ti Moune, grows into young women yearning for adventure and seeking her purpose in life. Surely, she was sparred to do something tremendous, but she grows stir-crazy as she waits for her life to begin. One night, Ti Moune rescues a young man, Daniel, from a car accident, noting that he is a member of the social ruling class (indicated by his pale skin as compared to Ti Moune’s dark complexion). Despite not being of his world, Ti Moune falls in love with Daniel and takes him back to his family, where she cares for him during his recovery. She believes that Daniel shares her feelings after they spend many nights together and Daniel takes Ti Moune to an event where she charms both the staff and guests with her joyful dancing, but the boy’s family, friends and social circle ultimately shun Ti Moune because of her dark skin and low social status. Distraught and heartsick, Ti Moune struggles with the idea that someone like Daniel could, despite his obvious feelings for her, shun her to preserve his social standing – choosing instead to go through with an arranged marriage.

Staged in the round, Once on this Island is a musical with an intimate feel. Even the dialogue invokes feelings of a family story time, with the locals (members of the ensemble deemed “storytellers”) rallying to tell one young child a shared legend about love and the empowering message that hope and progress often spring from the darkest of places. As with the recent revivals of My Fair Lady and Carousel, criticism has been leveled at Once on this Island for not keeping up with our #MeToo era, and, admittedly, some of this criticism is warranted. The play is principally about a young girl desperately seeking the love of a boy whose social class dictates that he cannot love her back, until it crushes her spirit. However, this criticism often ignores the merit of presenting this particular revival. In addition to showcasing a remarkably diverse cast, Once on this Island presents positive images of community and family, as well as featuring a narrative about racial and socio-economic disparities in the French Antilles. Its universal messages are woven into a distinctly non-white narrative, which commercial theatre is still severely lacking in the post-Hamilton world.

Director Michael Arden’s immersive staging lures the audience into the story, enveloping them in Dane Laffrey’s scenic vision of a vibrant, tropical island plagued by frequent storms – the sprawling landscape in which Ti Moune journeys. Lighting designers Jules Fisher and Peggy Eisenhauer, as well as sound designer Peter Hylenski, combine their talents to bring thunder and lighting, beautiful spring days and soft night-scapes to the Circle in the Square theatre. The entire creative team has crafted an aesthetic that feels simultaneously professional and understated – elaborate enough to befit a Broadway production yet seemingly built out of the odds and ends that a poor community of storytellers could pull together from their village.

The Once on this Island ensemble shines with an exuberance and dedication to their story that invigorates the show. Alex Newell brings the house down as Mother Earth, Asaka, with her sassy and soulful rendition of “Mama Will Provide.” Broadway superstar Lea Salonga delivers an understated but lovely performance as the the goddess of love, Erzulie, and her song “The Human Heart”, performed along with the rest of the ensemble, is an enchanting number in a otherwise energized show. However, the breakout performance in this production belongs to newcomer Hailey Kilgore as the spirited and naive Ti Moune. Kilgore’s powerful vocals are matched only by her admirable ability to invoke and evoke a wide range of stirring emotions. Whether she is bounding about the stage celebrating life or writhing upon it in agony after Ti Moune’s love is rejected, Kilgore is the heart of this production and brings a youthful ebullience to the show.

In a relatively weak Broadway season, Once on this Island proves that there remains creative spirit in the commercial theatre industry – that there are still artists dedicating to telling stories that are not based on a film or novel, that do not feature A-list movie stars, that do not feature a cookie-cutter cast and that celebrate both the diversity and shared humanity of our communities, of our country and of our world. Once on this Island may be a revival, but its themes feel no less urgent or impactful than they did when the show was originally produced in 1990. As Lynn Ahrens and Stephen Flaherty so poetically summarize, we all “are part of the human heart” and Once on this Island proves to be the heart of this Broadway season.