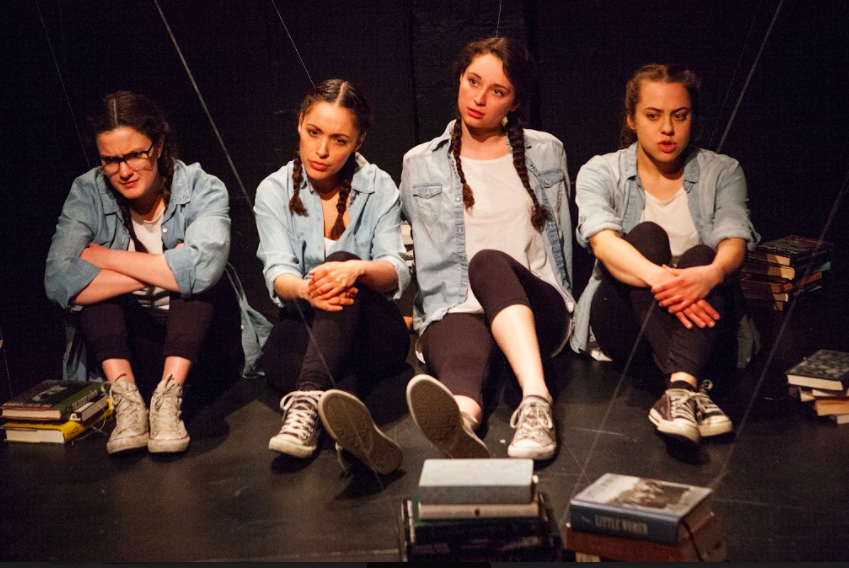 Thalia Kane’s new play offers up a dark version of four young women’s coming of age in a rural Canadian high school. While the script needs some development, the play makes a significant contribution to current political conversations around consent and assault.

Entering the space, the set is immediately impressive. Strings hanging from the ceiling are anchored in stacks of books peppered around the stage. The resulting image is a spider’s web of sorts in which the girls are caught. It frames the action (carving out rooms and walls of the school) while also making it awkward for the actors to navigate the space, but this is exactly the point. It recalls – intentionally or otherwise – feminist theorist Marilyn Frye’s famous image of the birdcage, an image she uses to explain the intersecting forces that serve to trap women in impossible situations. Some of these forces are known in feminist discourse as ‘double binds’, positions from which every choice has bad consequences. One familiar example is the slut-prude bind: if a girl has too much sex, she’s a slut, too little and she’s a prude. There’s no ‘correct’ choice, because you’re not in charge of the narrative.

Despite attempts to reclaim the word ‘slut’, we haven’t really moved past these binds. And reclaiming the word is one thing for an educated adult, and another thing entirely for vulnerable teenagers. There are almost no resources about sexuality available for young women, especially ones in religious school in small towns (but certainly not exclusively) where sexual education is almost nonexistent. Pornography is targeted at young men, and so women end up entirely dependent on and at the mercy of social influences, something that Kane emphasizes in her script. How are you supposed to figure out how to be ‘sexually empowered’ when your only cultural models of female sexuality involve objectification?

Well, one strategy is to beat them to the punch, to objectify yourself before anyone else can. So the girls compete with one another in a game which at first seems exciting, but quickly turns dark as Jenn, the instigator, gets increasingly competitive and judgemental, and the actual desires of the girls – realizing they might be a little bit gay, or maybe a lot gay, or maybe just aren’t interested in partaking in the game at all – get belittled and dismissed. The result is heartbreaking as their struggles to find love, recognition, and peace are punished by the adults who refuse acknowledge their own complicity, instead labelling the girls’ behaviour embarrassing and immoral.

Watching adults – even young adults – play teenagers is an odd experience. It’s all too easy for the acting to veer into parody, which can accidentally undermine the action, which is why the performances here are such an achievement. Kane and Shaina Silver-Baird have great chemistry as best friends Tommi and Sarah, and Tamara Almeida’s snarky invulnerability hits some great notes, contrasting starkly with Lily Sciven’s deferential meekness.

If I am dissatisfied with anything, it’s some weakness in the script. Jenn’s (Almeida) revelation at the end is a bit quick, especially given the fact that her inability to speak of her secret throughout the rest of the play hugely contributes to the central action. Jeanie Calleja’s portrayal of the school guidance counsellor is good but between the fact that Mrs. Wright is an underwhelming mother and even worse guidance counsellor, she seems the most superficial, though I’m inclined to attribute this to the writing rather than Calleja’s performance. Having said that, one excellent moment that stands out is Wright’s fight with her daughter Laura (Scriven). It’s ugly in a way that viscerally evokes similar screaming matches from my own teenage years. It also crystallizes the intense intergenerational friction so central to the themes of this play, and highlights how tempting but harmful moralizing authoritarian responses can be.

If the #MeToo movement is going to have a lasting impact, part of what needs to change is our understanding of and approach to teenage sexuality, regarding consent but also (and so often forgotten) regarding desire. The ’94 Club provides a window into exactly how important that is.