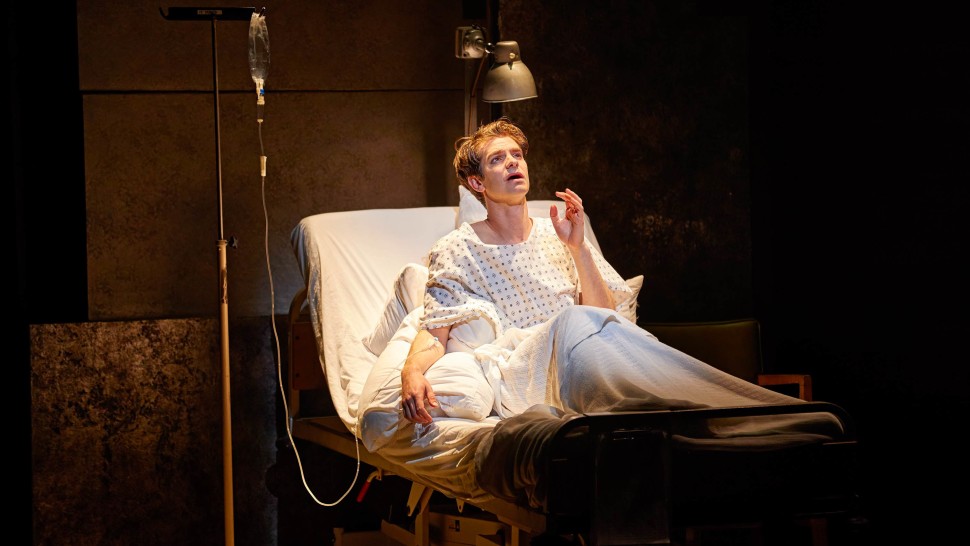 Angels in America Back on Broadway

Transferring after an exceptionally well-received run at the National Theatre in London, Tony Kushner’s epic drama exploring the intersection of AIDS, politics, religion, faith and social commentary in New York City in the 1980s, Angels in America, has not been seen on a Broadway stage since it closed in 1994.* Yet the current revival feels as vital and poignant as ever. This is heavily due to the fact that America’s current social and political culture eerily echos that of Reagans Reagan’s America, as well as the fact that Kushner’s fantastical imagery and enigmatic characters make the play both mystifyingly perplexing and oddly accessible. Director Marianne Elliott’s staging could be considered minimalist, but there is a complexity in how the stark set pieces and actors transition between scenes and a keen focus on Kushner’s sumptuous words that elevate the work.

Angels in America is a two part play, comprised of “Millennium Approaches” and  “Perestroika”. Set in 1985, Angels in America tells the story of a young man named Prior Walter who struggles with his HIV status, both in how it impacts his relationships and with his deteriorating health. His boyfriend, Louis, pontificates about politics and social mores, but he finds Prior’s illness to be an insurmountable challenge that he cannot bear to face and leaves Prior after he has been hospitalized. At the same time, a Mormon lawyer named Joseph Pitt and his mentor Roy Cohn, both gay yet neither willing to reveal their sexuality publicly, struggle with the isolation that comes with remaining closeted. For Joe, this isolation comes from his religion, which tells him that homosexuality is a sin, and his relationship with his agoraphobic wife, Harper, who loves him but suspects that he does not share the same type of love for her. For Roy, this isolation comes from alienating anyone who could be a real friend or confidant by manipulating, cajoling and even threatening those who stand in the way of his professional success. Joe eventually confesses his homosexuality to Harper and begins an affair with Louis, taking a significant, if tentative, step towards self-acceptance. Meanwhile, Roy exploits his political connections to get stockpiles of the experimental drug AZT after he is diagnosed with HIV. While each character fights his own demons, both living and dead, Prior finds himself visited by an angelic guest. However, the angel arrives not to save the broken souls below, but, rather, seeking a savior herself. The angel demands that humanity stop progressing because it is only then that the damage to heaven caused by humanity’s evolution can be repaired – a demand that Prior cannot accept.

Millennium Approaches and Perestroika are not two separate stories – they are two integrated plots. However, the parts feel very different. Millennium Approaches leaves room to speculate that Prior and Harper are merely hallucinating the otherworldly apparitions that appear to them. The narrative is more grounded in reality as the characters wrestle with the harshness of life. Perestroika, on the other hand, challenges those preconceptions and blends reality with the mythical, giving the characters an opportunity to escape their insecurities and pain and leading them to poignant realizations about their lives. The inclusion of Roy Cohn in the narrative is not lost on politically-conscious theatergoers. Donald Trump frequently refers to the late Cohn as his mentor and trusted advisor. Cohn was known during his lifetime not only for being a hard-nosed, difficult (and, later, unethical) lawyer but also as a DOJ prosecutor in the Ethel and Julius Rosenberg trial. In the present political climate, the moral bankruptcy of the Cohn character in Angels in America resonates as a foundation upon which the current administration was constructed – a warning of what deeply embedded figures with questionable convictions and delusions of grandeur can do to shape the political landscape for years to come.

One grand achievement of Kushner’s play is its universally-understood themes involving friendship, love, fear of the unknown, embrace of the unknown and the resilience necessary to endure and thrive in this thing called life. It is an anthem. An ode. Kushner weaves relationships with his words. Moments of triumph are met with moments of despair and indifference and pause. Using the word “epic” to describe his work it is not done lightly for it is a great feat he has achieved to curate such a stunning tapestry of human emotion on the stage. There is very little in the world quite like it and, as the artist seems resolved to tinker with his work for a lifetime, each iteration is infused with unexpected new life.

Ian MacNeil’s set design for Angels in America is appropriately weighty, subtle, flexible and innocuous – serving its purpose and establishing the mood of each scene without drawing away from it, which is an apt description of director Marianne Elliott’s approach to the staging of this production in general.  She embraces the dynamism of the piece but also the gravity of each insular scene. Shifts between scenes are fast-paced and everyone moves with purpose as the story progresses, but every moment feels intimate and important to the narrative. Paule Constable’s lighting design strikes a similar mood – powerful and dynamic in its simplicity. The music design by Adrian Sutton builds to dizzying crescendos at moments of great awe but maintains a minimal presence in the overall plot, and Nicky Gillibrand’s costuming properly reflects 1980s style without alienating the show from present day application – although of an era, Angels in America is not relegated there. Moreover, the puppetry design of the angels evokes feelings of awe-inspiring dominance but also, when appropriate, an almost fearful and severe weakness.

While the technical artistic team creates an enchanting atmosphere, the actors revel in the space. Broadway star Nathan Lane returns to the stage as a surly, self-important Roy Cohn. Lane knows how to command and fill a stage, which is a necessary trait for the overbearing Cohn who is less a player in the world than the king of his own world. Although a divisive figure, Lane’s performance draws out a sense of pity (dare I say even sympathy) for the vile Cohn who, despite his sense of importance and control, finds himself haunted by the past as he moves toward death with no support and a resolute denial of who he truly is. Lee Pace joins this mesmerizing National Theatre ensemble with doe-eyed authenticity as the Mormon, Joseph Pitt. Pace has a revelatory moment in Perestroika when Joe finally strips down, both literally and figuratively, to accept his personal truth – open and, for once, both self-assured and unafraid. Denise Gough brilliantly straddles a line of sanity as Harper Pitt, a Mormon housewife who struggles with her own insecurities. However, the true revelation in this production is Andrew Garfield as Prior Walter. Garfield, most famous perhaps for The Social Network and a series of ill-received Spiderman movies, transforms on the stage – shedding every ounce of his blockbuster star facade to embrace the vulnerability, strength, fear, passion, despair and playfulness that create the core of Prior. Experiencing moments ranging from ecstasy to exhaustion, Prior is a herculean role that requires marathon-like emotional stamina and Garfield never falters.

In recent years, there has been a noticeable lack of quality plays on Broadway, and Angels in America is a welcome transfer that re-invigorates the American stage. Powerful, poetic, relevant and revelatory, Angels in America may seem daunting with its long runtime (over seven hours!) but it is a journey worth taking and a must-see this Spring.

*It has never been seen in its current form – Kushner has famously tinkered with the play since its inception, which is an unusual move given that the play won a Tony Award and a Pulitzer in the early 90s.