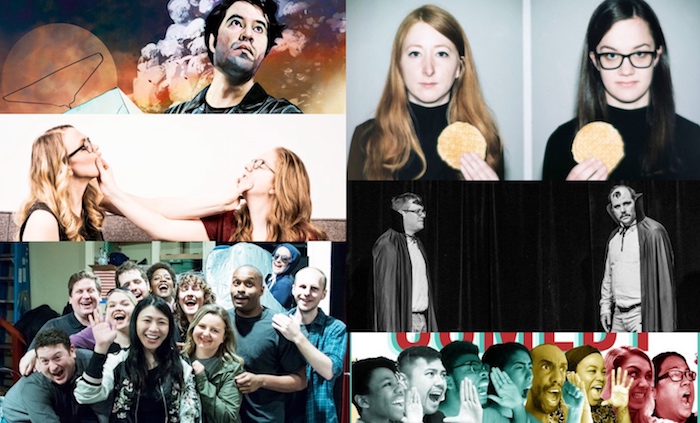 I didn’t get to see much this year at the Toronto Sketch Comedy Festival but here’s what I did catch:

Jon Blair
Solo sketch feels like it maybe shouldn’t work but Jon Blair’s whole thing is making things that shouldn’t work work so of course this show works, performed completely alone with only one small assist from Jocelyn Geddie as the voice of his mother calling on Skype in the middle of the mediocre DJ performance that hilariously opens the show. What follows is scene after scene of high-concept, thoughtfully constructed comedy that neither plays it safe nor relies too much on shock. Highlighted by a bold and gut-busting monologue from a douchey summer bro who links 9/11 with back-to-school, current Critics’ Pick Award nominee Jon Blair‘s set at SketchFest was the best thing I saw with miles to spare before second place.

Brunch & TwoSon
Two female duos really defined this SketchFest for me with killer sets from both of these pairs. I’d seen Jacqueline Twomey and Devon Henderson’s TwoSon before so knew they were a safe bet for clever, inventive comedy showcasing some of the best chemistry in the biz (Twomey and Henderson bill themselves as best friends and that vibe really defines their onstage dynamic). TwoSon’s style fits pretty easily with my own point of view and sensibilities so their set was full of hits for me but the Pimp My Ride scene probably stands out the most. Allie Entwistle and Kerri Donaldson’s Vancouver-based duo Brunch was new to me but they stood out as my favourite new discoveries of the festival. With a fun, unexpected set full of strong choices and rooted in complicated female dynamics, Brunch brilliantly lured the audience in with simple premises then raised the stakes at every turn. The three-legged race is probably the set’s defining bit but I’m still thinking about those jingle-apologies.

Laser Baby & Fusion Comedy
The troupes were much more of a mixed bag. Laser Baby from New York had a pretty solid set full of strong, medium laughs and a few fun surprises (Bloody Mary the therapist had some real bite) but from an international troupe I was expecting a bit more special than serviceable. Lucky for Laser Baby, they were paired with a particularly meh local offering in the form of Fusion Comedy, making their set seem superhumanly cohesive and sharp in comparison. Fusion Comedy is all about diversity and that level of inclusion makes room for some really promising new voices (Rush Kazi is a particular standout) but their SketchFest set was underprepared with clunky transitions and brutal pacing- just general unforgivable awkwardness of execution. I suspect there’s something there, it just needs a whole lot of polish.

The Two Draculas
There’s an extended tangent in this annoying show from a duo whose whole “thing” is that they don’t care and don’t try wherein they threaten any reviewers in the audience and explicitly tell us not to review them. Contrary to popular belief, most of us don’t like writing negative reviews. It’s not fun to slam shows, we’d so much rather spend our time and energy writing about the things that are actually good and reflect some kind of care and thoughtfulness. So, sure, Two Draculas, I will happily pass on writing any more of a review than that.