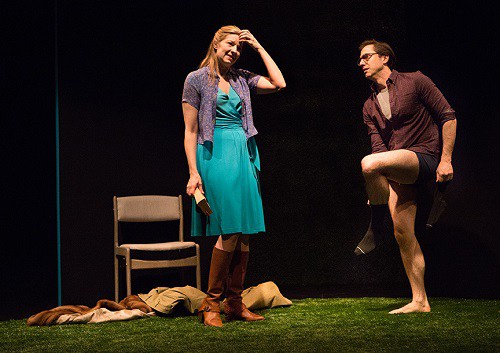 Rarely am I so entirely delighted with almost every moment of a production as I was with Hannah Moscovitch’s new play Bunny, on at the Tarragon until April 1st.

In the playwright’s note, Moscovitch explains that writing this play was a vehicle for processing her relationship to the Victorian novels she loved so much as a teenager. The heroines of Jane Austen and George Elliot are interesting and intelligent, but their journeys are inevitably tied to the men who vie for their attention, between whom they must ultimately choose to create a life for themselves at all.

Moscovitch’s play, by contrast, traces the story of Sorrel (Maev Beaty) from her awkward and isolated beginning in the home of parents who are socialist in ideology but extremely reserved emotionally. Her inability to find friends at school leaves her to herself and her novels, until she hits puberty and suddenly becomes the main focus of male attention in her small rural high school. Having been so starved for social interaction, Sorrel accepts most of their advances, often to the disgust of the other girls at the school.

Michael Gianfrancesco’s set and costume design is both effective and elegant. The stage has within it a circle lit around the edges that delineates the main action. A few set pieces and props are positioned here and there in different scenes, enough to create dimension and suggest the environment, but sparse enough that set changes happen without disrupting the flow, and our imaginations are left to fill in the gaps. Beaty’s costume consists in the same drab second-hand dress, modified with different jackets and sweaters and punctuated with running shoes, booties and knee-high boots, to signal her transition from awkward teenager to her less inhibited adulthood.

While Sorrel’s sexual development isn’t always grounded in desire (for example, it’s something she uses to bootstrap herself into social life), it’s satisfying and at times kind of cathartic to watch a woman relate to her sexuality in a way that isn’t dampened or mediated by the moralistic and repressive messages that women spend their entire lives internalizing. Beaty traverses both the stages of Sorrel’s life and the theatrical transitions between speaking to the audience and speaking within a scene with a steady, centred presence that is easy to follow and a pleasure to watch. Moscovitch’s sharp humour is impressively consistent (I don’t remember the last time I laughed so heartily and regularly throughout a play), often emerging from her attention to the authentic and nuanced awkwardness of navigating the space between what is allowed and what is desired. (And, speaking of navigating awkwardness, I would be remiss not to mention the very impressively choreographed and well-executed sex scenes.)

What’s even more interesting is that Sorrel’s journey isn’t about ‘fixing’ her sexuality. As Maggie, Rachel Cairns has a supporting but crucial role: her demand for Sorrel’s authenticity is a beautiful catalyst for Sorrel’s journey and Cairns manages a fine balance of both explosive frustration with Sorrel’s reticence and intense compassion for her promiscuity. Maggie manages to do what the men cannot, namely reflecting Sorrel back to herself, flaws and all, but with the kind of loving regard of what manages to be the closest thing to true love in this play. Unlike her Victorian heroines, Sorrel doesn’t find herself in romantic love, but in romantic friendship. My only dissatisfaction was that I wanted to see more of the friendship itself develop on stage, if only to have Sorrel’s final moments in the play resonate even more deeply. Despite this, I was nevertheless left with tears streaming down my face by the end.