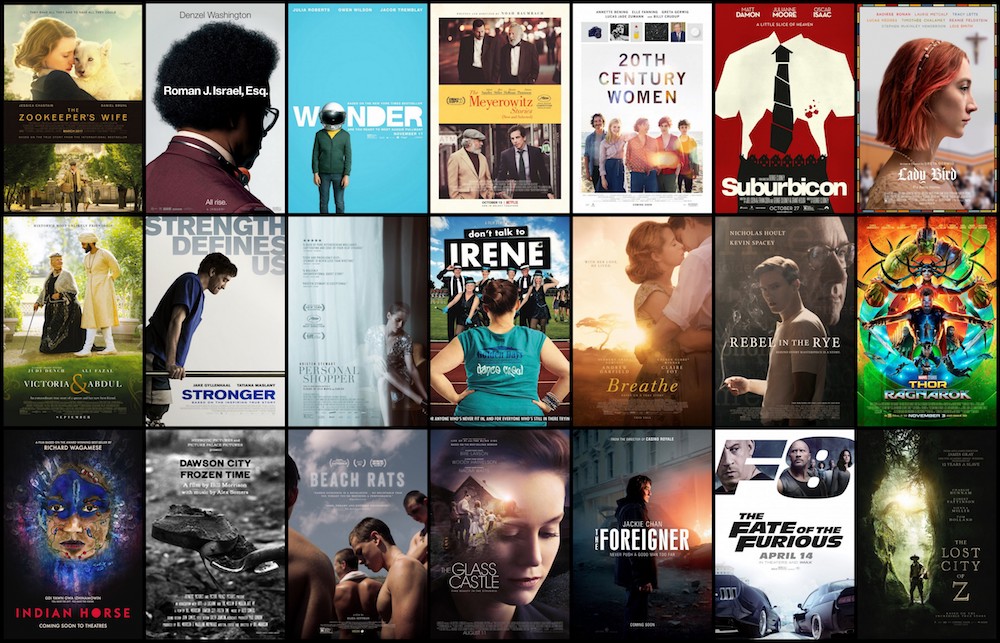 We’ve made it to the middle. Brace yourself, some of your favourite movies of the year are in this section because I just didn’t like them that much but can acknowledge that they weren’t outright terrible. Conversely, some of the more maligned and/or unknown movies in this section I really liked quite a lot. Such is the reality of the middle of the list.

43. The Zookeeper’s Wife
This WWII drama was surprisingly overlooked despite its prestigious cast and wonderful animals. I do think that Hollywood needs to lay off the second world war for awhile but it’s still confusing why this perfectly serviceable film didn’t hit.

44. Roman J Israel, Esq
Denzel is great, you’d have to be crazy to argue otherwise, but his performance in this muddled character drama is completely obscured by the physical trappings of this gigantic lead character. While the title role may well have been invented by sketch writers, the supporting cast is drawn with a much more delicate hand and Colin Farrell actually gives a terrific performance (especially considering he was featured in so little of the advertising that I literally didn’t know he was in this movie until I saw it). Farrell’s character is complicated and conflicted and not wearing a silly wig. I wish Denzel had gotten a part that good.

45. Wonder
I love a feel-good tear jerker, one of those total cleanse movies that expels your demons through tears and replaces them with the notion that humanity is essentially good. I also love Julia Roberts and think the world needs more of her ray-of-sunshine self. This movie also has Daveed Diggs as an elementary school teacher, which is just about the cutest thing in the whole world, and 12-year-old Noah Jupe gives a great performance as my favourite character Jack Will, an imperfect kid just trying to default to kindness.

46. The Meyerowitz Stories (New and Selected)
The hype around this Netflix dramedy was too high but it was still pretty good. I think everyone was a little too excited to see Dustin Hoffman actually trying again, and it wasn’t a secret that Adam Sandler had the ability to deliver an emotionally complex performance, though I will admit that he makes it hard to remember sometimes. Not the emotional gut-punch I was expecting but a swell movie nevertheless.

47. 20th Century Women
This was fine. Great cast. Not sure it knew exactly what it was trying to say but at least it was entertaining and dynamic and really took a conscious shot at nuance.

48. Suburbicon
This was cool. Weird, maybe a little thematically confused, but cool. Great parts for Julianne Moore, which is always very welcome. Noah Jupe is also great in this one because he’s a star.

49. Lady Bird
Okay, here we go. So Lady Bird is ranked #49 on my list. I know, you’re personally offended by this. But refuckinglax, it’s my list. Last year, my #1 movie of the year was Edge of Seventeen, a film that’s very similar in subject and tone to Lady Bird but somehow manages to be more fun and more emotionally complex, which is a rare combination. A lot of my frustration with Lady Bird was the constant conversation about how “refreshing” it was. I didn’t find it refreshing at all. Not only was it a remarkably similar story to one that came out Literally Last Year but narratives about moody teenage girls who don’t get along with their moms are incredibly ubiquitous. The only thing that made Lady Bird different was that it was in the awards race. And, yes, it was refreshing to see such an unapologetically female film actually taken seriously, but couldn’t we have picked a more interesting one?! I think Lady Bird substitutes snark for character development and unprompted yelling for actual conflict (perhaps an interesting psychological examination of the teenage temperament, except that everybody does it so it’s just how this film works). I wonder if I found it so empty because I’m its exact demographic. Don’t show me your sketch of an awkward entitled white girl doing musical theatre at her Catholic school while simultaneously thinking too highly of herself and worrying if she’ll ever be good enough; draw her with detail or spare me completely.

50. Victoria & Abdul
This was nice. Very pretty. That is all.

51. Stronger
There was no way for this film to avoid the inherent cheese of its “feel-good-true-story” premise but they really tried. Jake Gyllenhaal and Tatiana Maslany deliver grounded, all-in performances and the script takes a stab at the ugly sadness in between moments of public glory- the slow grind of recovery, the character flaws of an “everyday hero”. It all comes together a little too prettily but I can see the idea.

52. Personal Shopper
I felt really disconnected from this movie and that’s why it’s ranked so low despite being intellectually fairly interesting. But I’m going to level with you- about halfway through, my dog vomited and I ended up on a three-day emergency vet adventure with my very wonderful and very prone to life-threatening-illness best buddy. I came back to the paused Netflix movie with little recollection of what I’d previously seen and no real desire to backtrack. So, I watched it all but I didn’t really see it. This is why this is a subjective list! Imagine me trying to tell you that my top ten are the “best films of the year” (I hate when anyone does that); shit happens, sometimes it ruins movies, this is where Personal Shopper falls for me because of how I experienced it, let’s move on.

53. Don’t Talk to Irene
A weird Geena-Davis-as-god conceit ties this Canadian flick together. It’s an oddball charmer about a cool-ass teenage girl with the confidence and glamourless self-love necessary to just do what makes her happy. It feels like a fairly simple movie (certainly the filmmaking doesn’t have much flare and the acting doesn’t have much polish) but it’s actually remarkably sophisticated in its understanding of social dynamics. An example: we don’t actually meet the cheerleaders until the end of the film, but the thrust of the story largely comes from other characters’ ideas of who the cheerleaders are and how they treat outsiders. The social dynamics of the film are constructed by perception and assumptions and reactions to reactions rather than tired movie tropes about mean girls and high school power dynamics. Like real life, it’s almost too complicated for film. Our heroine actually looks like a teenage outsider (not like a movie star with her hair dyed funny) and her internally driven self-worth is beautifully undramatic and goddamn heroic. I want to sit “Lady Bird” down and show her Don’t Talk to Irene.

54. Breathe
The first ten or fifteen minutes of this feel-good drama about a polio survivor who pioneers wheelchair technology are the perfect showcase for Andrew Garfield’s best skillset- slightly caddish charm. After that, he’s stretching too hard, showing limited self-awareness in striving for Eddie Redmayne’s career when Hugh Grant’s is a better fit (I don’t mean this as an insult, I love him, I just want him to make rom-coms!). Claire Foy, however, is perfection.

55. Rebel in the Rye
This would-be-Oscar-movie was arguably the biggest (non-human) victim of the Kevin Spacey scandal. Whereas All the Money In the World (terrible movie) was actually saved by the commotion and great-press reshoots it had the studio backing and star power to afford, this JD Salinger biopic was just quietly cast aside, released with as little hubbub as possible so as to not draw attention to the fact that Spacey had another movie this year. Which is too bad, because it’s not bad. It certainly could be better (last year’s Genius tackled similar subject matter with much more panache) but Nicholas Hoult did great work as the famous genius recluse and more people ought to have seen it.

56. Thor: Ragnarok
This Marvel CGI-fest was way overrated. I love me some Hemsworth and am thrilled to see Hiddleston back in the role that made everyone love Hiddleston before they all decided they no longer liked Hiddleston (for the record, I will always like Hiddleston) but everything with Cate Blanchett is dull as rocks and, unfortunately, that’s basically the entire plot. That said, I really appreciate when Marvel goes full-funny (100% of my favourites are the funny ones because my ability to take comic books super seriously tapped out after Dark Knight) and I am so on board with the haircut.

57. Indian Horse
This Canadian drama about Residential Schools has some of the most haunting scenes I saw on screen all year. But it also has an overarching story about the redemptive power of hockey and I struggled with the extreme tonal whiplash of it all.

58. Dawson City: Frozen Time
The construction of this documentary about film history and a little town in the Yukon is brilliant. Director Bill Morrison uses real footage from the silent films recovered from an excavated swimming pool to visually reconstruct the story of the town where they were found and how they came to be there. The film stylistically looks like a silent movie, which is a really cool idea, but eventually the plucky piano score and endless surtitles get tiresome and I found myself longing for a narrator.

59. Beach Rats
Harris Dickinson is really good in the quiet leading role of this atmospheric indie about a tough kid questioning his sexuality and navigating the pressures of his toxically, performatively masculine friends. It’s only so low on this list because it got unfairly compared to and lost in the shadow of Moonlight. I should revisit, I feel like there’s a lot there that I didn’t see the first time.

60. The Glass Castle
I built this one up in my head too much. I’ve loved Brie Larson for a decade and am, like everyone, fully on board the Woody Harrelson train, so I kind of just assumed this movie would blow my mind. When it didn’t, I forgot about it far more quickly than a movie this intense should let me forget about it.

61. The Foreigner
This was a very difficult movie to pin down. It was a little more fun than its content dictated it should have been and it plays perhaps a little too fast-and-loose with Irish politics but Jackie Chan is kind of fantastic in it and I always love when an actor proves they’re capable of more than I thought they were. Also, my GoldenEye-raised heart will love Pierce Brosnan forever.

62. The Fate of the Furious
Charlize Theron was a cool villain and I do love some of the supporting players in this franchise like Ludacris and Tyrese and Luke Evans but it’s ridiculous that Vin Diesel and Dwayne Johnson didn’t film a single scene together and I’m not sure I can deal with a post-Paul Walker Furious franchise, it’s just too sad.

63. The Lost City of Z
I will watch literally anything with Tom Holland, I just adore him, and he’s pretty good in this period drama/adventure epic that critics loved and maybe I should watch again because I just kinda thought it was boring and maybe I was tired. Robert Pattinson was also great and I love love love that he took the more interesting supporting role instead of insisting on being the lead (so many “leading men” make that mistake and that’s how we end up with Mark Whalbergs when we deserve Ethan Hawkes). Charlie Hunnam is a mannequin, why is he a thing?