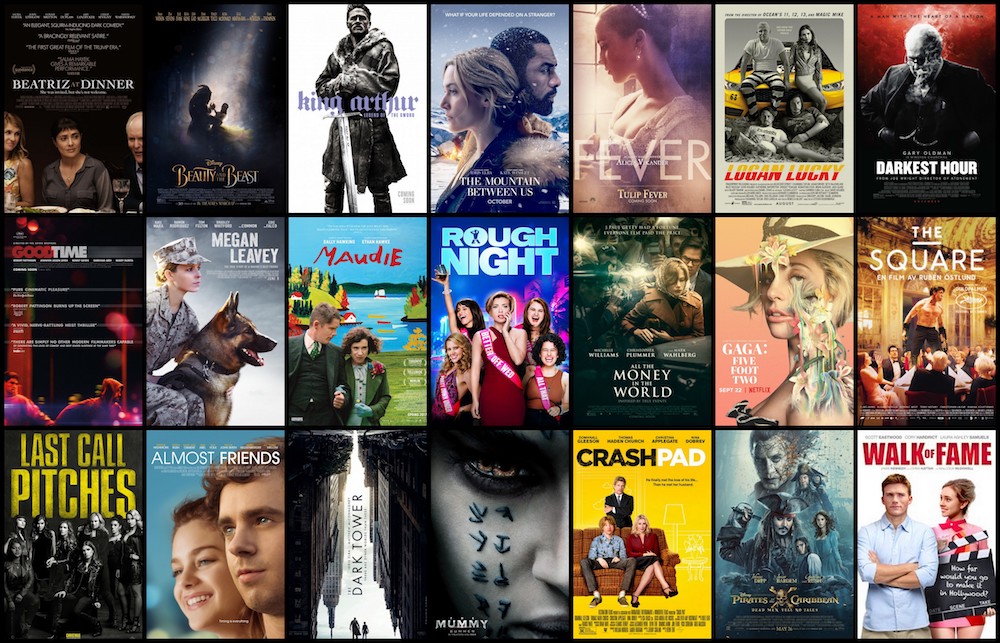 What’s cool about 2017 is that #94 on this list is the first one I disliked. THAT MEANS I LIKED 93 MOVIES THIS YEAR (and, to be honest, The Square is probably ranked a bit low so it’s really 94, I was just too tired when I saw that one). I don’t remember a year of movies this good in my entire lifetime so, yeah, this is the bottom of the list and it’s gonna get hella dismissive and snarky beyond all necessity, but try to remember that I liked literally everything else so let me be mean to Pirates of the Caribbean while I have my chance before I go into “it was so wonderful! I wouldn’t change a thing!” mode higher up the list.

85. Beatriz at Dinner
The insightful awkwardness of this biting class critique will always give it the distinction of being the first film that felt truly of the Trump era (though why anything would want that distinction is beyond me). It’s well-made and excellently cast, just a bit too heavy-handed for my taste.

86. Beauty & the Beast
The 1991 cartoon version lives right next to my heart so the experience of this remake was a tense mixture of fond nostalgia and protective outrage for me. I actually didn’t think the voices were that bad (Watson was pretty heavily autotuned but I liked everyone else, especially Luke Evans, and in a post-La La world you’ve got to pick  your battles) but I hated the lyric changes and the new songs, the script over-explained everything from classic jokes (“I’m illiterate and have never had to spell Gaston”) to key themes (“I’m not a beast”) and the story expansion defensively overreached to combat criticism (Belle’s mom’s backstory? Really? Please just relax). Some parts made me deeply happy, but not enough.

87. King Arthur: Legend of the Sword
I was kind of shocked by how much I enjoyed this movie. It’s CGI-dependent trash, for sure, but it’s a great role for Jude Law and the script is stylized in a fun quippy sitcom/play way that I ate up with a spoon, especially in the quickfire first act. Unfortunately, dialogue like that and a character this famous needs a real movie star- not necessarily someone super famous, but someone with that indescribable sparkly early-Cruise quality that screams “star”- and Charlie Hunnam just isn’t that. He does seem like a dynamo, however, next to the dull model playing the idiotic “Mage” character who reads all her lines like she learned them phonetically.

89. Tulip Fever
Speaking of people getting in their own way, the third act of this period romance about the Dutch tulip trade is a lamentable mess full of Romeo & Juliet-style “just wait a beat before you do ridiculous things!” frustrations. But it’s a very pretty movie that I mostly really enjoyed (yes, I enjoyed #89; what a year!). Solid production design, a decent script, good pacing and the sort of casting that’s really weird (Zach Galifianakis? Matthew Morrison?) put maybe kind of brilliant. There are some really lovely scenes in this film and it only has its characters and their nonsense plans to blame for its ultimate silliness.

90. Logan Lucky
I don’t know what went wrong here. It’s a decent enough film full of fun moments starring some straight-up contemporary legends but it just didn’t hit me. It didn’t help that the emotional climax is tied to the same song as a far more satisfying emotional climax in a much-more-fun film this year.

91. Darkest Hour
What a truly dull movie, especially when you factor in how inherently interesting Churchill stories are. I love Lily James and she’s a gulp of fresh air, as she always seems to be, but everything here is just the most dreary version of itself from the pacing to the aesthetic to the makeup-as-performance deception that makes me so angry on awards nights.

92. Good Time
This, on the other hand, is a really interesting movie. Weird and hard to follow and one of those awesome post-Twilight “fuck it!” choices made by the great underrated honest-to-god-fascinating person that is Robert Pattinson (he was so bored for so long it’s like his only goal from here is to never be bored again). Co-director Benny Safdie also gives one of the great unmissable performances of the year. All that said, it’s just not my thing. It’s too tough, too dirty, too altogether unpleasant. It’s good, it’s only this far down the list because I just kinda didn’t like it.

93. Megan Leavey
Whereas this is not a good movie but I just kinda liked it. Bradley Whitford gets me every time, Edie Falco is great, and I am so here for Tom Felton’s post-Potter quest to make an audience trust him (Draco’s my favourite so I’m always on board with Felton, but he just has to understand that most of my generation will always assume he’s the villain, there’s nothing he can do about it). This script is a cheesy mess and Kate Mara can’t find an emotion to save her life but dogs are perfect, we don’t deserve dogs, give me all the dog movies please!

94. Maudie
Ethan Hawke and Sally Hawkins are absolute gems without whom I cannot fathom the contemporary film landscape. And they’re predictably good in these very flashy roles. But the script is disjointed and lacks a critical eye, presenting incredibly flawed characters without seeming to have any interest in those flaws and draping an abusive marriage in a brutally unhelpful veil of “complexity” so we can pretend that what we’re seeing is a beautiful coming together rather than an all-too-common tragedy.

96. All the Money in the World
Hooo boy this sucked. Like really sucked. Chronic over-actor Michelle Williams is over-acting more than she’s ever over-acted (is she doing a Katharine Hepburn accent?!) and chronic terrible-actor Mark Wahlberg earnestly appears to be doing an impression of Andy Samberg’s impression of Mark Wahlberg (I expected him to pull out a “say hi to your motha for me” at six separate points). The best thing to happen to this movie is the Kevin Spacey thing, which is as bleak of a silver lining as I can possibly imagine but is too big a thing not to mention. The sheer fact that Ridley Scott pulled that swap-out off is insane and the fact that the movie looks as seamless as it does is incredible, and Christopher Plummer is damn good, which helps (not in an award-worthy sense but in a “it’s Christopher Plummer!” sense and you just know Spacey played it downright silly with that old age makeup and, I’m guessing, some sort of accent). Romain Duris is also very good as the only interesting character. It’s kind of interesting to say you saw it, but it’s hella bad and no amazing backstory can change that fact.

97. Gaga: Five Foot Two
You should not be allowed to be both the producer and the subject of a documentary. My problem with Gaga has always been that she takes herself way too seriously and finds herself way more interesting than I find her; this so does not help that. Her voice is killer and her music is fun/nice/whatever but this “im an ARTIST” shit is so tiresome. Maybe if this film had had some distance from its subject, it could have actually told us something beyond “Mark Ronson is an okay guy”.

98. The Square
I recognize that this film is a searing portrait of the fine art community and it certainly has its moments of brilliance- that scene at the fundraiser is nothing less than a masterpiece- but it’s just not my style. I wish I was someone who was moved by art films but I’m just not. My brain can be super satisfied and, if my heart isn’t in it, I just get bored.

99. Pitch Perfect 3
The “final” (we’ll see) entry into the ever-flawed but consistently sweet Pitches franchise is the biggest, wackiest, least-sense-making adventure yet. The first one wasn’t very good but I liked it. The second one was just pretty bad. This one really shouldn’t exist.

100. Almost Friends
The female lead looks perpetually bored and Freddie Highmore seems like he might murder her (#FreddieHighmoreProblems). So, yeah, this coming-of-age rom-com doesn’t work.

102. The Mummy
Part Raiders of the Lost Arc, with a little Jekyll & Hyde thrown in, a shot or two stolen from Lawrence of Arabia and a weird Phantom of the Opera ending, The Mummy is a grab-bag mess with mythology that’s simultaneously confusing and simplistic and too many problems with easy solutions that apparently never occurred to anyone during the half-assed development process (for example, if they’d cast the love interest with an actress of colour, the film’s weird racist undertones might disappear like the soul of the only principal minority character when she’s sacrificed to save the blonde). Tom Cruise is way too old for the role but this script does give him a bit of the smart-ass talky material that defined all his best performances in the 80s, so at least there’s that.

103. Crash Pad
This movie stars Thomas Haden Church (legend), Christina Applegate (gem) and Domhnall Gleeson (king of my heart) yet somehow all the characters are so broad and unappealing that the only person I halfway liked was Nina Dobrev. Yeesh.

104. The Pirates of the Caribbean: Dead Men Tell No Tales
WHY?????!!!!??!!! Let’s be done with Depp and done with this franchise and just let the perfect first film hold onto what little of its legacy it has left.

105. Walk of Fame
I don’t even remember what this was about anymore, I just remember being confused and angry.