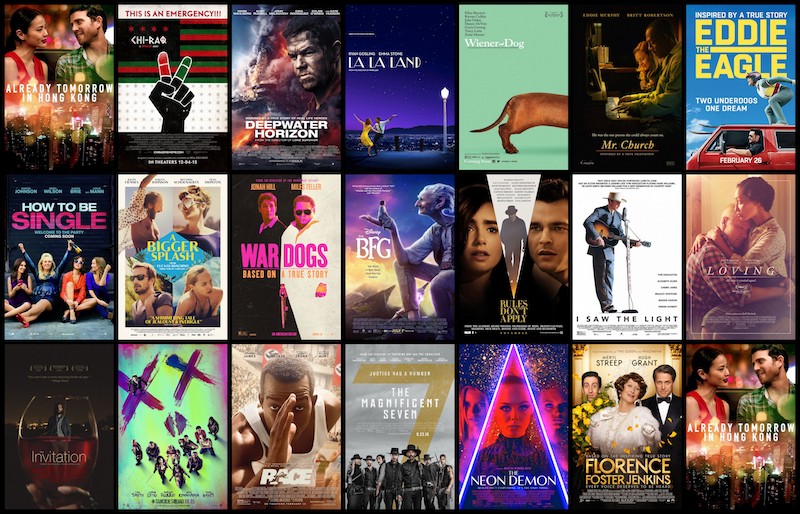 This is the “yeah, that’s right, La La Land isn’t that far above Suicide Squad; deal with it” portion of the list. I like what I like, people. There are a few movies in this section that really smart people really loved (The Invitation, Loving, A Bigger Splash, did people like Neon Demon?) but I just didn’t really connect with.

81. Already Tomorrow in Hong Kong
A simple, sweet Before Sunrise-y love story starring one of my favourite not-really-a-movie-star heartthrobs Bryan Greenberg and his real-life wife Jamie Chung. It’s nice to see that trope taken out of its usual Europe or New York home to explore some honest to god cultural differences. Definitely not a bad movie, but not all that memorable of one either.

82. Chi-Raq
This Lysistrata-in-modern-day-Chicago concept is brilliant and the cast is really great (Nick Cannon’s a real surprise, Teyonah Parris is incredible, Angela Bassett continues to be perfect) but it all gets pretty unwieldy by the end. Wouldn’t it have been great if this was the breakout hit of the year, though?

83. Deepwater Horizon
The practical effects in this oldschool disaster thriller are mind-blowing and this is exactly the sort of effortless leading man performance that made Mark Wahlberg a movie star. Gina Rodriguez, Kurt Russell, Kate Hudson, Dylan O’Brien and John Malkovich all deliver in an ensemble cast that makes you go “wait, who’s in that movie?!”. But some of the theatrics in act three are too groan-worthy to forgive.

84. La La Land
Guys, La La Land sucks. It just sucks. I know that’s hard to hear because you found it so charming and so many people disliked it for the wrong reasons and Whiplash was so great and Jordan Horowitz is who we should all strive to be. But it sucks. The singing sucks, the dancing sucks, the music sucks, the lyrics suck (sorry, Pasek & Paul; I usually love you), the story REALLY sucks, it sucks that Emma Stone puts on a play without any understanding of what it takes to put on a play then complains that no one showed up when actually a fair number of people showed up considering she has no experience, no connections, no ad budget and LA’s not a theatre town. That jazzsplaining scene sucks so hard. There are like 3 good jokes. And while there are some really good shots, literally 100% of them are in the trailer. La La Land sucks and don’t you dare tell me that my opinion is just backlash; I wanted so badly to like it.

85. Wiener-Dog
This super weird vignette film is kinda cute and totally harmless until it’s totally crazy and super dark. Bonus points for being a dog movie. Dog movies are all great.

86. Mr. Church
Guys, did you know Eddie Murphy was in a super dramatic feel-good tear-jerker this year about the unlikely friendship between an alcoholic jazz-playing cook and Britt Robertson doing that Britt Robertson thing? Well now you do.

87. Eddie the Eagle
The trailers for this underdog story were better than the actual movie, which I felt should have doubled down on the earnest rah-rah sports movie thing and just gone for that full 90s Disney vibe. It was cute, but it was no D3: The Mighty Ducks.

88. How to Be Single
Dumb but fun. Long live Rebel Wilson. Read my full review HERE.

89. A Bigger Splash
I can recognize that there are some really great performances in this totally odd film (mostly from Tilda Swinton, almost entirely silent the whole movie) and there’s some artful filmmaking but, honestly, I kinda just didn’t get it? It flew straight over my head.

90. War Dogs
This movie should probably be better than it is but it’s also not as bad as you probably think it might be. I love Miles Teller, I hate Jonah Hill- it all comes out in the wash in this “this got out of control fast” true story/cautionary tale.

91. The BFG
The BFG was my favourite book as a kid and Mark Rylance gives an absolutely perfect performance as the titular runty giant- all self-conscious principle and quiet longing- but the kid who plays Sophie is shockingly annoying and I couldn’t get past the overwhelming computer-ness of it all. It looked pretty but nothing felt tangible. If it weren’t for Mark Rylance’s face, I’d say this movie would be better served as an animated feature.

92. Rules Don’t Apply
There is a movie in this movie that is a good movie- it’s a coming-of-age/forbidden romance old Hollywood story between the charming Lily Collins and out-of-time dreamboat Alden Ehrenreich (seriously, are we sure that kid lives in modern day?). Unfortunately, that movie is buried deep inside this ridiculously long and dull vanity project wherein Warren Beatty tries to recapture something he’s never getting back.

93. I Saw the Light
This nicely shot, beautifully lit, super boring and emotionally disconnected biopic has one of those casts that makes a gal like me consider it unmissable (Elizabeth Olsen, Bradley Whitford, Hiddleston at the start of the year when he was still riding on Loki and Coriolanus goodwill and hadn’t yet grown a little tiresome). Alas.

94. Loving
I thought Joel Edgerton gave a great performance but nothing about this Oscar drama made much sense to me. The trailer made me cry but the actual movie was full of frustrating characters doing frustrating things. There’s something to the idea that not all people on the right side of making history are compelling heroes but cinematically speaking they could be a little more compelling than this.

95. The Invitation
I think the problem here was that I’d heard so much about this movie. I’d heard that it was a) brilliant and b) a horror movie. I think if I’d not know either of those things (and been expecting, say, a modest drama), the film’s cleverness might have snuck up on me. Alas, high expectations made for little patience when this started to bore me.

96. Suicide Squad
Conversely, I went into Suicide Squad with expectations through the floor. It didn’t really look like something I’d like (I’m so tired of villain narratives) and everyone hated this movie more than any movie I’d ever heard of, so I saw it expecting absolutely nothing. When I got a couple moments of enjoyment and didn’t viscerally hate Jared Leto, I declared that a modest win and called it a day.

97. Race
Another one that should have been more interesting than it was, this Jesse Owens drama was serviceable but shockingly unremarkable. The unspoken tension should have been sky-high in the Berlin scenes but the pressure was released way too easily in an ultimately pretty simple movie.

98. The Magnificent Seven
This actually exceeded my expectations. Chris Pratt’s final scene is great and Ethan Hawke is sublime (as Ethan Hawke always seems to be). I just really can’t get it up for a remake of a remake (unless you count You’ve Got Mail). If Hell or High Water is what can happen when someone in 2016 makes a new western, I can think of no reason why we should just be remaking the old ones.

99. The Neon Demon
Ummm…. it looks cool I guess? This was fucking weird, guys. I don’t even know. #expertcriticalanalysis

100. Florence Foster Jenkins
The trailers for this were delightful and I’ll admit to tearing up a bit when that loud girl backed Florence up but the tone of this movie was all over the place. It was weirdly dark but not satisfyingly so and I never knew what to make of the fact that I never really trusted Hugh Grant. Simon Helberg was fun, though.