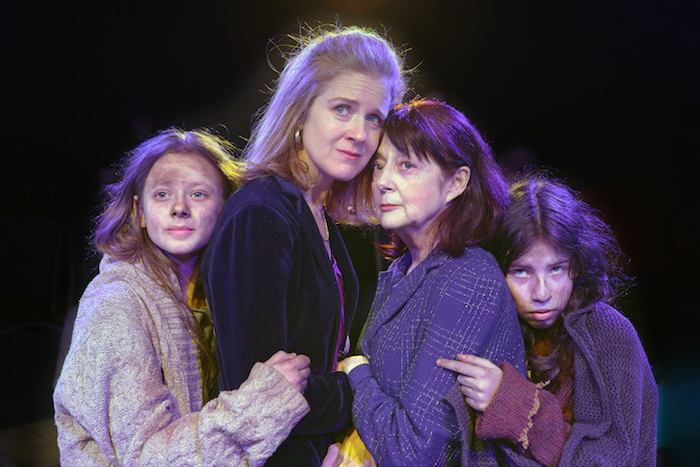 Jennifer Fell Hayes’ hauntingly beautiful new play Rosemary and Time explores the painful and joyous revelations that a middle-aged woman, Rosemary, makes about her past after a serendipitous meeting with a sister she had all but forgotten. With a backstory that could easily be a plot line on television’s Call the Midwife, Hayes explores the impact that relationships during childhood can have on a person long into adulthood, the complexities of developing healthy relationships and the many ways that people understand, show and share their love. Although some of the acting and directing decisions hinder this particular production, Hayes has taken an exceptional true story and crafted a rich examination of interpersonal relationships that is both mesmerizing and heart-wrenching.

Set in Yorkshire, England in the late 1970’s, Rosemary serves as a nurse at a local school where she has a pleasant relationship with Hilda, a housekeeper at the facility. After Hilda offers up some tidbits regarding her childhood at one of their afternoon tea breaks, Rosemary and Hilda discover that they are sisters – their impoverished family was torn apart after a fire broke out in their home in 1943 while their mother, Ruby, was out charming soldiers home from the war. While Rosemary finds joy in this familial tie, the revelation conjures dark memories, bad dreams and painful truths about the last night she spent with all her sisters, her birth mother’s role in the destruction of her family and the cold, stern treatment she received from her adoptive mother, Vera. Ultimately, it is Rosemary’s family who give her strength to face the trauma of her past and confront Vera about their tense relationship.

Hayes expertly weaves her 1970’s narrative with the ghosts of Rosemary’s past by having characters and scenes from Rosemary’s childhood move about, within and around the “present day” action – allowing the audience to experience minor revelatory moments alongside Rosemary. However, she does not rely solely upon Rosemary’s memory to drive the narrative. Rosemary and Hilda’s mother Ruby, a woman who remains quite a mystery to her daughters, speaks directly to the audience about the fire that destroyed her family and defends her life choices to the theatergoers – or, perhaps, struggles to convince herself that it was her circumstances, and not her choices, that brought pain on her children (breaking the fourth wall in the process). In totality, it is a powerful narrative, tackling mental health and grief, and the play acknowledges that all parents have flaws, make mistakes and often make child-rearing decisions based on their own childhood experiences (thereby causing a single generation to shape generation after generation thereafter). Hayes’ play can feel repetitive at times as layers of Rosemary ad Hilda’s backstory are introduced, but the climatic scenes between Rosemary and her sister Hilda and Rosemary and her mother Vera are engrossing and satisfying in that they define both Rosemary’s and Vera’s pain and provide hope that each woman will finally work through the horrors that have haunted them for so long.

Director Kathy Gail MacGowan’s and set designer An-Lin Dauber’s choice to stage Rosemary and Time in the round is a curious one as it frequently results in districting entrances and exits for the cast members who not only have to weave through the tight space but also sometimes lose their lines to the space when they are faced away from portions of the audience. That said, there is an appreciable  and necessary versatility to Dauber’s set design that allows for fluid movement between the ghosts of the past and the action of the present. Kia Roger has done a lovely job creating a lighting ambiance befitting the emotional tone of the show, and Megan Culley’s sound design highlights key moments in the action. Also, there is no denying that the show’s Beatles soundtrack energizes the audience and firmly establishes the era.*

Despite some revelatory performances, it is often the acting in Rosemary and Time that make the production slog along or stall. Although there are tender moments between the pair, Kate Grimes and Virginia Roncetti never quite develop a believable chemistry as Rosemary and her sister Hilda, and Roncetti too frequently drops or reaches for lines of dialogue, resulting in stilted conversations. Michael Markham portrays his dual roles of Leslie and Arnie, Rosemary’s husband and Ruby’s lover respectively, with a lovable oafishness but his acting occasionally comes across as over-rehearsed. Mary Katherine Harris tones down her treatment of Rosemary’s daughter Julie toward the end of the play but the character has been imbued with such a brash childishness that Julie lacks dimension – until the final act, she is simply loud, mean and insufferable. Despite these few missteps, there are beautifully constructed moments in the production as well. Judith Barcroft’s dour Vera is delightfully sharp-tongued and exquisitely portrayed as a complex, emotional woman who has spent much of her life drowning under the weight of a deeply felt loss. In her final scene with Kate Grimes, both women infuse the scene with such emotional gravitas that it is difficult not be moved by their stirring performances. Zoe Watkins similarly stands out in the role of Ruby, deftly presenting a nuanced performance as a woman whose insecurities, fears and pain linger just under a steely facade.

Ultimately, while there are frustrating elements in this particular production of Rosemary and Time, Hayes’ play based on real events is replete with emotional complexity and riveting story-telling and is well worth a trip to the intimate Paradise Factory Theatre.

*Although, my electric Fender is named Rigby and my acoustic guitar goes by Jude, so my critical eye may be a bit fogged by my adoration for all things Beatles.