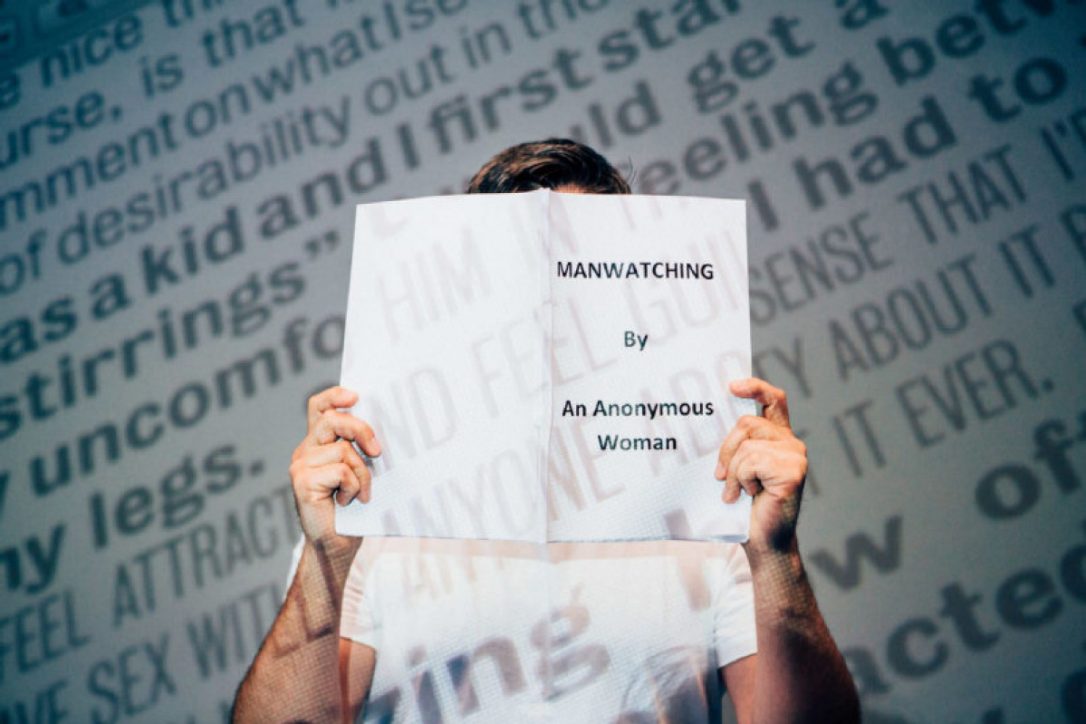 Manwatching is a one-man show written by a woman. That’s all I know about the author going in to see the show, because she remains anonymous. And each night a different male comedian sees her script for the first time, as he performs it.

This was such a weird premise for a show that I couldn’t help but be intensely curious about how this was going to play out for an audience. The night I attended, Gavin Crawford (This Hour has 22 Minutes; The Gavin Crawford Show) is the man in question. Even as the experienced comedian and performer that he is, he enters the room the way a university lecturer might, greeting the audience, explaining the premise, and obviously a bit nervous about the script, unsure of what to expect.

As he reads, the premise becomes clearer. It’s as though this woman – this anonymous author – is wearing him – his entire body – as a mask. She speaks through him, and soon after he starts, I see why: the story becomes deeply personal, in a sexual way.

This isn’t a story designed to provoke, however. It’s more like a confession meets a kind of dialogue in a theatrical setting. The author shares deeply personal details of her fantasy life, something she feels she can do precisely because we have no idea who she is. The mask she’s wearing is less a barrier and more of a bridge.

Using a man’s body, I think, makes it less uncomfortable for the audience. Maybe it’s just me, but I suspect that when a man uses graphic sexual language, it still feels less viscerally uncomfortable for us than when a woman does it. Each comedian is a body and a voice for this author, and is in a position of both vulnerability and power. He doesn’t know what the narrative is, how personal its going to get, and to watch Crawford react as he reads is delightful. His surprise, his amusement, his interest, and his respect for the work all come through. There are moments where a man performing this kind of material could easily (and lazily) stray into the arena of mockery, but Crawford remains on point the entire time. The overall experience is striking, powerful, witty, engaging, and resonates with a remarkable and unexpected authenticity.