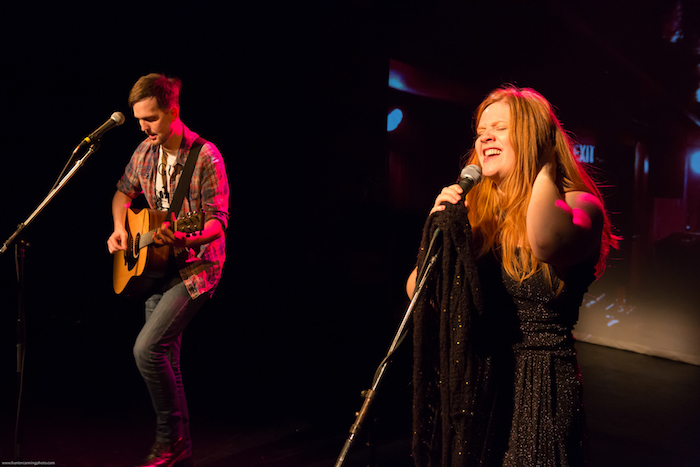 Greencard Wedding – Music from a Distance

Traversing the complexities of long-distance relationships, the United States immigration system and the hardships associated with being a young artist, Jody Christopherson’s musical Greencard Wedding is part band gig, part Skype call and part live action theatre inspired by true events. Currently playing at HERE in lower Manhattan, Greencard Wedding explores the legal barriers that prevent people of different cultures, backgrounds, experiences and artistic inspiration from telling stories together, and does so with an intoxicating soundtrack of Gaelic and English indie-rock melodies.

Greencard Wedding opens on a Brooklyn subway platform where Connel Byrne and Joy Fine meet following a show put on by Joy’s band. Discovering their shared passion for music, Connel and Joy start a relationship as they launch their own band, which performs classic songs and Joy’s own work. Unfortunately, Connel, an Irishman, soon discloses that his visa has expired and, with no alternative immigration opportunities available, Connel must return to Ireland while Joy stays in New York. The couple tries to continue their relationship via Skype but the program will not allow her to sing while he plays the guitar, preventing them from continuing to work on their art. The couple spars over Connel’s unwillingness to explore immigration options that might allow him to return to the U.S., Joy’s desire to continue performing live without him and the general frustrations of carrying on a relationship while thousands of miles apart. Between their late night/early morning chats, the audience catches glimpses of their musical work together, experiencing the unique sound and soul of Connel and Joy’s artistic bond.

The complexities in Connel and Joy’s relationship will prove familiar to anyone who has ever tried to make a relationship work from any distance – the occasional moments of jealousy, the pangs of loneliness and the long conversations about the future. Yet, underlying those recognizable moments is the uncomfortable truth that Connel and Joy are not knowingly spending time apart – rather, they are forced to live apart because of the onerous immigration laws in the United States. To the U.S. immigration system, Connel and Joy’s relationship is deemed unworthy of support because they are musicians and their skills are shared by thousands of Americans, thereby rendering their art together both unremarkable and unnecessary in the States. It is a frustration that many people from all over the world face in their quest to come to the United States. For some, it is the extraordinary cost associated with traversing the immigration system that bars entry. For others, it is traversing the often counterintuitive legal process alone that makes the process difficult. What diminishes the emotional impact of Connel and Joy’s struggle to reunite is that Joy never seems willing to reconnect with Connel in Ireland instead. While its true that there are large numbers of musicians filling Irish pubs nightly, the demand for musical talent in Ireland is arguably no less than in New York City. So why, I found myself wondering, did Joy not once consider flying across the sea to perform with Connel abroad rather than lamenting his inability to rejoin her in New York City.

Admittedly, I have a bit of a soft spot for the genre of music featured in Greencard Wedding, but the Irish-influenced, indie folk rock score is hypnotic and generally resonates with the tone and themes of the musical. However, some of the band’s gimmicks, like inviting a person onstage to wear the musical set list and handing out whiskey soaked cupcakes, work far better in a crowded pub than in an intimate theatrical setting where the interaction does more to disturb the carefully crafted setting than to invigorate it. Initially, I was worried that the numerous video segments in the show would have the same detracting effect but was pleasantly surprised that, but for a few moments when live action and the video did not appear quite in sync, the transitions between the video and stage scenes were seamless.

Much of Greencard Wedding’s success as a show stems from the musical kinship between actors Jody Christopherson and Ryan McCurdy, Joy and Connel respectively, who in addition to performing these fictional roles also perform together as the band Greencard Wedding (in real life, if that makes any sense – the musical is named after the band). While the video segments are essential to forward the plot of the show, the highlights of the production are when the duo perform as the band, and I would love to see Christopherson and McCurdy perform together in a pub sometime. Particularly moving is their rendition of Leaving on a Jet Plane and Connel’s rendition of U2’s With or Without You during pivotal, trying moments in their relationship.

Greencard Wedding is as relevant in today’s political climate as it was when it was written (perhaps, more so), and the band’s soulful musical arrangements provide a moving soundtrack through which to explore struggles and frustrations common in many relationships. Despite some distracting plot choices involving the band’s live shows, the musical melds digital artistry, musical compositions and live theatre into a charming show that explores the arbitrariness of the U.S. immigration laws, the value of artistic collaboration and the frustrations of love.