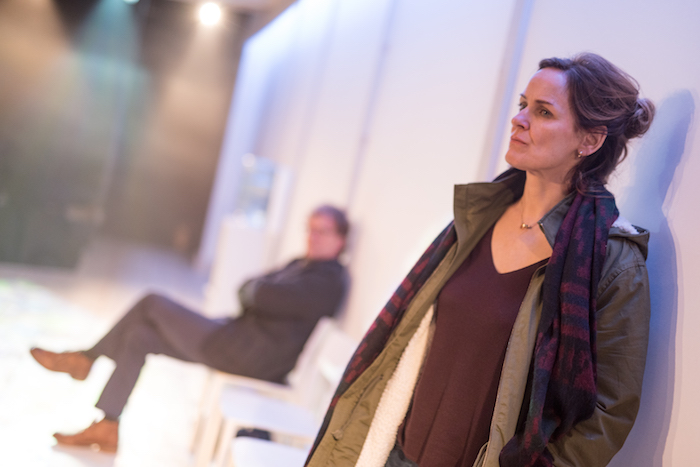 Poison at The Coal Mine

Poison, currently on at The Coal Mine Theatre, is a story about two people. Actually, it’s a story about three people. We open on a man (Ted Dykstra) waiting in a lobby. Eventually, a woman (Fiona Highet) enters. There is immediate tension.

What follows is a simple but heartbreaking story about grief. Originally written by Lot Vekemans and translated into English by Rina Vergano, the play shows us two people who were once married and in love, until the sudden death of their small son.

Over the course of an hour, Dykstra and Highet discuss the past ten years of their characters’ lives, and how they feel about their lives now, their loss, and themselves. It is at once unsurprising (one has spent years spinning in grief, the other has attempted to process and move on) but nuanced, heartbreaking, beautiful and painful.

Grief is one of the hardest emotions to process in our culture. Part of this is because it’s not really just one emotion. Anger and sadness and happiness have structures that are simpler, they are more prominent in public narratives: we see them pictured for us in action movies, romantic comedies, dramas, and even Pixar films. We don’t have many narratives about grief.

I lost my father a few years ago, and the therapist I had at the time – an 80-something Argentine lady – gave me advice I will never forget: “North Americans don’t know how to talk about death. Prepare yourself for the stupid things people will say to you.” It was one of the best pieces of advice she bestowed on me. Despite her condescension, she was right: we don’t have the cultural resources we need, because we get uncomfortable when it comes to death. We don’t talk about it, and so we don’t know what to say. People are full of well-intentioned yet dismissive platitudes: “They’re in a better place,” or “It was for the best.”

Being on the receiving end of these banalities can be infuriating. And grief is a windy, bumpy path. It’s a complicated amalgamation of cluttered feelings: guilt, sadness, relief, resentment, alienation, more guilt, anger, fear. More guilt. Loneliness. It ebbs and flows and stagnates and blindsides. Sometimes guilt arises when you manage to move through it, as though it does a disservice to the person being grieved, as though ever feeling happiness again is somehow undeserved or an insult to their memory. But it’s destructive to spin inside grief, to let the anger and resentment consume you. Yet we talk about it like it’s something that you have to ‘get over’ – as though we put it in its place: we package it up, or push it down, or put it behind us. Grief is less an object that needs to be placed somewhere; instead it’s about figuring out how to balance all of those feelings at the same time. How to learn to feel happiness and sadness at the same time. Figuring out a way to heal and move forward that also honours the memory of the deceased can feel like trying to solve a Rubik’s Cube of emotions.

But enough of my strained metaphors. The point is, this is the kind of story we need to hear. And this production of it stripped it right down to its essence. Director Peter Pasyk doesn’t try too hard to tell us this story. Instead, he lets it breathe, and exist, and speak for itself. The set is simple: four chairs and a water cooler, simple and nicely framing the space, creating a platform for what matters about this play: the dynamic between these two. Their history, the story of their break up and how that is bound up in their grief.

Dykstra and Highet have excellent chemistry, and do a remarkable job from the top of the show of giving us a palpable sense of their history. The push and pull of the dialogue, the obvious historical narratives they have of each other and the way they relate, the way they project and dismiss and anticipate – it all resonates as visceral and authentic. The overall effect feels like something between a wrestling match and a waltz: at times beautiful and predictable, at others violent and unsettling, and, as evidenced by the constant tears running down my face, often deeply moving.