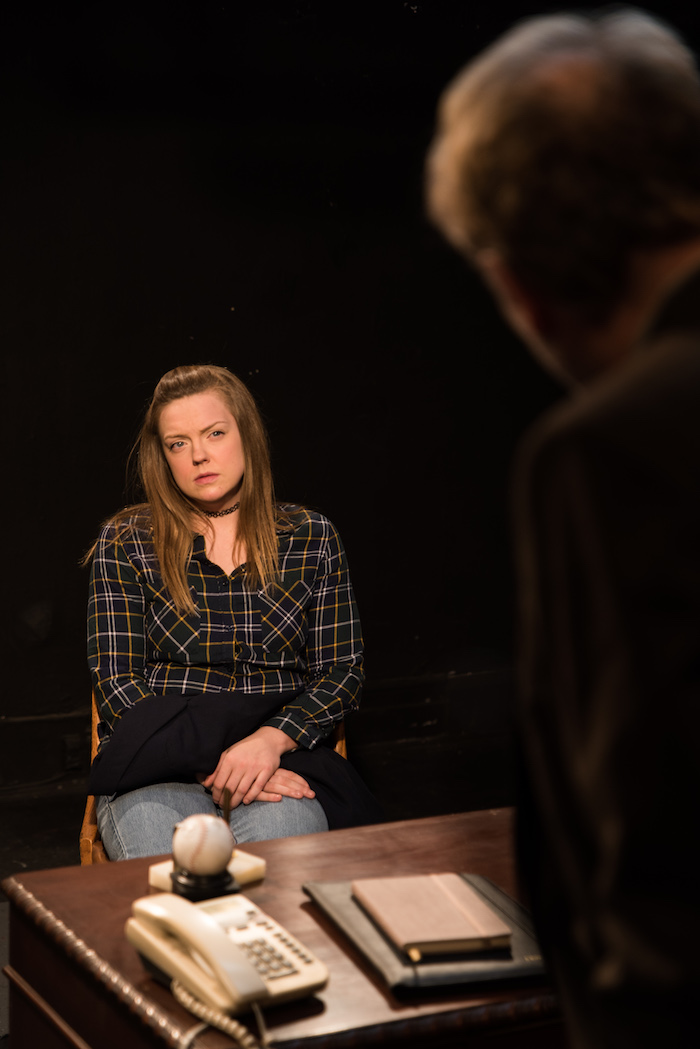 My expectations were high going into Oleanna at Red Sandcastle Theatre. Grace Gordon and James McGowan are extremely accomplished both on stage and on TV. The play tackles very relevant material about power dynamics, authority and sexual harassment.

Carol (Gordon), a young student, seeks to address her failing grades and confusion with course concepts by visiting her professor John (McGowan). McGowan’s strong abilities permit his character to morph eerily between thoughtful/caring and pompous/arrogant, regardless of how fine the line is. Yet, I often found myself anticipating when the stakes would be heightened given that the dialogue feels very repetitive. While we want to believe John is as eager to help his student succeed as he says he is, it feels as plausible that his intentions may not be what they seem.

On one hand, the dialogue presents us with a sophisticated debate about the role of education and the position of an educator. Must the lecturer and format of the lecture reflect the material being taught (in this case sociology of education)? Can one teach progressive theories and be disconnected from them? Many of us can relate to Carol, a young girl who is not from a wealthy background, knows the value of hard work, and sacrifices a lot to attend university. Her professor occupies himself – in the middle of encounters with Carol – on calls having to do with the purchase of a new home that is dependent on receiving tenure. Carol unyieldingly leads him to show that he may have experienced even fewer obstacles in his life than the already mysterious ones he refers to. The piece certainly sparks many questions about the impact of privilege in the workplace

On the other hand – relatedly – Oleanna’s second and third scenes shift into an incredibly tense conversation about abuse of power, and sexual harassment. Previously reserved and motionless, Carol claims to have organized a committee of women who have all experienced mistreatment at the hands of John. Being in the midst of the #MeToo movement and countless cases of sexual abuse being exposed across the continent, I sympathized with Carol’s accusations against her professor. Her tone and body language, however, seemed, for the most part, static. I was personally confused at the passage of time. I thought a whole semester had gone by, but then John is still dealing with calls regarding the new house. Transitions between the scenes are staged simply by director Allegra Fulton, using tableaus followed by minor costume changes visible to the audience. Stronger direction, lighting, and costume elements could have aided in making the transitions more interesting and purposeful.

What the play does well is use academia as a microcosm of society without the need for predator/prey clichés or unnecessary sexualization on stage. Fulton wisely chose to set the piece in 1992 when it was written. We might, thus, come to the dismal conclusion that very little has changed in the last 25 years when it comes to understanding abuse of power in the workplace. Some research on this difficult to digest play will surely uncover people keen on determining whether Carol’s accusations are true. But I think this play is about the contrary. We cannot know if they are, and that’s the point. Unfortunately, when it comes to sexual harassment, because it usually happens in private spaces, perpetrators cannot be proven guilty beyond reasonable doubt. Therefore, no matter how compassionate we are and how high we stand with victims, sadly the reality is that victims are either shamed or left to suffer silently. Perhaps, this explains the characters’ inability to evolve here. What has changed is the volume of brave people who speak up, and there lies the hope.

All in all, the slow delivery and awkward staging left me a little underwhelmed, despite very interesting material. Perhaps, it was just a case of the opening night blues.