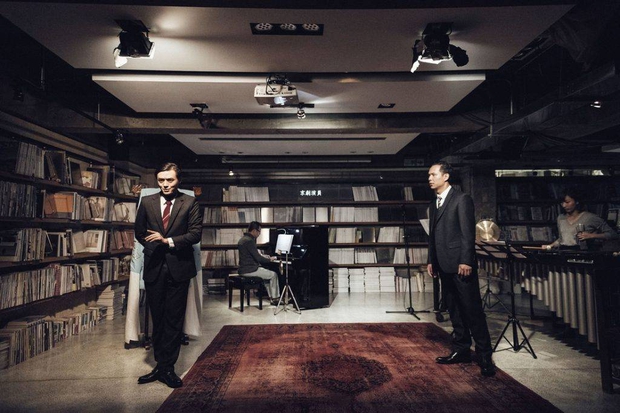 Mr. Shi and His Lover

Inspired by the true story of an opera singer and a French diplomat, Mr. Shi and His Lover is a semi-operatic play currently on Tarragon’s mainstage. The narrative traces a story in which the two fall in love, and proceed to have a twenty year relationship, during which time Mr. Shi believed his lover to be a woman. This production investigates the emotional life of both of these characters.

When the truth of his lover is revealed, Mr. Shi struggles to reconcile the real love he felt (feels) with who he understands himself to be, and who he thought this person was. Was it all a sham? What does this mean for his identity? The production asks a lot of questions about gender and performativity, often drawing parallels with what it means to be a diplomat, and the reality of how our identities are part performances and social constructions, while also having an undeniably palpable reality.

Much of the story is told through song, with some intermittent spoken text. This is not the kind of style that normally resonates deeply with me, but the style, the performances, and the story all work together in a way that allowed me to connect with the musical element of the show in a way that I found surprising. The production is, appropriately enough, aware of itself as a performance, with the musicians visible, playing right at the back of the stage. A pianist (Njo King Kie) and a marimbist (Yukie Lai) perform almost constantly throughout, providing both music and ambient sound to augment the singing. The music of the production is inspired by both Chinese opera and also vintage pop from both the East and the West.

Both performers Jorden Cheng and Derek Kwan do an excellent job and, although we don’t actually see them interact that often on stage, they have a kind of fraught connection with each other that is entirely believable and moving.