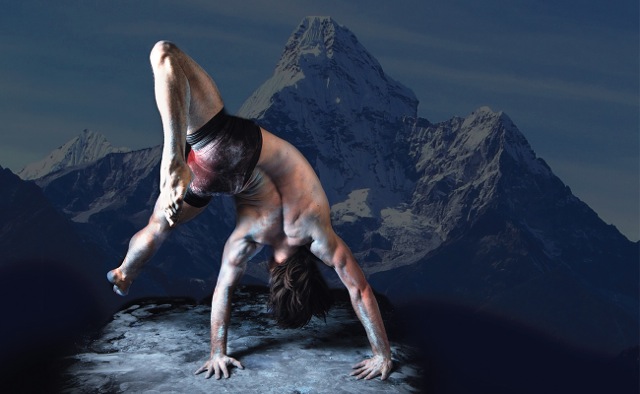 Red Sky Performance’s Backbone, playing at Canadian Stage from Nov 2 to 12, is the first production of a two year residency at Canadian Stage—to be followed up in 2018 by Trace. This multi-year residency is the first of its kind given to a dance company by Canadian Stage, and it seems most appropriate that Canada’s premier Indigenous performance company be offered this platform. Backbone was commissioned and co-produced by the Banff Centre for Arts and Creativity. Conceived by Artistic Director Sandra Laronde of Teme-Augama-Anishinaabe (People of the Deep Water) in Temagami, and co-choreographed Jera Wolfe (Metis) Thomas Fonua (New Zealand), Sandra Laronde, and Ageer (Inner Mongolia), the work is performed by a strong cast of dancers hailing from Canada, Australia, New Zealand, and Inner Mongolia.

Backbone is crunchy and visceral. Early in the piece the ensemble moves together in a way resembling a spinal column, it is uncanny and discomfiting . Later their bodies heave, sucking in air, the act of living, moving, breathing rendered effortful. The dancers are other than human, the athletic choreography emphasizes the dancers musculature and bony structures… perhaps embodying the forcefulness of moving tectonic plates.

In a pre-show talk on opening night, Laronde shares that the inspiration for this work is a desire to reframe our view of nature and earthly structures, to recognize the land as a living sentient being. She described the Rocky, Sierra Madres, and Andes Mountain ranges as one long chain creating Earth Mother’s spine—as spirited and alive as the human spine is.

The live percussion accompaniment (combined with pre-recorded beat-boxing and throat singing) is heart thumping and relentless, a constant pulsing beat. We get a small reprieve from the hard hitting pace of the work with a duet between contortionist Samantha Halas and Jera Wolfe. They move together at a different rhythm than the rest of the piece, their entwined bodies projected onto a back screen gives the audience a kaleidoscope-like bird’s eyes view of their quieter flowing movements. Halas and Wolfe’s duet is reminiscent of a graceful and intentional glacial flow.

Laronde shares that Indigenous mapmaking follows contours rather than grids, and in naming a feature or landmark the intent is to convey something meaningful about the site. For example, naming a place to signal the crossing of two rivers, rather than naming the site after a person. This reference to mapmaking highlights a key way in which land is understood in the modern Western world, a very colonial understanding of mountains as lifeless land masses for tunneling through and around, never considering the possibility of a grander sentience moving through the earth in relationship to us.