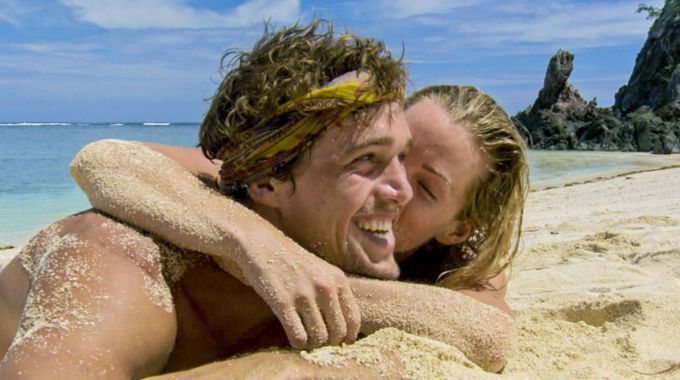 Welcome back to Bachelor in Paradise – I mean, Survivor season 35! Hormones and virgins and just a little bit of strategy abound as we cap off the final week before the Healers, Hustlers, and Heroes are shuffled together in next week’s tribe swap.

We start on the Hustlers beach, where Ryan and Patrick are putting in serious work repairing creepy images by… wearing the clothing of a female tribe member voted out last week. Ryan also refers to Ali as the “most relatable female” on the tribe, which is both insulting toward Lauren and me as a viewer for having to listen to him refer to a woman as a “relatable female.” Incidentally, Ryan’s beard makes him look like the least relatable hobbit in Middle Earth. Also, Patrick is super publicly looking for the idol, causing Ali to tell him to cool it, which Patrick finds irritating because it “takes away from his personality,” which, in his incorrect view, is a bad thing.

At Camp Hero, Ben gives us a quick analysis of all of his tribe members. He says JP walks around like he doesn’t know what’s going on. Yeah, “like.” He says that he and Chrissy are still driving the train, which is exciting because I like this pair, but he also says Ashley is “fun,” so I’m not sure if he really has his finger on the pulse. According to Ashley, “something happens inside of” her when JP returns from the ocean with a dead animal on his spear. I believe this feeling for me would be nausea. Ashley is still hung up on getting Alan out, because his (accidental?) strategy of making it so that Ashley and JP can’t speak to one another without seeming threatening is working out beautifully, unlike Alan’s ability to open coconuts.

As for the Healers, Joe is concerned that Cole is going to tell Jessica about his idol, since Cole has come down with a severe case of love bird disease. But this disease has no cure as Jessica and Cole continue to flirt, even though Jessica claims she doesn’t even know what romance means, probably because it is a word with more than one syllable. Yet somehow, even though Most Beautiful Person Alive 2017 Desi is right there, Jessica is Cole’s dream girl, so he shares the information about Joe’s idol with Jessica. Jessica takes this as a sign of true trust and bonding, until about 5 minutes later in the episode when Cole also tells Desi and Roark about it in an effort to put together a plan to blindside Joe. Joe is being super obnoxious about the food, spitting out potatoes and throwing them into the woods, and his attitude combined with his idol power makes him tempting to blindside. Plus, as Roark astutely points out, Joe is so hell-bent on getting Mike out, he may have tunnel vision and never see it coming. We haven’t seen much from Roark, but she makes good use of her limited screen time and is definitely a strategic brain to watch moving forward.

The challenge is for immunity and chickens, and the real difference-maker is the throwing of beanbags, during which Patrick will not let anyone sub in for him despite his tribe falling behind. Specifically, former softball player Lauren is shut down when she asks multiple times to tap in. In Patrick’s defence, he later says that “by looking at her,” Lauren probably wouldn’t have helped much, which is definitely appropriate and not at all shallow and cruel. Though a snafu involving the healers missing a block to stack makes the challenge exciting, it is the Hustlers who are headed to tribal council once again, leaving the Heroes with first place and the Healers in second. From my perspective, this is the ideal outcome, as the Hustlers have proven to me to be the tribe with the fewest early standouts, and this all looked like it was leading up to an inevitable Patrick exit, which I am more than fine with.

Back at camp, Patrick feels sure that Lauren will be voted out, so he tries to make her feel better, which doesn’t work because Lauren has a very specific superpower which is always being able to tell when a redhead is lying. At tribal council, we go back and forth between Patrick’s potential to help them in challenges and at camp vs. his unpredictable nature, and the obvious underlying tones of Lauren not fitting in with the young crowd. Devon is still a person who is on Survivor, and now exists exclusively for reaction shots. Ryan makes a few more incredibly forced metaphors, shoehorning in that he’s never been in a relationship. Ryan constantly makes me think of the scene from the Social Network where Rooney Mara tells Jesse Eisenberg that he’s going to go through life thinking people don’t like him because he’s a nerd, but actually it’s going to be because he’s insufferable. Anyway, back to the matter at hand, the tribe votes unanimously for Patrick, leaving him blindsided and with some very harsh words, and leaving me fully on board for where the rest of the season is going once these tribes mix up.

Until next time, here’s hoping your week is as exciting as a kiss on the cheek is to Jessica.