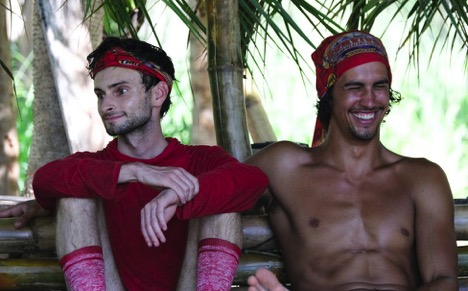 Well, Survivor, I’m disappointed but I can’t say I’m surprised. But before we get into this week’s elimination, let’s recap all the goings-on with our heroes, healers, and hustlers.

The Heroes Tribe returns from their unanimous tribal council with fractured alliances and an excited Chrissy. She has endless (well, four) alliance possibilities and an expired immunity idol which she can use as a decoy in the future. In her words, “It has no power, but it still has power,” just like I used to say about my position in my unpaid internship days to make myself feel better. Chrissy spends her time in this episode on the prowl for a perfect alliance mate, and it’s much like Goldilocks and the Four Heroes: JP is too dumb! Ashley is too shady! Alan is too unpredictable! But with his social game and nonthreatening cowboy hat, Ben is juuuuuust right and the two buddy up for an under-the-radar brains and brawn partnership. I love Chrissy, and I’m very excited by the sight of a woman over 40 as the obvious strategic brains of her tribe, but my overplaying senses are tingling and I’m worried she might be caught with her hands in too many cookie jars. The best case scenario I can see for Chrissy is getting swapped over to a tribe with Ryan and having those two work something out, but if she’s not careful she’s going to get caught working too hard to overcome her mom status and get taken out premerge for being too threatening and controlling.

The only other thing happening on Hero beach is that JP caught a lobster, and bemoans the fact that he’s labeled as a “power couple” with Ashley without actually getting all the “benefits” of being in a couple, which makes my skin crawl. This also somehow relates to being a firefighter in a line of thinking I didn’t bother to trace.

On Hustlers beach, Ryan says his tribe is “feeling good about itself” which is Survivor-edit talk for “This tribe is going to tribal council tonight.” Devon and Ryan are still very romantic and tender with one another, and they’re aiming to get out Simone. You see, Simone is weird, according to the bellhop wearing knee socks and a turtleneck on an island. She just doesn’t quite fit in. This is upsetting to me for two reasons: One is that I personally find Simone very fun and charming. The other is that in the last eight seasons, ten Asian American women have played Survivor, and only 2 have even made it past the first four boots – season 29 winner Natalie Anderson and season 30 merge-maker Shirin Ooskoi, who would the very next season be voted out second. No east Asian women have made the merge since season 26, in which returnee Brenda Lowe made it happen. I’m not able to say whether this is a product of casting or bias or coincidence, but it is really disappointing to have such a dearth of successful Asian women on this show, so I was rooting for Simone.

From Simone’s perspective, she’s not an outdoorsy person and is doing her best to contribute to her tribe. Ali sees her as a potential resource, but what Ali tells the camera doesn’t seem to correspond to the reality on the island. Ali tells us that Simone could be loyal to her, and that she could mold her to do whatever she wants, which doesn’t seem to match up with the independent thinking we see from Simone, nor with the threatening vibes she gives Ryan. Simone seems sharp and like she’s out here for blood. She also comes off as someone I would be friends with in real life, from what little we see of her, given her intensity and a funny moment or two. Ultimately, it was probably better Ali went with voting out Simone, since she does not seem like the type to ever be a loyal foot soldier, but it did not make for the television that I wanted to see.

Meanwhile, Patrick is super annoying and I’m not the only one who thinks so. Fisherman Lauren is getting extremely tired of his nonsense. Patrick is afraid of crabs. He speaks loudly and often. He has too much energy. He is just generally an enormous doofus. From Patrick’s perspective, he’s just trying to make sure everyone’s having fun! Because what does everyone in the world find fun? An incredibly annoying 20-something, that’s what. Except for Lauren, apparently. But she is demonstrating some stellar self-control and self-awareness in knowing that she’s the only older person on the tribe, and as such needs to do her absolute best to integrate into the tribe and not set anyone off. She works closely with Ali and will demonstrate in her behavior and her vote that she’s willing to be a team player. I’m surprised and impressed with Lauren here, and hope the hustlers avoid tribal council next week where she may find herself on the bottom if the boys on that tribe decide to bro down.

We don’t see too much of the always-golden Healers tribe this episode. Cole and Jessica are flirty, but Cole worries he is too young for the 30-year-old Jessica. Meanwhile, I am 22, and completely age appropriate for Cole, just saying. Joe and Mike talk to Desi about her time as Miss Virginia, which prompts Joe to call Mike “one ugly dude” which is not what I call a good social game. Despite his ugliness, Mike seems to be growing on Joe, defusing their contentious relationship from all the idol talk last week.

Speaking of idol talk! Joe is left alone for 10 minutes for unexplained reasons and manages to find a clue to an idol that he totally whiffs on. Only through Cole explaining to him what the clue actually means can Joe ultimately discover the idol, which feels like a major missed opportunity for Cole to just grab that thing for himself. For Cole’s part, however, he seems more pleased that he has used his sharp wilderness skills to enable his tribe mate to do something for himself, seemingly forgetting that Joe is 34-year-old competitor, and not a troubled teen at Cole’s summer camp.

The immunity challenge entails a lot of Devon holding his breath and a puzzle that involves the names of previous filming locations. Simone and Ali can’t come through on the puzzle despite their lead, and this puts the crosshairs even more firmly on Simone. She tries to leverage Lauren’s animosity toward Patrick, and it comes down to Ali and Ryan deciding where they’re going. Patrick is an asset in challenges, but he’s unpredictable. Simone has nowhere else to go, but she could be strategically dangerous. Yet despite the show’s best efforts to make this one seem like a real nail-biter, I’m going into tribal council with a very sinking feeling for Simone.

At tribal, Ryan has an extremely long metaphor about birthday parties that is very forced and doesn’t make a lot of sense here, much like Ryan himself. Simone brings up the (very valid!) point that this is not old school Survivor, and that basing a vote off of challenge performances instead of social relationships is short-sighted. I have to agree with her here, especially because these people must be expecting a swap soon, meaning basing votes on challenge performance would be very silly and impulsive. I’m willing to give Ryan and Ali enough credit to say that this was a strategic decision on their part based on the fact that Patrick can barely string a sentence together let alone formulate a strategic plan to go against them, making him a more predictable ally, and I really really hope this vote had nothing to do with challenge performance. [Editor’s Note, aka “Kelly butting in on Lita’s column”: It was the pre-show relationship that the editors are determined not to acknowledge! Ali’s got her old college chum in her back pocket, or at least the devil you know, you know?]

The votes come back unanimous for the second week in a row, and I am beside myself with grief, though am not shocked by this result. Here’s hoping for some more dynamic strategy and a little more unpredictability next week, and that someone besides a spirited woman outside of the typical demographics of successful Survivor players goes home.

The good news, at least according to Jeff Probst, is that when hustlers get knocked down, they get back up. Let’s hope we can all do the same after this week’s vote.