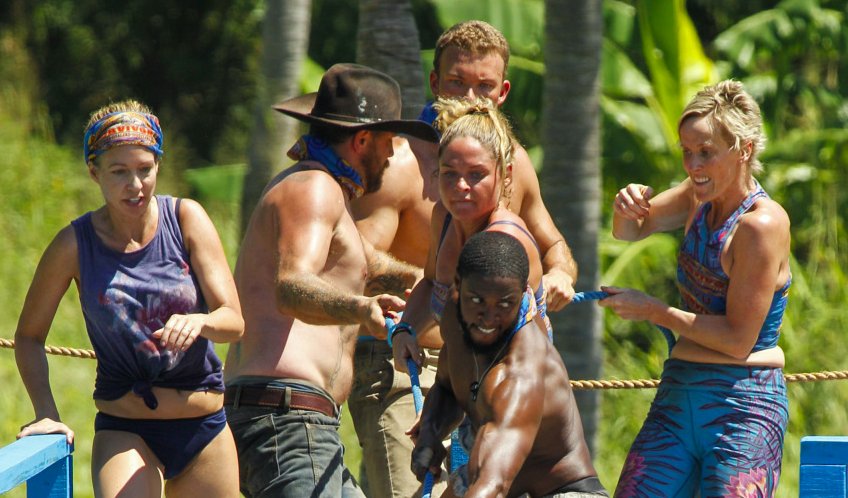 Welcome all to a brand new season of Survivor, where this year’s theme is as forced as Ryan’s witty self-deprecation! I am your humble recapper for season 35: Heroes vs. Healers vs. Hustlers, and I will be taking you through all of the twists, fights, and vomiting each week so you don’t have to remember which contestant is JP and which one is a literal tree stump, since they are easy to confuse.

Episode one, entitled I’m Not Crazy, I’m Confident, begins, as usual nowadays, with the marooning: The castaways are dressed in their best business casual to be told what arbitrary categories they’ve been shoehorned into this time around. Host Jeff Probst claims that the tribes are designated by the positive traits that other people associate with each player, which is another way of saying “based on their current job.” Early standouts on the Heroes tribe include marine veteran Ben Driebergen and actuary Chrissy Hoffbeck, who is a hero by virtue of being both a woman and smart at the same time. Next are the Healers, a team on which Cole Medders, who speaks about being a wilderness rehabilitation guide for troubled youth, certainly belongs since looking at his face and body certainly heals whatever ails me. Finally, we have the Others – I mean Hustlers – who, according to Probst, are known for their work ethic, and no matter what they “get it done, 100%” which is exactly the kind of nose-to-the-grindstone attitude I associate with surf instructors. Ali Elliott, personal assistant to YouTube sensation Glozell Green serves as the representative for this kind of tireless and thankless hustling existence, in which she sometimes has to do makeup but also sometimes has to cook. I simply cannot imagine her exhaustion. Ryan the bellhop informs us that he has no girlfriend and doesn’t drink alcohol, which somehow corresponds to making him an undesirable alliance mate, so he’s going to have to hustle extra hard.

Each tribe is given 30 seconds to collect as many supplies off of the ship as possible before getting into a boat and rowing toward the beach to reach a flame. The first two tribes to arrive will receive some form of fire, and the ensuing chaos doesn’t disappoint. Probst notes that “Out of the gate, it is chaos,” and chaos it is. Patrick is launching pineapples like a quarterback! There are melons everywhere! Ryan doesn’t let his lack of a girlfriend stop him from getting a secret advantage! Ultimately, however, the hustlers don’t hustle quite fast enough and are going to camp without fire.

Meanwhile, the hustlers get to go back to a massive burning flame, which social worker Roark Luskin describes as the biggest fire they’ve ever seen, which makes sense since all of the regular Burning Man attendees are likely on the hustlers tribe (looking at you, surf instructor Devon). Nurse Jessica Johnston is immediately crushing on Cole, because she is a human person, and Joe seems ready to play the villain. For my money, this seems like the most dynamic tribe with the most real contenders. Fortunately or unfortunately, however, we may not be spending much time with them as they look pretty formidable in the challenges, meaning we may not see their strategic dynamics come out for a little while should they continue to avoid tribal council. Some groundwork is laid for alliance-making between healers, with Joe and Dr. Mike Zahalsky, the urologist, clashing over Mike’s sneaky behavior in looking for the immunity idol right off the bat.

Over on Heroes beach, drama ensues from the jump. Lifeguard Ashley Nolan and firefighter-slash-human-thumb JP Hilsabeck immediately begin a flirtation, which does not sit well with former NFL player Alan Ball, with whom JPAshley (AshP? This is an impossible duo to make a couple name out of) believe they are in an alliance, along with Ben. Alan believes the two to be a power couple who must be broken up, so he extremely logically decides to accuse JP of having the idol and force him to strip down in order to prove he doesn’t. Ashley then chews him out, and the word “trippin” is used at least 6 times. Alan tells us that he is simply attempting to sow distrust and turn the target on those two, which seems like a convenient excuse for crazy and paranoid behavior which might in fact make him stick out as a target. Ben wants to stick with the younger people so that they can vote out the “mom squad” of Chrissy and Katrina, who are holding back the tribe physically, despite the fact that Katrina was a literal Olympic swimmer in a game that will presumably involve many swimming challenges.

On Hustlers beach, we learn that Ryan’s advantage is a super-idol, meaning it can be played after the votes are read, but it can only be used at the first tribal council. The twist is that if his tribe does not go to the first tribal council, he must gift it to someone on the tribe that does, though that person will not know who gave it to them. Ryan ultimately ends up giving it to Chrissy due to her status as an outsider on her tribe. I like this twist because while idols are valuable, the most valuable advantage is a loyal ally, and should Ryan and Chrissy end up on the same tribe, he automatically has a leg up on gaining her trust when he informs her he was the one who gave her the idol. It’s also something that no one else can lie about, because this twist has never been seen before. Ryan tells Devon about the advantage, believing they can make a strong but unlikely pair between Ryan’s brains and Devon’s stubbly goatee that he for some reason came to the island sporting. Based on what I’ve seen, I don’t believe Devon is the type of player to do this, but I would love to see Devon take credit for giving this idol to Chrissy down the line, if only because I enjoy seeing new twists make for different strategic opportunities. Also, the Ryan/Devon scene reminds me of Millennials vs. Gen X, in which Adam Klein perhaps unwisely shared information with the Devon-esque Taylor, who had every intention of screwing him. In that case, I was glad Adam came out on top, but I would be interested to see this kind of partnership swing the other way, particularly because Ryan’s chatter about no one ever wanting to get into his pants is going to get old very quickly.

The first immunity challenge involves careening on a cart and choosing table mazes, and results in the Heroes being first sent to tribal council, a shocking result given the overall physical ability of the tribe. I guess Ashley has never had to guard someone’s life by dropping a ball into a divot. Chrissy collapses on the ground vomiting, which is, unbeknownst to her, the best strategic move of the night. Her visible weakness likely solidified Ryan’s choice to give her the idol, since it’s in Ryan’s best interest to gain the trust of someone on the outside of their tribe and cause dissonance in other tribes by saving the person most likely to go home. I wonder if this will usher in a new strategy in which by season 37 we will see everyone competing to look the most ill after the first challenge in the hopes they will be gifted an advantage.

Back at the beach, the Heroes are in disarray, with Alan still seemingly interested in breaking up Ashley and JP. He agrees to vote for Ashley with Katrina and Chrissy, believing they will pull in Ben as well. Chrissy finds Ryan’s idol in her bag and claims that she will allow the discussion at tribal council to dictate whether or not she plays it, even though the whole power of the super idol is that it can be played after the votes are read, meaning she doesn’t need to rely on the discussion to know whether or not she can play it. However, this ends up not mattering at all because the tribe unanimously votes for Katrina, despite the show giving us few clues as to how this came to be. Chrissy chooses not to play the idol for Katrina, even though it can only be used at this tribal council, indicating that this vote must have been much more solidified than we were led to believe. For now, the heroes remain united, at least in their votes, with Ashley and JP and Alan and Ben as seemingly tight pairs. My hope is that should this tribe return to tribal council, Chrissy will serve as the swing vote rather than the outsider who is easy to pick off, because I see a great deal of game potential in her. As for the premiere, I am very sad to see Katrina go, I think she had a lot of moxie and it’s always disappointing to see someone that very few people believed would do well prove them right.

Overall, this will not go in the pantheon of incredibly memorable premieres, but it did do solid work in setting up some key relationships and characters moving forward. I’m optimistic about this cast, which seems to have a particularly diverse and strong field of women. They seem like a group that will keep it civil and fun, are here to play, and will hopefully provide a rebound after the predictability and perhaps let-downs of its predecessor Survivor: Game Changers. That’s my perception anyway, and as Dr. Mike says, “Perception is 90% of reality.” I’m looking forward to breaking down all of those perceptions and misperceptions over the course of the season, and hope you will join me.

Until next week, here’s hoping you are given all the advantages, even if you are a hustler.