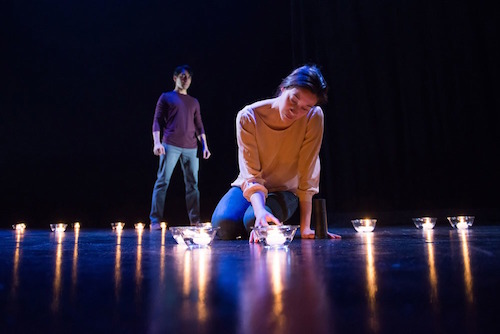 Director Ravi Jain’s adaptation of Salt-Water Moon distills the classic Canadian play by David French to its essence: two lovers under a star-filled sky. The story centers on the return of Jacob Mercer to Coley’s Point, Newfoundland after his abrupt departure for Toronto a year earlier. Although his old flame Mary Snow is now engaged to Jerome McKenzie, a wealthy schoolteacher, Jacob is intent on reigniting their connection. Stripping away the Newfoundland accents and the 1920s porch setting, this reimagining also swaps Mary’s period yellow dress for contemporary jeans and a blouse. The result is a simple, but charming, love story about two people overcoming past wounds.

Ravi Jain’s adaptation originally premiered in 2016 as part of the Factory Theatre’s “Canadian Classics Reimagined” series, which challenged directors to create bold, new interpretations of well-known plays. His minimalist staging and choice to cast the play with visible minority actors does just that, giving Salt-Water Moon a timeless feeling that should resonate with audiences of all ages and backgrounds.

It’s an adaptation that asks the audience to be a part of the process, requiring that we use our imagination to build the world of the play based on guidance from David French’s original stage directions, which are delivered by narrator Ania Soul. Soul also sets the scene, providing musical accompaniment before and during the show, with a controlled and strong voice that never overpowers the action.

Although the actors in this production chose not to use the Newfoundland dialect, they speak French’s text word-for-word with all its uniquely Newfoundland turns of phrase (such as “what odds?” instead of “who cares?”). Spoken stage directions are also deliberately disregarded by the actors. I initially found these choices to be quite jarring, but once I got used to this approach and gave my imagination free reign, I really enjoyed the play.

Instead of period realism, this production of Salt-Water Moon has an abstract ethereal quality to it. In a clever choice, the minimalist set consists almost entirely of dozens of tea lights, which stand-in for stars and evoke a romantic and otherworldly atmosphere. Mary no longer gazes at the stars through a telescope, but lights candles on stage, pointing out blue and red “stars” to Jacob.

Such a stripped down adaptation of a play demands strong central performances, and Salt-Water Moon delivers. Kawa Ada charms from the get-go as the cocky Jacob, but his performance becomes more nuanced over the course of the play, while Mayko Nguyen lends Mary a steely self-possession. I found Nguyen the more compelling performer to watch, as she subtly reveals an underlying vulnerability when Mary is forced to weigh her emotions against the pragmatic desire for a better life for her and her family.

The actors achieve a playful, genuine chemistry that was enough to make me root for their love story, but for a two-hander and a play billed as a romance, I hoped for the kind of connection that makes you physically ache to see the couple part. I never felt that from this adaptation of Salt-Water Moon. The element of restraint is what keeps this aesthetically beautiful and well-acted show from being a home run for me, but Salt-Water Moon does slowly charm, making for a sweetly enjoyable evening of theatre.