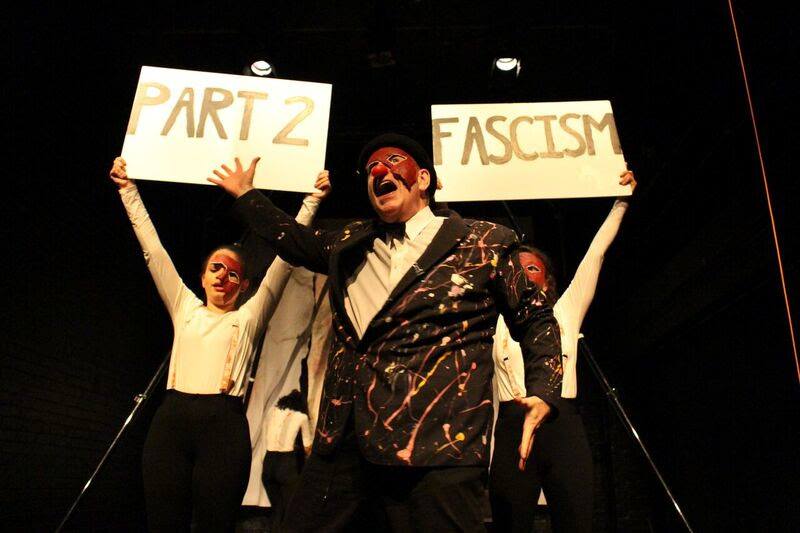 Grab ‘Em By the Pussy

Rouvan Silogix is angry about the state of the world, and very understandably so. And what better way to channel that anger than to create a farce about the contemporary political landscape?

Silogix’s answer to that question is to create a surrealist vaudeville farce, gloriously entitled Grab ‘Em By the Pussy: Or How To Stop Worrying & Love The Bomb. The central question of the show is: who is the monster? Dr. Frankenstein? Or the creature he brings to life? Sure, the creature wreaks havoc and destruction, but how do we parse the responsibility between the two? Or, to put a finer point on it: when we think of cycles of violence and destruction and blame in the current political landscape, how do we understand individual responsibility?

This show crams in quite a lot: gymnasts, acrobats, a violinist, trumpeters, clowns, an opera singer, jugglers, contortionists – the list could go on. The cast is diverse in talent and impressive in their execution. The pre-show is charmingly offensive, featuring Alix Parra on the gong, Ivana Popovic on the violin, and Jerry Schaefer as the ring-master. All three act as MC’s of the show, bantering with each other, shouting lines from Nietzsche’s Thus Spake Zarathustra, and greeting the audience as we walk in. The chemistry within the cast is good, and the energy is consistent throughout.

The talent of the cast was a big part of the reason that I really wanted to like this show more than I did. The production overall is a bit unwieldy. Silogix is combining a few interesting ideas – the absurd performativity of the American political landscape, the reality of violence and oppression on actual citizens, and some deep philosophical ideas – but the combination of concepts feels off balance and uncoordinated. There are some delightful moments- like the hilarious scene in which del Rio plays a character trying to advance his career in corporate terrorism- and some powerful moments, like the final scene depicting cycles of abuse and violence between a couple mourning the loss of their child. But the show runs over two hours, and it does not really earn the amount of attention it demands of its audience. The overall feel is that of a circus, and while there’s a certain amount of chaos to be expected, the piece needs a lot of editing in order to distill its power both politically and aesthetically.