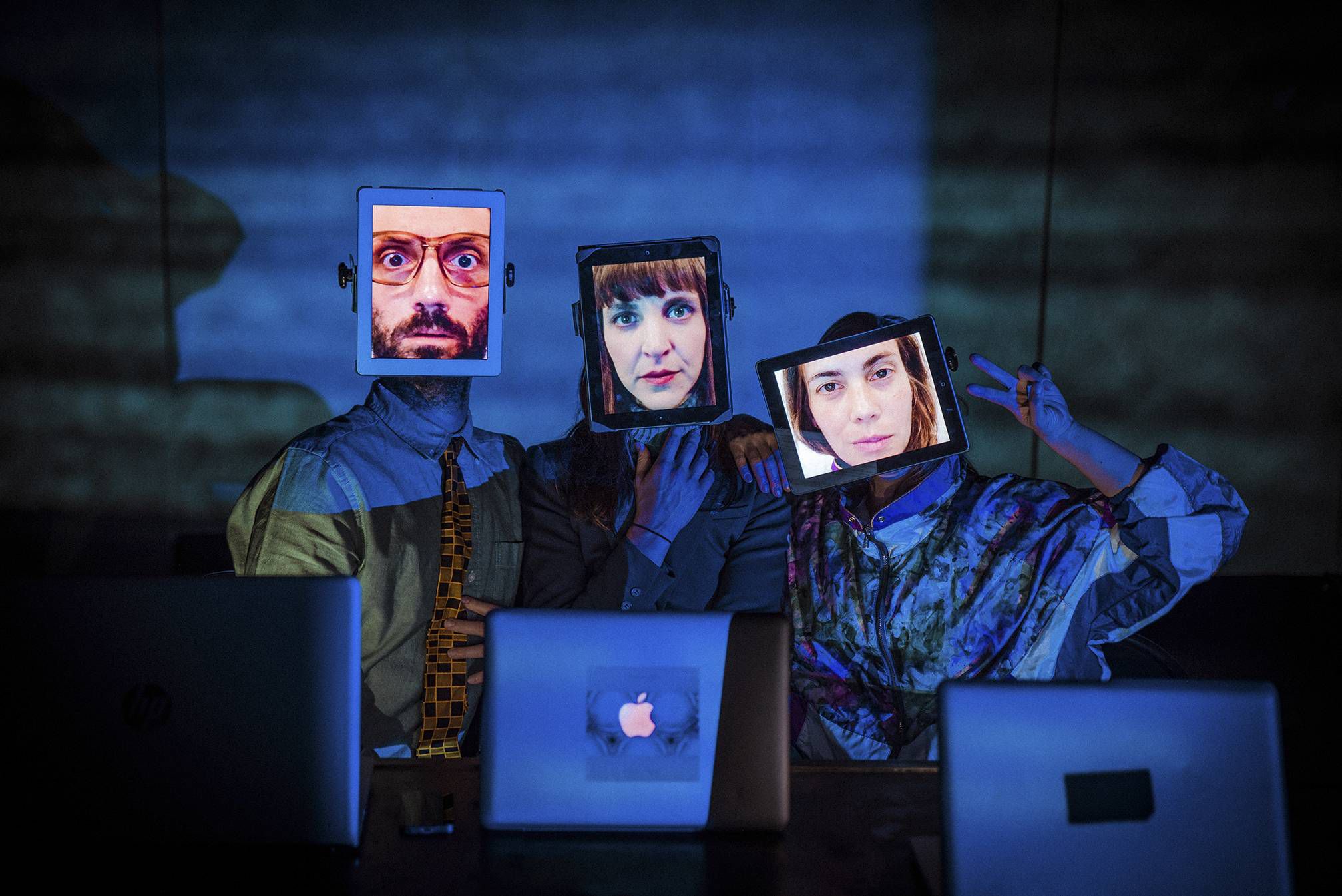 Co-produced by Ahuri Theatre and Bad New Days, Flashing Lights is a story that explores the ways in which technology affects lives, and specifically our relationships. From the internet and the dissemination of information that it enables, to the screens we look at all day long, we are becoming – quite literally – cyborgs.

The production uses many different kinds of technology – the actors speak through microphones, and use both iPads and iPhones. A large translucent screen sits for the entire production between the audience and the performers, and a solid screen sits upstage, both offering projections of the actors at various points, often filmed by the actors themselves. This creates a sense of fragmentation, and sometimes it’s hard to know where to look. There is frequent sound layering, and sometimes the actors get drowned out, even despite the microphones. The technology is complex and well-woven into the storyline, and credit needs to be given to Ken MacKenzie for the set and lighting design, to Matt Smith for the sound design, and Melissa Joakin for the projection design. Technical director Tim Lindsay and stage manager Dylan Tate-Howarth elegantly execute the many, many cues that must be a part of this show.

Adam Paolozza’s direction is very clear, and the acting is excellent across the board. Dan Watson as the maudlin struggling novelist is particularly entertaining to watch as his character gets dragged down the rabbit hole of viral internet culture after a video his daughter (Liz Peterson) takes of him eating his morning cereal. Dubbed ‘Cereal Guy’ by the democracy (tyranny?) that is the internet, he quickly outstrips his wife in terms of fame and reputation, only to crash into infamy hours later, reminding us how certain trends have a life of their own outside of anyone’s control.

Verdecchia’s script is both entertaining and intellectual (there’s a bibliography provided in the programme), easily holding my interest and attention. At the same time, it seems to be sending mixed messages. On the one hand, we get the distinct sense that social media and the constant mediation of screens are throwing up blockades to the experience of interacting with someone in person, face to face. On the other hand, the script also reminds us (with a possible oblique reference to the work of Canadian philosopher Evan Thompson) that human civilization has always had a permeable membrane – that, in the past, animals were also a force that acted on humanity, changing our relationship to the world and to each other. So is it that technology is doing something new? Or that it’s simply the speed that technology evolves that’s the problem? Or is it something else? Is our nostalgia for what is ‘natural’ actually a kind of fantasy?

I found myself frustrated towards the end, because the emotional life of the characters and their final struggles doesn’t really resonate as deeply as it feels it should, given our investment in them. Looking back now that seems somehow thematically appropriate, and, regardless of whether or not it is an intentional effect or an accidental one, the production demonstrates how technology can both amplify and interfere with our personal relationships, but also the relationship between performer and audience. And that is something worth pondering.