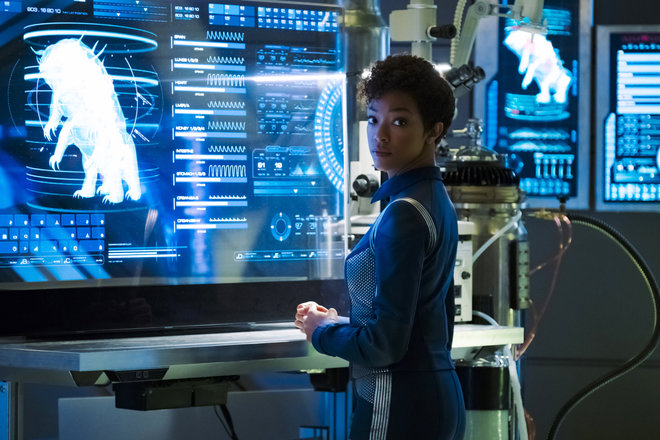 We’re starting to see how the show runs, now that the set-up is done and I’m pleased to see that even though the series has taken on a serialized approach, the episode’s plot still stands on its own, simultaneously feeling both like a Star Trek episode (problem on a planet, need to come up with a solution to reach them in time, science our way through, arrive in time to save the people, consider the consequences and lessons learned) while also building on the overarching plot (Discovery’s role as a black ops ship, the continued story of the creature from the Glenn, the ongoing Klingon power struggle). I’m pleased to see that the show can balance these elements as well as it does here as it gives us the final proof of concept for the new style of show, and for my money, it’s a good one.

This episode also succeeds in examining who Michael Burnham is when she isn’t dealing with her big ‘mutineer’ plot and thankfully she’s the same character we got a glimpse of in the pilot when she was exploring the Torch: a curious, inquisitive, mind that is in awe of space. There are a lot of complaints and concerns about the tone of this new show as being overly militaristic, pessimistic, and ‘grimdark’ (a delightful portmanteau with its origins in the Warhammer 40,000 universe; learn more about it in this handy article at KnowYourMeme.com), however I’d argue that the Michael we’re getting now is actually the embodiment of the sense of discovery and exploration that was always at the core of Trek. Her main support characters, Lt. Stamets and Cadet Tilly, both provide classic Trek outlets, with particular credit to Rapp, whose Stamets mixes the best smarm of Stephen Colbert and Phil Hartman to create a science officer foil that is both capable and annoying (in a good way). While Burnham remains in strife with Saru, the show did a good enough job of getting us on-side with him that we’re content to wait and let him become more central as Burnham increases in rank (something we’ll likely see happen pretty quickly, given Lorca’s obsessions). And speaking of Lorca, my continued hat is off to Trek for allowing what would previously be a mentor or admiral one-off villain be the actual captain of the goddamn ship. We’ve seen the dark reflection of our captains many times before, but to get an actual Ahab is a joy – particularly given Burnham’s care and understanding of the creature in her care.

Which brings me to the big debate point right now: is this Trek too grimdark? I’ve been wondering this myself, ever since the first major conflict with the Klingons involved Michelle Yeoh’s Captain Phillipa Georgiou hiding a bomb on a Klingon casualty of war in order to attack their ship. Tactically, this is something we’ve seen in major conflicts throughout time, but is generally regarded (rightly so) as a despicable, inhumane act. Obviously, in the dire circumstances of war despicable, inhumane acts are sometimes the only options available (as indeed it is presented here), however there is no pause or comment on it from theoretically moral and upstanding characters. Georgiou is regarded as a Picard-level ‘always does the right thing’ character and yet defiles a corpse without thought or hesitation; all we would have needed, I think, was a moment of “We must do a despicable thing to win this” or a “Captain, are you sure that’s a line you want to cross” and see Georgiou decide to do it, cost be damned, to save her crew and we would have been good. Unfortunately, it was presented as an imminently reasonable solution to the problem (as Trek technical solutions often are) and we moved on. Trek, traditionally, is a show of optimism about the future, with Roddenberry’s stated goal being to present us not as we are but how we should strive to be: simple things like having a Russian working happily alongside Americans on the bridge of the Enterprise during the Cold War was a simple statement about what we could do if we stopped fighting each other and started working together. Roddenberry refused to allow war into Trek (aside from the Klingon Cold War, in full swing during The Original Series) and it wasn’t until after his death that we got our first taste of out-and-out war in Deep Space Nine, which took Trek to war against The Dominion. War was further re-visited in Enterprise (which shares a lot of DNA and ideas with Discovery, though Discovery has gone about applying it much better) and then again most recently in the very post-9/11 take on the Federation in J.J. Abram’s Star Trek Into Darkness (which thankfully was course-corrected in Beyond).

But here we have Trek at war, aboard a ‘victory at all costs’ black ops shop, determined to end the war as quickly as possible. The Discovery and its secret projects are a kind of Manhattan Project, with Lorca eagerly eying the war-ending potential of the atom bomb with not a thought to the destruction and death it will cause: this sits ill with many Trek fans, which is understandable, given Roddenberry’s intent and the hopeful nature of the other shows. What I’d like to argue here is this: the goal of this series is to bring moral ambiguous characters forward to the point of being the hopeful adventurers we met in The Original Series, not to languish in that utopian-lite period of optimism. The way the cast and crew spoke about the show at the press conference at the San Diego Comic Con back in July leaned heavily toward hope, tolerance, acceptance, diversity, and understanding how to live with and strive with each other. So far, we’ve only seen glimpses of that, but I’d like to hope that’s the point: we are living in a post-Star Trek society. We’ve seen it, we’ve loved it, we’ve learned from it. Roddenberry built a beautiful lens through which to view our future and we’ve been looking through it for fifty years; but the world around us does not reflect that future (and granted, in his time his world didn’t reflect it either). What I’d posit Discovery is presenting is an experience where we move from not understanding how to achieve this future, to actively working to achieve it, as our characters do. And the show is presenting a much more accepting and diverse picture of humanity in the future: even just having a greater diversity of sexualities aboard a starship is a big step forward for Trek. But where we are failing hard right now as a society is in understanding other points of views and seeking similarities: we’re re-tribalizing and becoming isolationist again as the world continues to shrink due to the internet and ease of communication and travel. And so, I think, Discovery is out to show us that part of the process: how we come to use our empathy, curiosity, and understanding to work together. In a sense, it’s showing its work, rather than just presenting the result. The first real proof of this, comes in this week’s episode with ‘Ripper’ the creature that killed everything on the Glenn during last week’s excellent horror sequence.

Ripper has shown itself to be a creature of great destructive capabilities as well being nearly invulnerable. Naturally, Lorca wants to weaponize it or repurpose its claws and hide for weapons and armour. Tasked with doing so, Burnham is teamed up with security chief Commander Landry (Rekha Sharma, best known as Tory from Battlestar Galactica): where Burnham seeks to understand the creature and why it attacks, Landry just sees it as a weapon and gets killed right-quick for it. But Burnham’s process of understanding is a clever and ultimately useful one: rather than just treat the unknown as a threat, Burnham works to understand. This is a classic Trek set-up and has been used time-and-time again (like that time Spock mind-melded with the angry carpet monster in The Devil in the Dark) but here I think it’s actually being used to illustrate Discovery’s thesis: the creature was introduced as a ‘freak-of-the-week’ monster in the first episode, the key to fungal teleportation and sentient in the second and is left wounded and afraid by the teleportation by episode’s end, with Burnham struggling with the fact that it isn’t a beast, it’s a new alien lifeform that is being abused and disregarded for Starfleet’s immediate gain. It’s a different way to think about first contact and the idea of ‘seeking out new life and new civilizations’ but it’s a good one for a time of fear and war: just because we’re in conflict doesn’t mean we can abandon our beliefs and morals (as the first episode oddly did with the corpse bombs). Burnham seems to be learning this and my great hope is that the rest of the series will follow her spreading that to the rest of the crew, while contending with Lorca’s hellbent mission.

Of course, I could be wrong; TV has shifted hard in favour of the anti-hero over the years, with show runners struggling to make audiences hate their villainous main characters (Vince Gilligan was astounded people were still rooting for Walter White to win and get a happy ending going into the final season of Breaking Bad). We’ve seen what is morally acceptable for our main character to do in the name of the cause shift dramatically (thanks, Jack Bauer) and with the state of the United States right now, it’s damn hard to view the future with optimism and if I’m wrong and this truly is a grimdark Trek, it may not be the one we want, but the one we deserve right now.

At Comic Con, during SyFy’s excellent “The Great Debate” panel, moderator John Hodgman posed the question: if you had to erase either Star Wars or Star Trek from history, which would it be? The entire panel voted Wars, not out of hatred of the franchise, but because of the hopeful nature of Trek. Mythbusters’ Adam Savage disagreed: with palpable sadness in his voice, he replied that though he loves Trek with all his heart, the future it promised is too easy and a lie. He said for our current world, we needed the grit and tragedy of Wars, where common people struggle against tyrants. The mood in the room shifted for a brief moment as we all sat with the ramifications of what he’d said. Then someone made a joke and we were back to it. But Discovery reflects Savage’s point: it is giving us a dirtier, more morally ambiguous Trek to fit the times, but if it can bring us from despair to hope, it will have created one of the most interesting arcs ever in the history of Trek.

It’s still too early to tell and likely will be until the series ends, but either way, I’m with them now to the end: and regardless of whether or not Discovery can pull off the gargantuan task I’ve hypothesized for it, the show is engaging, interesting science fiction.

In that regard, it doesn’t really matter whether Discovery is good or bad Trek: it’s good TV. Ultimately, that’s probably what matters most.