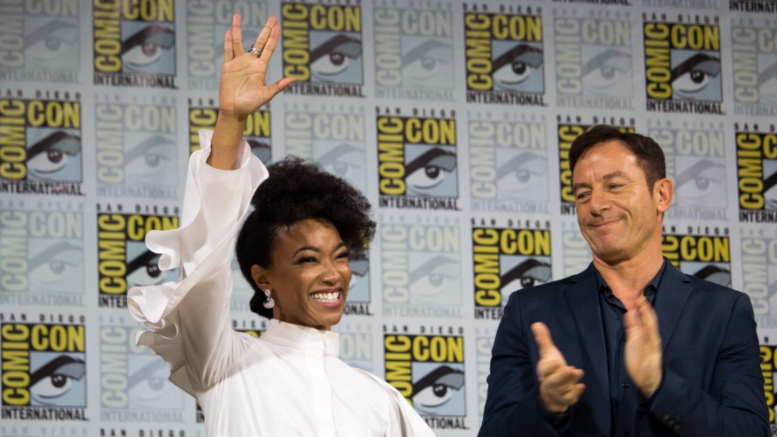 There has been a lot of cause for concern surrounding Star Trek: Discovery, the new CBS Trek show that will be airing on their streaming service in September: first and foremost, Bryan Fuller, the visionary mind behind Hannibal, American Gods, and my dearly departed Pushing Daisies was the passionate advocate for the show and its mission, giving hope to many Trekkies, Trekkers, and lovers of visually beautiful stories well told that this new Trek would avoid the sins of the past (namely, 2001’s disasterous first couple seasons of Star Trek: Enterprise on UPN). However, it wasn’t long before Fuller stepped down entirely to focus on American Gods, which was greatly concerning as he had been presented as the guiding hand behind the show. Then came the delays. Endless delays. While this isn’t necessarily a bad thing, the two running hand-in-hand was greatly concerning. There were other issues afoot as well, stories of beloved franchise mainstays being offered a pittance to appear on the show; actors recast mid-process, and a complete and total lack of information, images, or anything that would suggest the show was progressing.

Until now. With its first trailer only a month old and a new one having been released at the SDCC Panel and having now seen both the costume/prop exhibit and witnessed the cast in action at the press conference, I can safely say it: we’re in for something special.

Enterprise was a valliant attempt by the powers-that-be to make Star Trek more palatable for a general audience. The result was a prequel series, starring Quantum Leap and Looking’s Scott Bakula (who carried the show handily), as a frontier captain in the early days of the Federation. The aesthetic was much closer to Firefly, grittier, more basic and less ‘sci fi’ than it’s predecessors. The opening theme song was a country song, a far cry from the sweeping orchestrals of Treks past. And casting choices were made to make the show ‘sexier,’ most notably, model Jolene Blalock as Vulcan officer T’Pol, which led to the notoriously bad ‘shower scenes’ of the pilot (wherein and another crew member slather each other in ‘disinfectant goo’ while wearing suspiciously thin shirts).

While none of these issues in-and-of themselves would be enough to sink the show, the combination along with the producers, themselves longtime Trek staff, insisting that this was Trek ‘their way’, and the noticeable lack of chemistry amongst the cast (Bakula expands on this, heartbreakingly, in the excellent documentary The Captains), caused Enterprise to misfire for fans and new viewers alike. Though it eventually got on track, ending strong in its final two seasons, the damage was done: between the show’s cool reception and the critically panned Star Trek: Nemesis film, Trek looked dead in the water.

But then J.J. Abrams came along and lens-flares-and-all saved Star Trek.