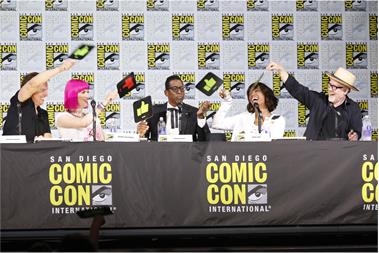 First, a confession: I didn’t have much interest in this panel. One of the best/worst things about Comic Con is that unlike Toronto’s Fan Expo, they don’t clear the hall after each panel. This is a clever bit of crowd control, as it keeps lines managed and panels on time…but at the cost of fans not being able to attend the panel they’d like because people are camping in the room for a later panel (Hall H, most infamous of all Comic Con halls and the location where all the major studio reveals occur). So, wanting to ensure my spot for the Battlestar Galactica Reunion panel, I slipped into SyFy’s Great Debate, thinking it might be some light fun, but more importantly was my guarantee of a seat for Galactica nostalgia. What I found instead was one of the most relaxed, surprising, and delightful events at Comic Con.

The premise is simple: John Hodgman (former Daily Show correspondent perhaps most famous from his “And I’m a PC” ads) poses classic questions to a panel of nerd celebrities consisting of John Barrowman (Captain Jack Harkness from Doctor Who and Torchwood), Charlie Jane Anders (co-founder of nerd site io9.com and author of the 2016 Hugo Award winning novel All The Birds In The Sky), Orlando Jones (Mr. Anansi of American Gods and MADtv alum), Aisha Tyler (comedian and Lana from Archer), and Adam Savage (of Mythbusters fame) they defended various positions, and the audience – by way of thumbs up, thumbs down placards (think fancy auctions in movies. Or real life, if you’re a fancy auction kinda cat) – votes on who won. Ultimately, it’s an elevated version of that old childhood staple of arguing who could kick who’s ass, Superman or Batman, Wolverine or Hulk, Kirk or Picard (pro tip: Picard) but on a grand scale: held in the 4,000 seat Ballroom 20, there’s great freedom in thrusting your placard into the air. As an oft-too-agreeable Canadian, I don’t often state my opinion in any hard way, but here I merrily voted against the guy sitting next to me and swapped jokes in the same breath. The content was, of course, absurd, but in this time of hard political division, it was a relief to be able to state an opinion freely (as a Canadian in the US right now, I’m particularly aware that there are issues at work that a foreign opinion really won’t help and it was more freeing than I’d thought). It also occasionally dipped into deeper territory, particularly when the panel was posed the question of having to erase either Star Trek or Star Wars. Despite the general agreement that Star Trek would be saved (not sure I want to live in a world where either is erased, myself), Adam Savage argued that while he prefers Trek, he felt it lulled us into a false sense of security with its utopian view of the future and that the darker, more chaotic nature of the Wars universe better suited our times.

The question of whether mind control was ever morally justifiable also led me to pause, as my cut-and-dried expectation of the vote was shattered by the half of the audience (including my aforementioned seatmate) voted yay on mind control. Again, all hypothetical, but still… (Extra kudos to Aisha Tyler’s on-point comedy as always, immediately responding to Hodgman’s question with the timely response: “Well, I think R. Kelly would say it is…”)

The question of remakes was discussed (“Would you remake Firefly if you had complete creative control, but no permission or blessing from the original creators?”) and showed that even nerd celebrities are still just nerds as both Adam Savage and Orlando Jones voted yay, largely so they could just spend more time with those characters (Barrowman would do it on the condition that Captain Jack and Captain Mal get down).

My personal favourite was a debate which forced the panel to defend the various cinematic portrayers of Batman: Michael Keaton, Val Kilmer, George Clooney, Christian Bale, and Ben Affleck. Keaton was the early favourite, being described by Orlando Jones as the most ‘complete man’: “He laugh, he cry, he kills some bad guys!”; Tyler defended Affleck largely on the strength of his Bruce Wayne, who she described (rightly so) as broken and interesting (though the panel largely agreed he was just playing himself). She also took issue with Bale “throwing bats at people” and, of course, the voice. The panel rebelled, at this point, with Anders voting for Kevin Conroy (voice of Batman in Batman The Animated Series), whose “voice can kick ass,” and Barrowman demanding to vote for Adam West (though admitting that as long as it was Batman he’d happily be any of their Robins. He says stuff like this a lot.) Savage was forced to defend Kilmer, to which he simply stated “George Clooney” (which honestly is a damn good defence of Kilmer), and Hodgman was forced to concede that his punchline was going to be declaring Adam West the obvious winner, but the panel had beat him to it.

The final act of the debate centred around the classic ‘who would win in a fight’ scenario, leading to some fun arguments about Batman fighting King Kong (it was generally agreed he would build a giant Batrobot), to Predator and Wonder Woman getting into an invisible fight (Predator with his stealth cloaking, Wonder Woman in her invisible jet –that’s right, movie fans, she has an invisible jet – that amounts to a static shot of the jungle as they fight invisibly), to some confusion about the difference between T-100 and T-1000 from Terminator, which predictably turned the crowd against the panel (NERD RAGE!)

All-in-all, a fun, light exploration of fandom that asked a very simple and accidentally profound thing of its audience: participate, state your opinion, but do it in the name of fun. Nerd debates often turn into nerd arguments and those are exhausting and unproductive (as most arguments are); it was nice that for an hour in a politically divided nation, a bunch of people stated their opinions civilly. Now if only we could apply how we vote on Batman vs King Kong to national politics, maybe things would be a bit better all around.