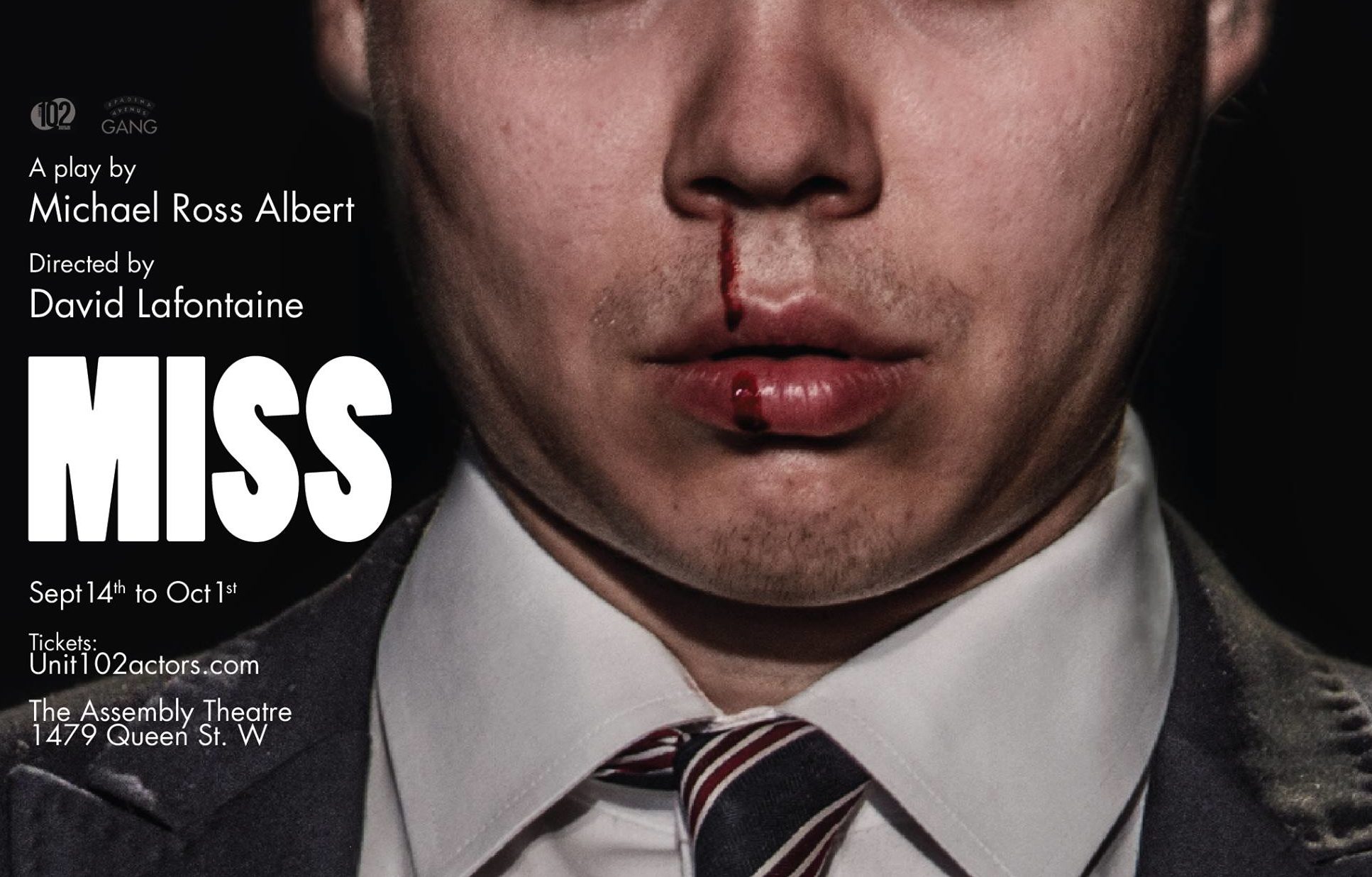 Miss at The Assembly

I rewrote the title of this article about four times. I worry that the one I settled on is misleading- it sounds like an old timey newspaper headline declaring that the new production from Unit 102 Actor’s Company misses the mark- but everything else I came up with was a pun or just generally stupid wordplay contrasting the clever multi-meaning title of Michael Ross Albert’s script with the word “hit”, because that’s what the production promises to be.

In any case, the first thing you need to know is that Unit 102 is finally back after a year-long hiatus while they searched for a new home (their old place on Dufferin was bought by a developer). It was a long year in the absence of the only company in town by whom I’ve literally never seen a bad production, but they’re back now and partnering with Leroy Street Theatre at a new space in Parkdale aptly named The Assembly Theatre. The current venue has a much-needed additional washroom (so the performers don’t have to share with the audience) and a bigger lobby area for pre-show milling. The proscenium setup of the actual performance space doesn’t give resident or renting directors and designers a ton of freedom (and sightlines from the back corners will never not be a problem) but it’s a nice spot, a decided step up from the grungy nooks indie theatre is usually crammed into. With the right programming (and a little luck with good renters), The Assembly has the potential to quickly become the indie 2.0 space Toronto’s been missing.

Certainly they’re off on the right foot with Unit 102’s first-ever new play (it’s traditionally been a modern American classics kind of company, a sensibility that’s definitely still alive in this production). Barely over an hour in length, Miss is an intense real-time drama that takes place at an all-boys boarding school in the aftermath of a brutal fight that left a student partially blinded. The big twist is predictable, even somewhat derivative considering the trope’s ubiquitousness within this hyper-specific genre, but Albert’s script is dense and enveloping, rendering the technicalities of his plot ultimately unimportant in the shadow of how deeply and quickly the audience cares about the characters on stage. David Lafontaine has an exceptional eye for casting and his restraint as a director reveals a level of artistic maturity uncommon in the indie world. His work here is excellently paced and smartly subtle, allowing Albert’s script to really shine and bringing out wonderfully present performances from all three actors- Nola Martin, Trevor Hayes, and Wayne Burns. Scene stealers Hayes and Burns are a study in sublimely complex contrast, trading off the upper hand in a simmering power struggle bridging gaps of age, intellect, income and a thousand unspoken things. Martin plays the reluctant referee in the production’s most complicated role, layering mountains of hurt and confusion underneath desperate determination to hold shit together. Few three-handers strike such a compelling balance in the fight for the audience’s pathos.

The entire design team are reigning MyTheatre Award winners for past Unit 102 productions- Adam Belanger (set), Lindsay Dagger Junkin (costumes), Steve Vargo (lighting)- and they deliver again in a piece where the only weakpoints come from messy fight direction and a climax hard to see from the cheap seats (meaning the back two rows have a partially obstructed view; every seat in the general admission house is $25 because indie theatre is The Best). Belanger, in particular, does incredible work transforming The Assembly’s small stage into a hyper-realistic private school classroom complete with wood panelling, portraits of past headmasters, and a window with real working rain. He truly is peerless among independent designers and it’s the consistent on-sight wow factor of his elaborate builds that gives Unit 102 its edge over shops of a similar size.

And they really do have an edge. If there’s anything to it other than a talented core team with good taste that attracts other talent, I couldn’t say. But they have an 8-0 record since 2015 so, at a certain point, you just can’t call that luck. Unit 102 is the best in town and the Toronto theatrical landscape wasn’t the same without them. They’re back now and, if Miss is any indication, they haven’t lost a step and they’re ready to work.