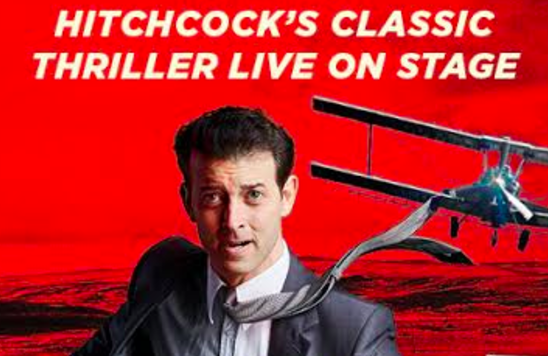 Heading into this show, I wasn’t convinced I would like it. I haven’t, I will admit, watched many Alfred Hitchcock films, and the play seemed a bit like it might be like an old James Bond film, but an old and vaguely forgotten Roger Moore one. The crowd around me seemed like the kind of demographic that watches Mad Men and instead of, like me, wanting Don Draper to die in a fire, feels nostalgic for the ‘good old days’. I did not have high expectations.

What followed was a surprisingly sophisticated and nuanced big-budget production like I haven’t seen in Toronto in ages. This play has been adapted by Carolyn Burns from the 1959 Alfred Hitchcock film of the same name, originally starring Cary Grant and Eva Marie Saint. The Mirvish site exclaims that “years before the James Bond films there was North By Northwest – a lightning-paced thriller that mixes glamour with espionage for a truly irresistible cocktail.”

In fact it’s less like a James Bond thriller, and much more like Atomic Blonde meets The Big Lebowski. Jonathan Watton is extremely Cary Grant-esque as Roger O. Thornhill, the protagonist who finds himself falling down a rabbit hole of gang-related activity and cover ups. He’s the protagonist, but instead of driving the story it’s the story that is driving him. He’s framed for murder, then hunted by the police, only narrowly escaping each time. The play traverses such terrain as Manhattan, Chicago, and even Mount Rushmore, South Dakota.

Simon Phillips’ direction is superb. Each scene is well-mined for moments, where the meaning of the action isn’t just on the line but in the moments between the lines, the reactions from the other characters. The action is well paced and well punctuated, while the scenes flow easily into each other. This is partly a function of the versatile set design of Simon Phillips and Nick Schlieper, comprised of levels and layers that often serve not just as different things (hotel partitions, train compartments) but reference each other by doing so, as if to demonstrate over and over again that appearances can transform and transition in both logical and unexpected ways. Thornhill himself is an advertising executive and trades in appearances, and while the show is obviously premised on the deceptive nature of how things look, the production goes further and ties those themes together both via the set and the visual effects.

Let’s talk for a minute about how impressed I was with the visual effects. They are designed to be practical, on theme, and entertaining, and they all manage to find the balance perfectly. Tables and chairs are assembled by a chorus of cast members as Eve and Roger make their way up Mount Rushmore, reinforcing the awkwardness of the climb while also making fun of the theatrical attempt to depict such a complex and daunting scene. My favourite effects, however, were booths on each side of the stage that contain cameras and projectors, and often what is in front of the camera gets projected onto the main stage screen as a background: everything from using tiny furniture figurines to mimic an auction, to a chorus of actors placing their faces in just the right way to evoke the sculptured faces of Mount Rushmore, to using a tiny doll to evoke a man falling to his death. This is perhaps a nod to the original film from which the story is adapted, but Phillips is also exploiting film for its ability to provide us with perspectives that theatre cannot. The audience laughed heartily at these choices, because they are cheesy but in an ironic way, but they are more than just cute: they add a kind of self-awareness within the production that begins to seem like it’s not just evoking a style but commenting on it at the same time.

And given the very themes of how appearances both occlude and inform reality, these choices are exactly on point. It’s interesting to me when an adaptation manages to get at the essence of something better than the original does. The 2002 film The Hours is a great example of this, largely because the visual tie-ins between the three narrative threads allow the themes of the movie to be both foregrounded but also more nuanced than the book. Similarly, while it’s clear that Hitchcock’s original film has a tongue-in-cheek style, it seems to me that this production manages to explore that even more effectively.