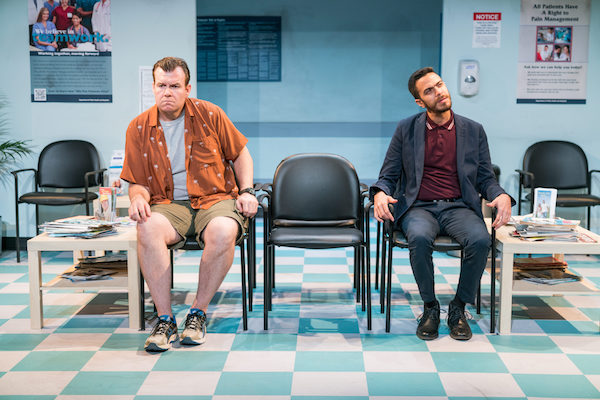 Revelations In a Little Room

Hospital waiting rooms are emotional places. On a daily basis, they are the scenes of both great grief and great joy as humans celebrate new life and renewed chances at life while others lament painful losses. In a Little Room, written by Pete McElligott and directed by Patrick Vassel, now playing at the Wild Project, centers on the shared experience of two men who meet in a hospital waiting room and, together, wade through some uncomfortable truths, realizations and emotional baggage in the aftermath of death. While McElligott’s In a Little Room injects some enjoyable farce and humor into the grim topic of death and involves an engaging juxtaposition between different struggles with heart-wrenching loss, the themes that McElligott explores are occasionally hindered by the eccentricities of his characters.

At the outset of the play, the dull florescent lights rise on the underwhelming sterility of a hospital waiting room. Posters warn agains cell phone use, ensuring an awkward silence permeates the space. Mounds of reading materials are heaped upon side tables, yet there is nothing worth reading in sight. An embarrassing incident involving lukewarm coffee eventually sparks conversation between two men, Charlie and Manning, whose purpose at the hospital is not immediately clear. They soon find themselves exchanging tales, personal philosophies and lighthearted banter as they wrestle with the profound grief that follows the death of a loved one, all while the hospital may be burning down around them.

At its core, In a Little Room explores how different people experience and rationalize loss. While Charlie and Manning must deal with the untimely death of an immediate family member, their grief is difficult to categorize and their emotional responses are vastly different. Moreover, In a Little Room highlights the uncomfortable truth that not everyone, even those with a jovial or composed appearance, successfully works through their grief. Additionally, the playwright examines both the futility of life and the interplay of fate and choice in existence. If a person’s life is best defined by their reactions to life (i.e., what happens to them), a point of great discussion at the climax of the play, the existence of fate versus free choice is the foundation upon which our lives are built.

While wrestling with these concepts proves engaging, McElligott’s writing works against itself with the introduction of certain character traits and sequences that distract from the core explorations of the piece. Manning’s almost cheerful demeanor at the outset of the play and his flippant, doe-eyed nativity about the world clash starkly with his admission that he is dealing with the pain of losing his young child. While the character is funny and entertaining, he does not always come across as authentic. Also, late in the narrative, McElligott introduces a detached, slightly sinister man named Keagan whose appearance brings an air of comedy to the dark tone of the plot, but the value of this quasi-philosopher, maybe-arsonist to the piece never becomes fully apparent. Perhaps he represents chaos. Perhaps he represents fate. Perhaps he represents the notion that there is some choice that dictates where our lives will lead. Given his dialogue and actions, he could very well be any of the above or none at all. While this mystery may be worth pondering, Keagan’s bizarre behavior and oddball monologue (a dick joke) are the most memorable parts of the character’s appearance, but not necessarily the most valuable with respect to plot and purpose.

To the play’s benefit, director Patrick Vassel’s staging feels organic and not overly deliberate, which grounds it in a sense of realism. As off off-Broadway venues go, the Wild Project is one of the best spaces for traditional stagings and Zachary Zirlin’s set design effectively transforms the space into an exasperatingly muted hospital waiting room. Illuminating the set is Katy Atwell’s lighting design, which successfully develops and alters the atmosphere to aid the plot. Jeb Kreager as Manning and Luis-Daniel Morales as Charlie develop an engaging repartee. Kreager’s disarmingly comedic and lovable oaf, Manning, balances quite well with Morales’ guarded and emotional portrayal of Charlie. Both performances are nuanced and each actor successfully conveys the anger, vulnerability and despair plaguing their characters without turning Manning and Charlie into caricatures of grieving men. David Triacca completes the ensemble, portraying several secondary characters – his most notable being the mysterious Keagan who is a bit singed from the fire and barely lucid. Aside from his portrayal of a doctor, which reminded me of a slightly perturbed Mr. Feeny in Boy Meets World, Triacca is an appreciable comedic presence and his portrayal of Keagan is both uncomfortable and oddly alluring.

Despite its failings of narrative, there are compelling explorations built into In a Little Room regarding the value of life, the impact of death and the question of whether fate or self-determination shape our lives. McElligott’s work examines grief and loss, and the effect that death can have on one’s moral and philosophical outlooks on life and human interaction, acknowledging the difficult truth that, for some, a significant loss can impede one’s ability to continue living in a meaningful way. Although the subject matter can be depressing and the dialogue overly wordy, In a Little Room is laced with enough levity to counteract the darker tones of the plot and the actors embrace the dark comedy, resulting in an overall enjoyable and introspective theatre experience.