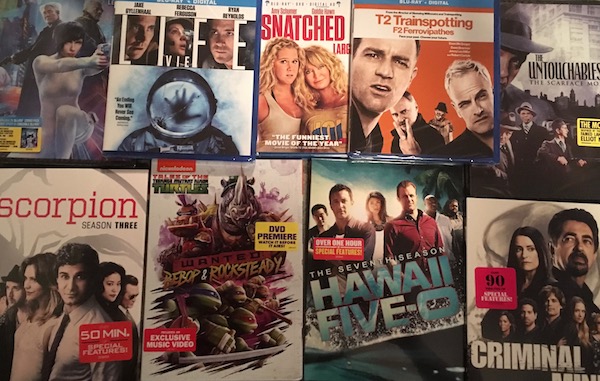 Criminal Minds (The Twelfth Season)
Season twelve was something of a watershed year for the stalwart FBI drama. It was the first season without fan favourite heartthrob Shemar Moore (he guests in the season finale but that’s it) and the last appearance of series star Thomas Gibson who was fired for an on-set altercation and written out suddenly after 11 seasons and two episodes. Total delights Aisha Tyler and Adam Rodriguez became series regulars and Paget Brewster returned for a guest arc that led to a full come back for next season. There’s also a Jane Lynch arc and Aubrey Plaza plays a hitwoman so I don’t know what else you could want from a CBS procedural.

Scorpion (Season Three)
It was a big season for the one CBS procedural I’m actually kind of into- Happy and Toby plan a wedding, Walter and Paige finally get together, and Sly grows a beard (because the gang is trapped on a desert island, obviously). It’s all terribly silly but it’s not not fun.

Tales of the Teenage Mutant Ninja Turtles (“Wanted: Bebop & Rocksteady”)
Do it. Kids need more Turtles and more things should include the word “bebop”.

The Untouchables: “The Scarface Mob”
In 1959, a two-part pilot was produced for a new TV series based on the real-life story of Eliot Ness and his “Untouchables” squad tasked with catching Al Capone. CBS aired the pilot episodes then passed on the actual series (it eventually ended up at ABC where it lasted four seasons). Now, Paramount (who owns CBS) has repackaged that original pilot with its self-contained story about the hunt for Capone and is releasing it as a feature film more than worth two hours of your time.

T2 Trainspotting
If you loved the original Trainspotting back in the 90s, you can’t not make a return appointment to spend time with the classic characters who are reunited in this long-awaited (and confusingly titled) sequel.

Life
It’s kind of crazy that a sci-fi movie starring Ryan Reynolds and Jake Gyllenhaal made as small of a splash as this one did, especially when  you realize it was written by the Deadpool guys. This derivative but decently well made flop will surely be lost to time… unless you buy the DVD that is!

Ghosts in the Shell
It’s a fine action movie I guess but best not support this whitewashed bit of controversial and unnecessary nonsense.

Snatched
The one title from 20th Century FOX on this list, this wacky mother/daughter movie is totally skippable. Amy Schumer and Goldie Hawn are well paired and I’ll watch Wanda Sykes in anything, but there’s no re-watch value here. Get New Adventures of Old Christine instead.