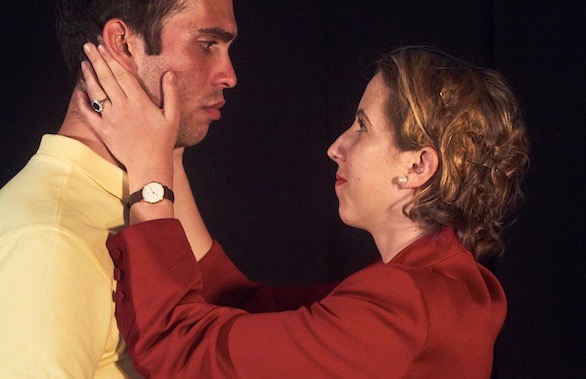 The Diana Tapes is about the disclosure of Princess Diana’s recorded confessions of her personal experience as a member of the HRH to journalist Andrew Morton. Morton’s book, “Diana: Her True Story – In Her Own Words,” which came out in 1992 and caused a rift between Diana and the Royals, has just had its 25th anniversary since publication, and is the motivation for the writing and development of this play.

In the play we see Diana discussing her intimate life details with her friend James Colthurst, fraught conversations between Colthurst and Morton as he wrestles with his conflicting feelings about what these tapes will manage to accomplish, and conversations between Michael O’Mara, a newspaper editor, and Morton as they plot to write and release a book that would be coveted by millions worldwide.

People under 35 or so might not really remember why this mattered so much, why Diana was so popular and interesting. Now that we live in the age of social media, it’s easy to forget, but twenty or thirty years ago, celebrity was something quite different. As, for that matter, was royalty. Diana embodied the union of the two, and as a result redefined both what royalty is and what celebrity is, and how the two have in many ways become interchangeable (a shift beautifully retraced by the 2006 film The Queen starring Helen Mirren).

The play was written by James Clements, who also stars as journalist Andrew Morton. Often this is something I side-eye in theatre, but he is probably the strongest of the cast. As it happens, also in honour of it being the 25th anniversary of the release of Morton’s book, there is a documentary on Netflix narrating the development of Diana’s story, in which both Morton and Colthurst appear. Clements manages to evoke Morton’s enthusiastic zeal remarkably well. The acting is strong across the board, with Sam Hood Adrain as an aggressive and greedy O’Mara providing a nice counterpoint to Morton. Jorge Morales Picó as Colthurst could hit a few more notes, but does a good job conveying his anxiety about the content of his friend’s confessions as well as his conflicted feelings about handing the tapes over. Ana Christina Schuler does an admirable job playing Diana’s alternating coy flirtatiousness and assertiveness, while also bearing a remarkable resemblance to her.

The main issue I have with this production are the accents. Clements’ Leeds accent is mostly consistent, though it definitely wanders into Scottish several times at the beginning. Picó is doing Colthurst’s very posh accent well some of the time, though it consistently wanders over into what sounds like South African. Adrain does a good American accent, and Shuler does a pretty consistent job of Diana’s aristocratic accent. To be fair, dodgy accents are definitely not a problem that is unique to this production, it’s really a broader issue in North American theatre. I think part of it is in the difference in focus between American and British theatre schools, and a lack of exposure to British culture and accents (they see way more of us than vice versa), but I also wonder if it’s that we just don’t hold each other to a particularly high standard when doing accents and so there’s a norm in which doing something enough to get the gist of the region is somehow enough. And the problem with that is that it assumes that good acting is somehow separate from doing accurate accents. But the thing is, how someone speaks – especially, especially in the UK – is a function of and in return informs the rest of how they are in their body. A cockney person holds themselves differently from a posh person. And one thing I’ve noticed is, for example, when a North American actor is doing a posh accent, what they are actually doing is their idea of what a posh accent sounds like, which is, understandably, very sharp and clear and proper. But to overemphasize that aspect of the accent ends up informing how they hold themselves, which often ends up being just a bit too stiff and rigid. This, for example, was something I noticed in both Picó and to a lesser extent Shuler. A lot of what I imagine to be the warmth of the friendship gets lost in his stiffness, and a lot of her coquetry gets a bit lost in the crisp way Shuler delivers her lines. Diana was an aristocrat, but she spoke incredibly softly, and although she had excellent posture, she would have been raised that way and thus would have read more relaxed.

All this aside, however, the story is an interesting one, and brings out questions surrounding the very performative side of Diana’s character, if she was being manipulative or trying honestly to control her narrative, and if she herself was able to distinguish those things by that point in her life. In light of the development of social media, and the way we no longer even need journalists or photographers to share intimate details of someone’s life with the public, since we can do it ourselves, the production seems timely and relevant. How much of our reality informs the choices we make to represent ourselves? How much does the narrative we craft in turn inform who we understand ourselves to be? And, will there be a point where we cannot tell the difference?