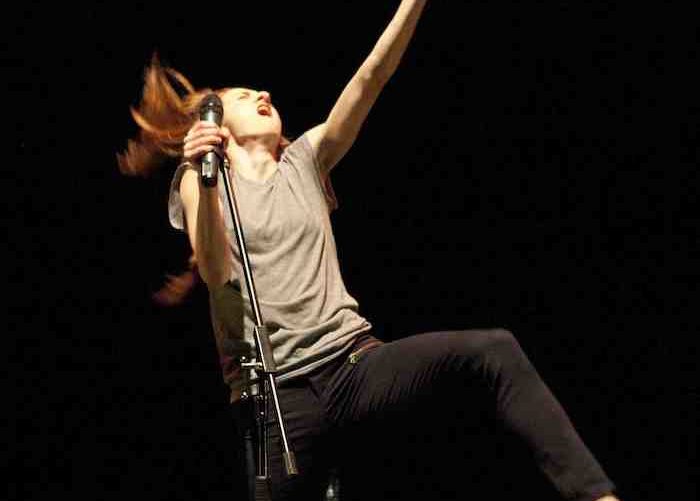 The 2017 Dance: made in / fait au Canada Festival was a four day biennial repertory celebration of Canadian dance, presenting a cross-section of contemporary dance makers from across the country. This year’s event featured three curated main stage series of three works each, an art installation series that included digital and virtual reality projects, along with a free dance for film festival presented in conjunction with the mainstage works. The festival delivered an extensive lineup of Canadian dance works that highlighted experimentation and interdisciplinary collaboration.

The Morrison Series (one of three)

Inspired by a community ethos, each of the three performances in this series speaks to an aspect of living in a connected way with others. Crepuscule, choreographed by Marie-Josée Chartier, features a large ensemble cast of eighteen who move through the stage space hypnotically as one. The strong lines and avian nature of the choreography beautifully embodied both the accompaniment and the inspiration for the piece, ‘In High Branches’ for string quartet, written by Canadian composer Linda Catlin Smith. Messages to an Audience by Naomi Brand was an aptly named solo work that had Brand playfully engaging the audience through site gags and flirtation. In the most basic sense, asking, “are you with me?” Brand utilized simple media such as a mirror and a pile of sand to invite the audience into a two way conversation with her. Hanna Kiel’s Welcome to Our home – Tangled was a high energy, base pounding, hard hitting moment of choreographed exhilaration. Ultimately a dark and tense piece on the theme of familial relations and the strength of the family bond, Tangled featured strong dancers and tightly wound choreography to explore the dynamics of strife, isolation, and explosive connection.

Five short films playing with apocalyptic themes of man vs nature in both urban and rural settings. Public space is romanticised as idyllic, while private pastures provide a symbolic setting for occult ritual. The distinction between human and animalistic breaks down, and glitter becomes stardust because aren’t we all connected anyway? This series builds off of imagery highlighting isolation and desperation, and concludes with a reminder or our own human mortality.

Fragmented ambient sound, and perspective/framed:fixed in space perspectives are utilized effectively in this series’ seven films. Space/place are informed by memory, while bodies exist in a liminal space/time. Many of the pieces use memory or repertoire to index or archive embodied memories. A mix of larger social events and personal redemption stories, the series begins with a single fragmented body suspended in time/space and ends with a community connecting through a shared embodied experience of moving forward together.

Exquisite Consequence by Luke Garwood is an interactive digital dance project merging dance and code together. While the goal of the project was to build content and choreography in collaboration with other festival goers, the day we were there to try it out we were unsure if our interaction with the technology was working or not. Regardless, the premise is forward thinking and excitingly interdisciplinary.

You&Us by Cara Spooner, is a 360° community dance piece filmed in Virtual Reality, and is one of the most innovative dance experiences I have ever had. The piece was viewed through a wearable VR unit that put the viewer in the middle of a crowd of people in an outdoor space, your movements happening in concert with theirs, while your bodily movements in the gallery space creating a personal response to the previously filmed dance piece.

While I was unable to take in the entirety of what the Festival had on offer, the mix of what I did experience, a mainstage series, two of the film series and some of the installations, left me excited for this moment in Canadian dance. The festival has a mandate to feature the works of artists based on artistic merit and regardless of their level of experience or background, the result was an inspiring and eclectic collection of dance that provides a snapshot of our present sociocultural ethos.