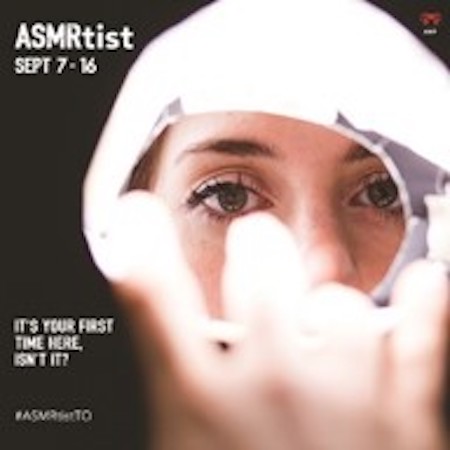 Sarah Marchand and Matt Jones have collaborated to write and create a theatre ASMR experience: the show incorporates elements of ASMR (in both performance and social media) while telling the story of a young woman battling insomnia and anxiety. If you haven’t heard of it, ASMR stands for Autonomous Sensory Meridian Response. It’s the soothing feeling of tingles on your body, induced by relaxing stimuli such as soft speech and certain sounds. If you type ‘ASMR’ into the search box on YouTube, you’ll quickly get a sense of what this means, practically speaking.

By far the best thing about this production is the cast. Sarah Marchand, Amanda Cordner and En Lai Mah had great chemistry and energy as a trio, keeping up the pace and maintaining my attention the entire time. Cordner as Tingle Bell and Mah as Trigger Bell play well off each other as opposing forces and antagonists.

The plot, however, was often confusing and hard to follow. The basic story is about Bell Angele, and her battles with insomnia and anxiety. She tries to use ASMR YouTube in order to fall asleep, but often can’t quite drift off into ‘ASMR land’. Instead, she has various almost-dreams and at points gets out of bed to bake while chatting to the audience. It’s unclear if her interactions with the fairies are part of the dreams inspired by the YouTube videos she watches, or if these characters represent something deeper. There are other times when she’s very child-like, and it’s hard to tell if she’s having flashbacks, and if so if they are meant to imply something sinister (that’s the vibe I get from them, but it never leads anywhere specific).

It seems like Trigger Bell was a combination of a few ideas, from self-doubt to self-defeating thoughts that creep in to our minds at inopportune moments, to the everyday realities of physical and social inconvenience that we all have to grapple with. I also got the sense that the production was trying to juxtapose the sinister with the relaxing effects of ASMR, to disrupt it but also, surprisingly, to make the effects more powerful. This only sort of worked. My confusion about the plot, as well as the public environment, prevented the ASMR effects from really taking hold, and so the contrast isn’t as effective as maybe it could be. I’m also not sure what flavour of sinister Trigger Bell is supposed to be, because there were a few times when he seems to be less a doubtful figure as one who eggs Bell on to different activities and events (and, therefore, away from calming and relaxing environments).

Overall my main issue with this production is that it doesn’t know what it wants to be. Is this an ASMR journey for the audience? Not really. Is it the story of a woman struggling with self-doubt? Sort of. Is she struggling with social demands and anxiety? Yeah, I guess? This show needs to figure out ways to sign post the direction of the story and focus the experience more for the audience.