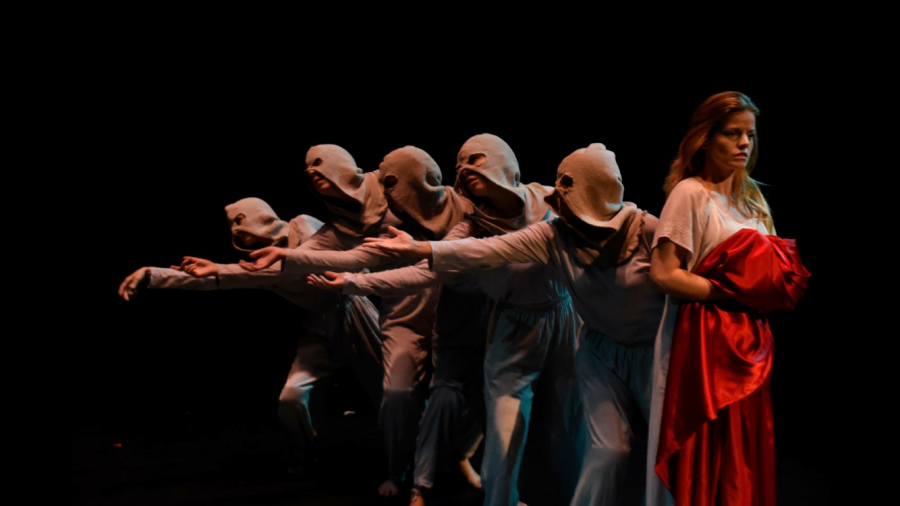 Queen Margaret at Theatre for the New City

It is the story of the daughter of a deposed king with an eye on the throne and a determination to return to glory. A blonde-haired outsider from across the sea, managing duplicitous politics, shifting allegiances, and an army of soldiers to defend and maintain her claim to power against warring factions with claims of their own. And no, it’s not what you’re thinking; this is not the story of Daenerys Targaryen. It is The Life & Death of Queen Margaret, a tale as intriguing as Game of Thrones but told in Shakespearean verse and based on the actual life of the woman who could have easily been the inspiration for the Mother of Dragons.

The Theater for the New City, on the Lower East Side of Manhattan presents the story of Queen Margaret of Anjou, “She-Wolf of France,” who is featured in an unprecedented four of Shakespeare’s plays (Henry VI parts I-III, Richard III). The production team has taken on the ambitious task of telling Queen Margaret’s compelling story by pulling together a remarkably seamless patchwork of Shakespearean text from the plays she is featured in, and from several that she is not (The Tempest, The Taming of the Shrew, Much Ado About Nothing, among others), along with some original ‘Shakespearean’ verse. It is essentially a new Shakespearean play chronicling the story of a character who is just as compelling as her more famous male counterparts.

The production backs up its own ambitious aims—it feels like a coherent and original work of Shakespeare. Without any context regarding its creation, I imagine most audiences would simply assume it was one of Shakespeare’s more obscure works and then walk out of the theatre and wonder how it was not better known. The text-synthesis is expertly done, the drama is compelling, and this particular production is well acted throughout by a diverse ensemble of talented actresses. All actresses. In a reverse-homage to the Victorian-era tradition of men playing every role, this production uses only women, in a story of mostly-male characters, no less. I can hardly imagine a cast of men being more convincingly equipped to tell the story. The ensemble is well rounded and rather equally featured. It is the kind of production where it is easy to be surprised at the work being done by a seemingly-new performer on stage, only to realize several minutes into the scene that that actress has in fact been onstage for much of the prior hour of the play in a different role.

Furthermore, the production is creatively designed with its use of music, dance, and stage-magic that serve as narrative-glue and subtextual-illustration for the storytelling. It is a production worth seeing if you’re a fan of Shakespeare, political drama, creative theatrical design, or simply well-acted work that feels new even though it sounds old.