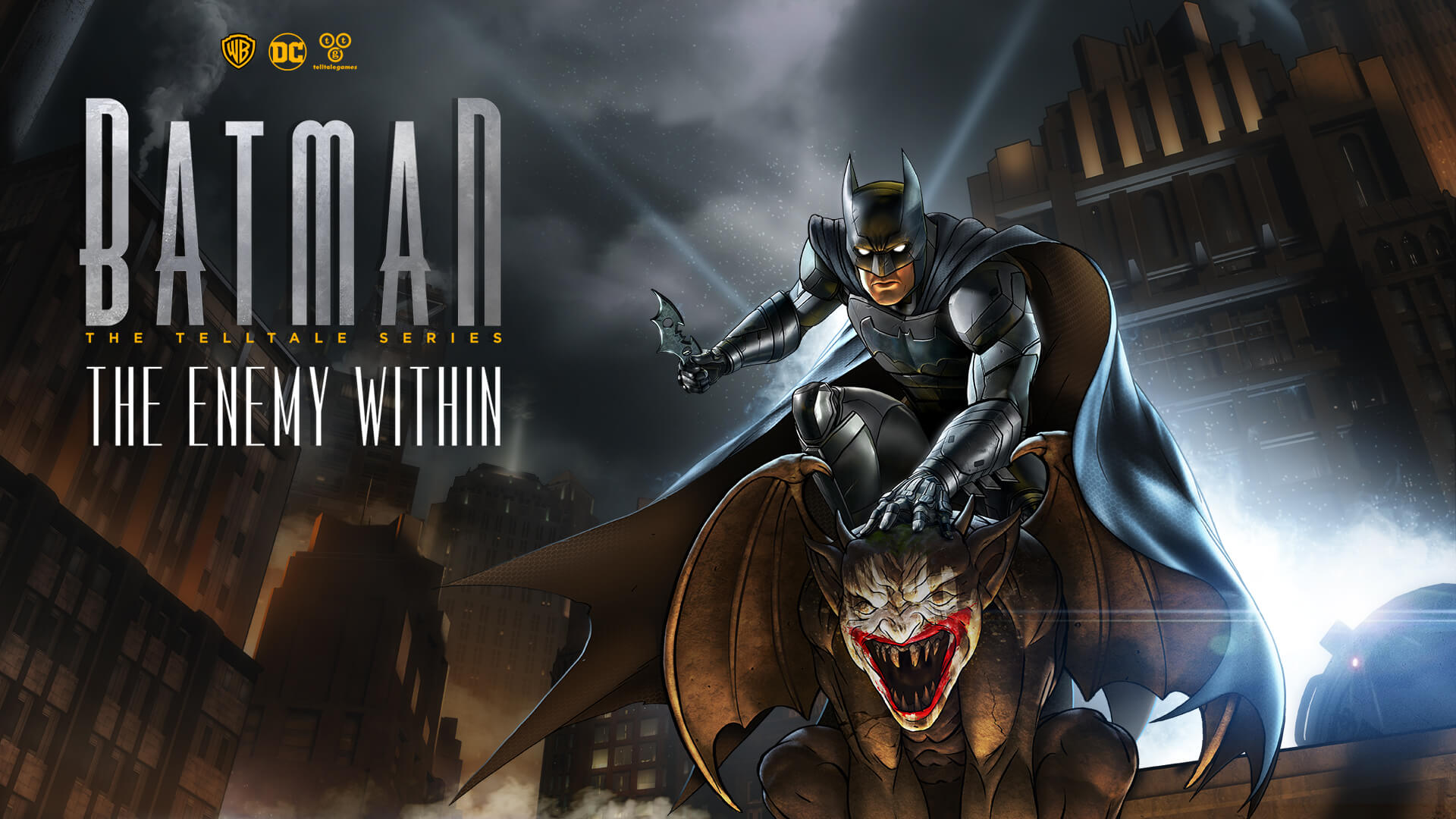 Telltale’s Batman: The Enemy Within, Ep. 1

I’ve loved Batman since before I can remember – the character and mythology has seemingly always been with me, from my early days laughing along with Adam West and Burt Ward as they fended off rubber sharks with Bat-Shark-Repellant Spray, to the seminal 1990s cartoon (still the greatest version of the mythology ever put to screen and the birthplace of Harley Quinn), to the comic I just put down to write this (Tom King’s stellar current run, The War of Jokes and Riddles). In fact, it was a video game that brought me back to the comics, with Rocksteady’s brilliant 2009 Batman: Arkham Asylum, whose highly engaging and well-written bonus content drew my attention to all the mythology I’d missed over the years and led to a graphic novel buying spree neither my wallet nor my sagging bookshelves have ever quite recovered from.

But with all the truly excellent (and terrible, looking at you Batman and Robin #NippleGate) Batman content out there, it’s hard to believe there’s room for something that feels truly new, but that’s exactly what Telltale Games achieved with their radical re-imagining of the Batman mythology in Batman: The Telltale Series. Shifting the emphasis to be split between the mind and life of Bruce Wayne and the crime-fighting escapades of Batman was a masterstroke and addresses one of the biggest gaps in a lot of popular interpretations (for my money, it remains one of the largest problems in the Dark Knight Trilogy).

Here, the player is forced to balance Bruce Wayne’s life in a way we normally only see with characters like Spider-Man: you’re holding a gala at Wayne Manor, but Carmine Falcone shows up and wants to shake your hand. The paparazzi are watching, but your pal Harvey Dent is begging you to make nice as Carmine is a major mayoral campaign donor. What do you do? The havoc that Batman and Bruce play on each others’ lives is fascinating enough, but Telltale took it one step further, dramatically re-imagining the mythology by making Thomas Wayne (of ‘bam bam, shot in the alley in every cinematic version of Batman ever’) the secret crime lord of Gotham. Suddenly, Bruce isn’t fighting to honour his parents’ memory, but to undo the wrong they caused. It jolts the player and prepares them for the many, many mythology bending twists to come (young Penguin, a surprise villain, an unshaped pre-Joker ‘John Doe’, and – depending on your choices – a Harvey Dent who becomes Two-Face in personality, but not in look, which is an absolutely inspired choice for the character, also explored in Frank Miller and Lynn Varely’s The Dark Knight Returns). By operating on its own canon, Telltale has room to play and similar to how Nolan brought us inspired versions of Scarecrow and Joker (and less successful versions of Ra’s al Ghul and Bane), Telltale is giving us options and stories we’ve never had.

Which brings us to The Enemy Within. The last game leaves us with an incredible threat hanging over our head: I owed the future Joker a favour. With this in mind, the game kicks off explosively with an interesting, almost Watchmen inspired take on The Riddler: if you’ve played the Arkham games, you’ll be familiar with the Saw-esque traps that modern takes on the character favour, but interestingly Telltale sets him up as an old (literally and figuratively) threat to Gotham, who terrorized it when Bruce was a kid, now returning to reclaim his throne. It’s a neat spin on a character whose motivation usually boils down to ‘I want to prove I’m smarter than you’ and results in a more vicious, murderous Riddler than we’ve seen before.

It isn’t long before Amanda Waller and ‘The Agency’ (one of the many code names for the organization that runs the Suicide Squad) show up to complicate Gordon and Batman’s investigation, with Waller threatening to take federal control and boot Gordon and Gordon questioning Batman’s loyalty. We’re also quickly met with a death in the Bat family, which yet again proves there is no safety net in the Telltale canon. It raises the stakes for the entire series in a really healthy way (as Alfred’s potential disfigurement at the end of the last game did too) and reminds players that without having to produce stories ad infinitum, Telltale can play with the gloves off.

While I won’t go much further into the plot here, the series has set up something that I was curious and nervous about that I’d like to touch on before Episode Two drops: the strange case of John Doe.

John Doe is visually about as Joker-y as he can be, straining aesthetic belief when compared to other characters in the series. You first meet him in Arkham as Bruce in the previous game, where he kinda becomes that weird, cheerful pal you can’t really get rid of. He saves you from a gang beating and even helps you escape, in exchange for a favour on the outside, which you can agree to or deny (I agreed to it, as Bruce’s situation is desperate and he doesn’t know who the Joker is).

The second game finds John Doe freed and he crashes a funeral, seemingly still well-meaningly. This isn’t the laughing lunatic of Mark Hamill in The Animated Series, or the ruthless mobster of Nicholson, nor the psychotic nihilist of Ledger (and certainly not Juggalo Jared Leto…); he’s a well-meaning, socially inept, blank slate. The game is actually asking us to shape him (a fascinating echo of my feelings about raising kids and shaping Clem in The Walking Dead series.

And then the real bomb drops: Harley Quinn is in the next episode. Harley and Joker’s relationship has always been problematic by design: in the heartbreaking Mad Love origin story (first in comic form, then in episode form), we are presented with a horrifyingly frank depiction of an abusive relationship and why people keep going back. With the growth in fandom for Harley over the years, though, this has proven problematic (particularly when DC took Joker out of the picture for The New 52), so she has now basically been re-invented as something akin to DC’s version of Marvel’s Deadpool (the matching colour schemes being entirely coincidental, as Deadpool is actually a parody of a DC character named Deathstroke); she’s a comedic, meta, anti-hero, who works with the Suicide Squad. Her backstory and old connection to the Joker are still there, but she’s spent years freeing herself from his abusive machinations (which is yey another reason why the Suicide Squad film is so appalling in its attempt to sell her and Joker as a Sid and Nancy story…apparently the original cut was much more about her trying to break the cycle of abuse, but I digress…)

So, the problem now is that it’s REALLY HARD to justify Harley Quinn without the Joker (hence all the five-second scenes with Juggalo Joker in Suicide Squad)…unless…

Here is by big hairy hope for this series: I’m hoping they flip the Joker/Harley dynamic completely, giving Harley, already suggested to be the Big Bad, the joker iconography…and have Joker fall in love and obsession with her. We have never seen Harely in full, autonomous villain mode, and given that the series is asking us to battle for the soul of John Doe/The Joker, what better way than giving him his version of Harley’s beloved puddin’…in the form of Harley herself?

There are a lot of awesome ways other than this that this could play out, but I kinda lost my mind when they presented it as an option (to my mind at least).

In any event, Enemy Within Ep 1 plays out like an excellent stand-alone and I’m just psyched I get more. The status quo and player expectation for the shape of the series to come are blown out of the water at the end of the episode and I can’t wait for more.

Also, big kudos for the latest innovation to Telltale’s mechanics: the system of character evolution first introduced in The Walking Dead Season Three has been brought over to Batman and applied to all the main characters. Now, instead of just hearing that someone noticed that or remembered it, you get a notice when your relationship to the character has changed and are informed at the end what state your relationships to other characters are in (just like you were informed who Clem had become, based on your actions). It’s an incredible way to punish and reward players and really puts you on edge: all your alliances are fragile…how many will survive your crusade?