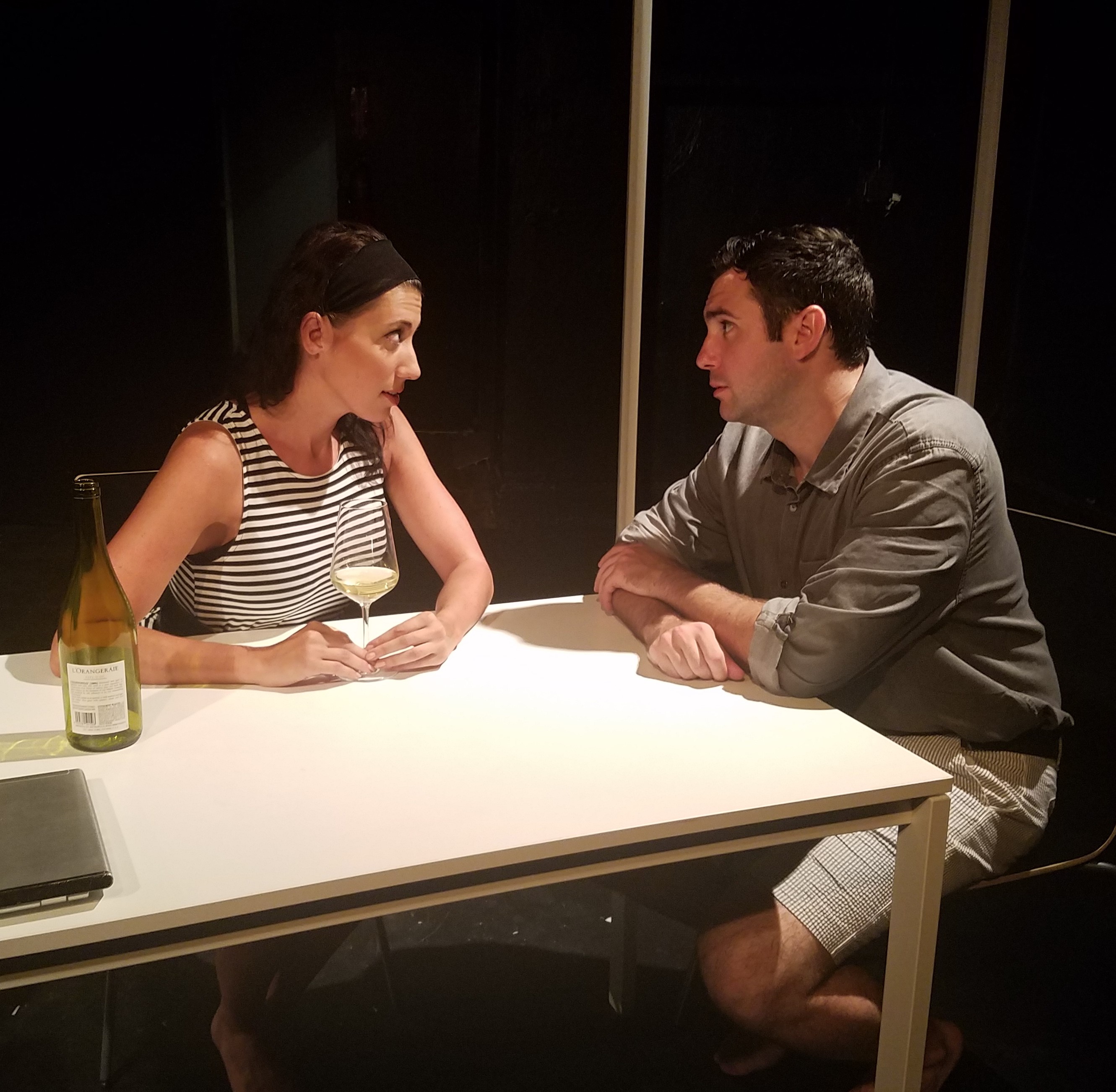 I’m a big fan of Antony Raymond whom I consider one of the city’s rising star playwrights. He creates rich unique characters with clear voices. As tensions and emotions inevitably build throughout his plays, the characters are primed to clash with each other. That said, the plot of his latest play, Apartment 301, feels undeveloped and rushed and the climax felt like a missed opportunity.

The play revolves around two roommates, Lacey (portrayed by Abbey Shaine Dublin) and Brooke (Morgan Scott). Lacey is a ballet dancer who has just discovered that she is pregnant, potentially derailing her career. Brooke is a Canadian actress who is struggling to find a job, and risks deportation if she can’t find employment soon. Both actresses do an excellent job of portraying roommates who are longtime friends with unresolved issues both with each other and in their lives generally.

Brooke is reminiscent of Marnie on the television show “Girls.” She’s judgmental, aggravatingly prim, pseudo-spiritual and self-absorbed. She insists that shoes should not be worn in the apartment. It’s easy to dislike her at first. Lacey is more trusting and open. In the opening scene, Lacey is taking a pregnancy test and is triggered by Brooke’s sanctimonious advice about always using a condom. Brooke presents the advice with condescension but also from a place of concern for her roommate. They argue but quickly reconcile and go out for drinks and a movie.

This is a play and plays of course need drama. Enter Jim (Eric Doviak), a new neighbor who is anything but ordinary. He’s an eccentric and awkward chatterbox who can make any situation uncomfortable with his incessant tangents and audible self-reflections. Jim is child-like and full of confusion about why people act the way they do. He never explicitly states that he is autistic, but he exhibits many of the telling characteristics. The character of Jim works especially well to expose the women’s underlying feelings because his naiveté and oddness ends up being so disarming. Lacey quickly develops a friendship with Jim, and his non- judgmental demeanor allows Lacey to open up to him and use him as a confident.

The play is most interesting when we watch both Lacey and Brooke use Jim in unique ways to fulfill specific emotional needs. Brooke’s jealously and issues with self-esteem become apparent in her conversations with Jim. Lacey’s need for emotional companionship similarly reveals itself. Although Brooke initially dismissed Jim as a weirdo, she becomes envious of the bond Lacey and Jim develop. And in perhaps one of the most awkward and tense scenes I’ve seen in a play in recent memory, Brooke and Jim go on a pseudo-date in which she explains the norms of dating to Jim. As he begins to take her advice, the sexual tension rises and, as expected, the relationship dynamics in this love triangle are tested and pushed to the extreme.

But then everything falls apart. After about 70 minutes, it seemed like the invisible hand of drama decided, “okay, time for a big finish.” With that, the play goes from a slow burn drama to a complete horror story. The tonal change was jarring, and violated the audience’s expectation the way a high-speed car chase would be confusing if added to the last 10 minutes of an episode of “Downton Abbey.”

I would have preferred an ending without the (literal) theatrics. The “big finish” ending skirted a more difficult resolution that would have forced the characters to confront their own weaknesses, their betrayals, and their needs for validation. Instead, the grand ending deprived the well-developed characters from resolving issues in a relatable way. This is too bad because I would have spent more time with these characters.

Elsinore County Theatre world premiere of Apartment 301 is playing at the Access Theater through August 18.