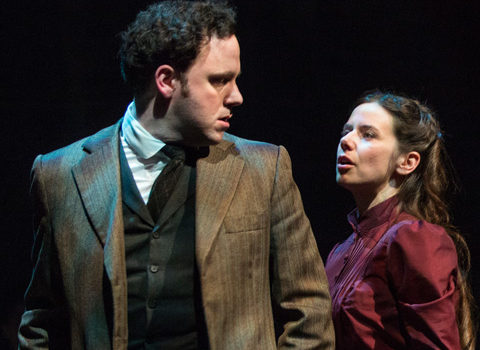 Soulpepper’s Of Human Bondage features a strong cast of talented actors, and some truly innovative staging. Unfortunately, it’s not enough to save the production from a tiresome story filled with unlikeable characters.

Of Human Bondage is a solid production. But if you don’t like stories about selfish people making selfish decisions while barely growing or learning, this is not the show for you. If you don’t need to necessarily like any of the main characters, or most of the supporting characters, but are interested in dramatic examinations of human nature and in particular, obsession, you’ll probably want to check this out.

The story follows Philip Carey (Gregory Prest), a med student/former artist who becomes obsessed with a teashop girl, Mildred Rogers (Michelle Monteith). Mildred keeps finding new and interesting ways to screw Philip over, and yet Philip keeps letting her back into his life.

It’s like when you have a friend who is in an on-again-off-again relationship with a terrible person, and even when they insist they’re done dating, and are “just friends” with their ex, they get sucked into the same emotionally destructive whirlpool. And each time they swear it’s the last time, but you know it’s not, and they know it’s not, and you know they know it’s not, but you all pretend it is. And then when the terrible ex pops up again, your friend says “Maybe it’ll be different this time”, but you know it won’t be, but nothing you say or do will stop the inevitable train wreck from happening, so you just have to be like, “Yeah, maybe it will be different this time” and support them through the coming catastrophe. Of Human Bondage is like that. Except Philip isn’t my friend, and is kind of awful sometimes, so it’s hard to care when Mildred screws him over yet again and he’s left dealing with the very predictable consequences of his bad decisions everyone warned him against. To make matters worse, Philip can’t explain why Mildred has this effect on him, she just does. If Philip doesn’t understand his obsession, how can the audience? It’s not simply love or lust, but whatever it is, it’s never explained.

Even if you have little patience for the story, the production itself is very well done. The actors are always busy, even when they’re not in the scene. They create all the sounds – they play instruments, sing, and provide ambient sounds of busy cafes and bustling streets. It’s impressive to watch this world being brought to life through the sound.

The set design is also intelligent. In the center of the stage is a large red square that Carey never leaves. (Kudos to Prest for maintaining his character’s emotional intensity and physicality – Carey has a club foot and walks with a limp – the entire time). The actors move around the furniture to create the different settings: Carey’s rooms, the hospital, the street, the cafe, the theater, the park, and more. Throw in the show’s clever lighting design and you have a vivid world created with very little. The minimal but brilliant production brought to life through a committed cast is more effective than some multi-million dollar Broadway extravaganzas.

Of Human Bondage is an expertly conceived show, filled with strong performances. If only the talented company were using their considerable talents on a less frustrating story.