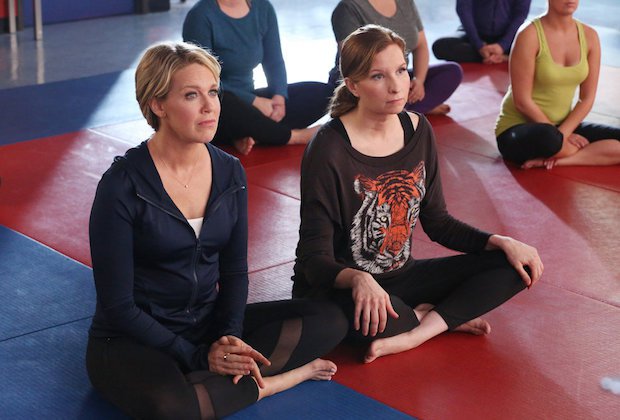 For the Love of BFFs

As much as I swear I really did appreciate the hilarious beauty of USA sitcom Playing House back in its excellent first and second seasons in 20014/15, you never really know how much you love something until it’s gone. Or maybe how much you missed something until it comes back? Either way, the rush of happiness that flooded my heart upon the return of Playing House a few weeks ago was fairly profound.

I generally have two types of sitcoms that I enjoy- ambitious, often quite absurd, sometimes genius, hit-or-miss cable offerings that burn really bright or merely annoy on any given day (It’s Always Sunny is the perfect example of this phenomenon but Veep also works) and nice, digestible, mostly family-friendly sitcoms that range from mediocrely enjoyable to delightful, but they generally avoid the low lows by never really striving for that high of highs (New Girl, Mom, anything on ABC). I really really like both of these styles and they each play an important role in balancing my TV schedule. What’s so incredibly wonderful about Playing House– especially this third season- is that it finds a beautiful middle ground between those two types. It has the consistency and niceness of a network job but the auteur-driven brash oddness of a cable comedy. It’s the ultimate sweet spot of sitcoms.

The premise- career gal gives up everything to move home to help her newly single childhood best friend raise her baby- works for lots of reasons (small town world building, natural conflict, open-ended storytelling) and the supporting casting is great (Keegan-Michael Key, Lindsay Sloane, Jane Kaczmarek, my bae* Zach Woods) but, as much as Louie, or Curb Your Enthusiasm, or whatever other personality-centred half hours you can think of, the success of Playing House comes down to its creator/stars, their chemistry, their voices, and their charm. Lennon Parham and Jessica St. Clair are powerhouse comedy machines who lean on their improv backgrounds to set a unique tone of naturalism despite a joke rate that boggles the mind. The fact that they accomplish that while telling an emotionally grounded story with well-developed characters I care deeply about is just plain awesome.

In any given episode of Playing House, there might not be a single man. There might be three or four (Ben Willbond as a sexy/prickly/insecure doctor, or perhaps Brad Morris as the cheating ex-husband who gets to be a full-fledged character rather than a cartoon villain because Parham and St. Clair like their people to be people) but there might be none, and you might not even notice. This sounds so reductive but the women of Playing House– Maggie and Emma- are complete in a way that even the strongest of TV’s “strong female characters” often aren’t. They talk about romance and crushes and Magic Mike XXL with the candid abandon of sexually interested adult females who aren’t worried that those topics will take away their power, but the men never actually show up unless there’s an actual story reason for them to be there. My favourite example of this is in the series-best episode, which aired last night. Emma is preparing to undergo a double mastectomy with simultaneous reconstructive surgery and is asked to pick between three synthetic options “which feels the most like your boobs” and can’t decide. I was expecting the easy joke about bringing in her boyfriend for an expert opinion but, instead, her best friend Maggie just feels her up and declares that option #2 is the best match. Keegan-Michael Key, delightful though he is, doesn’t need to be brought up every minute just because he can be. This episode also features two doctors (Laurie Metcalf and Michaela Watkins, because the guest star gods smile upon this show) and somehow they’re both female and at the top of their game and sympathetic and funny without being sexualized, identical, or specifically contrasted “types”- they’re just two awesome docs being awesome while also being female; what?!

Every episode of Playing House is super wonderful and makes you want to send flowers to the USA offices for investing in these two 40-year-old oddball ladies who just want to make a great show about how much they love each other. It’s like a hilarious knockout punch of goodness infused into the world for a couple weeks in the summer and, after a two-year hiatus, even just 8 episodes feel like a gift. “You Wanna Roll With This?”, though, that’s the episode that the series will be remembered for. Season three is playing out two episodes at a time and, last week, we learned that Emma has breast cancer (a storyline stolen from St. Clair’s real life, perhaps a non-ratings explanation for that two-year hiatus). This week, we saw her deal with it. It was a short story, an oddly swift handling of something most shows would have dwelled on for 13 episodes at least. The first of this week’s two instalments of “dealing with it” was the aforementioned gem that takes its title from the binder Maggie makes to try and intimidate cancer into submission. This is where we got Magic Mike XXL, and Metcalf & Watkins, and Keegan-Michael Key sent to the sidelines because Maggie was the person Emma needed by her side (and Mark, that’s KMK’s name, got to have complicated feelings about that, because everyone gets to be a whole person on this show). The fear and anger and absurdity and fragility of St. Clair’s experience were captured perfectly in a half hour no less laugh-out-loud amusing than any other. Perhaps even more heartbreakingly, the fear and anger and absurdity and fragility of Parham’s experience were captured just as perfectly as Maggie brave faces her way through with the reassuring confidence that Emma needs, no matter how much doubt she actually has.

It’s a remarkable half hour of television and, hopefully, all the headlines the story’s “ripped from real life” angle has brought will result in viewers. Because I really need a season four.

*That’s the first time I’ve ever used the “word” bae. Did I do it right? I feel old.