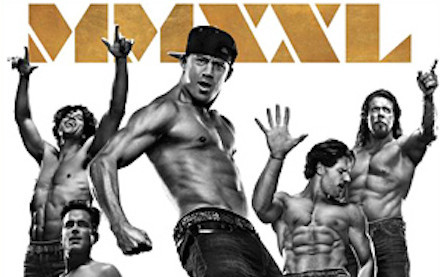 Kelly, when she reviewed the first Magic Mike, concluded that it was two movies that would have been better served by each having their own film. Her wish is granted in Magic Mike XXL – a female fantasy of being a “male entertainer” that is probably the most feminist film I’ve ever seen that doesn’t pass the Bechdel test. It is the very definition of the heretofore non-existant female gaze – so much so that I was shocked that there wasn’t a woman behind the camera at any point.

And it was fun! Shot in the same laid back style as the Soderbergh helmed original (not shocking given that the director of photography remained the same, and that the new director, Gregory Jacobs, served as 1st AD on that film), the movie is imbued with so much sexy nonchalance it occasionally threatens to completely derail the “plot.” This is a movie so decidedly casual that they make a point of letting us know that the cumulative Stripper Convention is NOT a competition – there’s no prize to win bigger than getting one last great night with the boys, giving joy to the ladies.

They didn’t even bother to make up a name for the Stripper Convention – it’s just there on the sign as “stripper convention.” It’s a masterclass in nonchalance and awesome dance moves.

Whether it’s the random drag performance, which exists merely to let us watch Channing Tatum Vogue, or the the sojourn to seduce middle aged women, the movie is less a plot than a connection of scenes that allows each segment of the audience to feel included. It’s all completely without consequences, and completely without neccesity, but it’s fun. In the first movie, Tatum’s Mike was motivated by Dreams with the self-conscious capital D. Here, he really just wants a brief break from pursuing his dreams, and a weekend to forget about some mild heartache (also passed by with more of a hand wave than emotional resonance).

Which is all probably the best choice the filmmakers could make. This movie was fun. It was sexy. It was a female fantasy, which is a cool alternative to all the male fantasies at the box office. It features Jada Pinkett Smith wearing awesome hats and Joe Manganiello wearing next to nothing. It was, indisputably, XXL, even while barely bothering to lean into that pun. For a movie based on a marketing campaign, it was pretty fun, and if you can sneak in tiny bottles of chardonnay like the lady cliche you are, I say go for it.