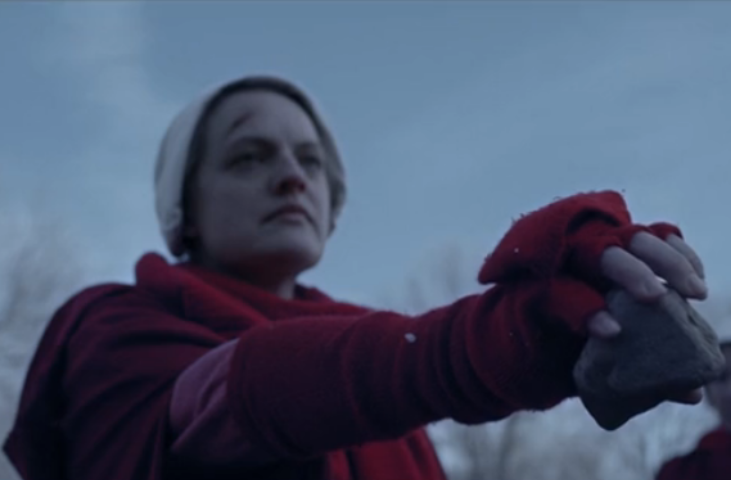 In a lot of ways, both for me as a reviewer and for this show that I cover, we end like we began. I started with a two-episode binge that at turns entranced and horrified me, and I end on a two-episode binge that left me agitated and exhilarated – just like June, who ends the season in much the same limbo as she began, but with a different emotional undertone.

“The Bridge” and season closer “Night” are two episodes packed tight with plot and character moments, careening towards the end of the season and an uncertain future for both the show and the women we’ve grown invested in. We’ll start with “The Bridge,” which may have been my favorite of the two, if for no other reason than because “Praised Be, bitch” is tailor made for protest-ready t-shirts.

“The Bridge” is an important restructuring on how profoundly, disturbingly, all-encompassingly terrible Gilead is, and it uses that restructuring to move our characters from passive participants to actors of their own fate. It’s hard in a series as realistically depressing as The Handmaid’s Tale to tell a story of hope realistically, and “The Bridge” takes important strides down that path.

It can be easy to get caught up in the minutiae, to live the lie that June has constructed around Offred as an obedient servant and participant in Gilead’s society. There are moments here where the episode threatens to turn into a sexy spy thriller. In the bad version of this episode, June is using her sexuality to control the men in her life and get what she needs. It’s Angelina Jolie, it’s The Honeytrap, it’s a goddamn James Bond film.

In the reality of The Handmaid’s Tale, however, June is pivoting on the edge of a knife, and the episode never loses site of those stakes. It’s only in The Commander’s eye (and maybe in Nick’s) that this is a sexy tryst. In reality, it’s rape in a fancier location, and a chance to wrest back some small semblance of power.

Moira reappears in a scene that was heartrending in its oblivious cruelty. And it’s Moira who has the greatest arch here, who takes the first steps towards “actor” from passivity. June’s impassioned speech may have gotten her there, but it’s Moira who takes off into the night to try her luck against the bastards.

But just as “The Bridge” undercuts the sexy spy thriller, it also has to undercut the idea that these wounds can be undone easily. In “The Bridge,” the horror gets made explicit in the body of Janine. She’s a physical manifestation of all that’s broken about Gilead – from her eye to her desperate, manic giggle – all while also being the only person we’ve seen produce Gilead’s promise (babies). So watching her passed off to another rapist, all while her kind, smiling missus looks on, is the ultimate manifestation of the rot at the heart of this society. By the time she’s standing on a ledge, baby in hand, ready to end both their lives, you’re not entirely positive of the right next steps. What does a kind parent do in this situation?

June’s mission statement is on display as she saves Janine’s baby but can’t save the woman herself – her reliance on hope and connection to get her through the darkness. And after Janine plummets into the depths, it’s enough to set June hurtling towards rebellion.

But first, a beginning, the “Night” — terrified women who are not used to terror, hurdled like live stock, tagged for safe keeping, tazed for obedience. Aunt Lydia at her most horrific, loving her true-believer ability to control the women around her. June at her most confused and in pain.

Contrast that with June now, resolute, still in pain, but past terror. Or for that matter, Aunt Lydia, who seems broken down by the compromises of her society and the pain she causes. Or Serena Joy, who crosses the boundary into cartoon villain when she overtly threatens June’s daughter while keeping her locked in a car.

Let’s talk Serena Joy for a quick moment. Of all the things I loved about this season, I’ve spent a lot of time talking about Yvonne Strahovski, who has truly done great work in the role. But I’m left, after the season finale, hoping that her story isn’t done. Serena Joy appears to be a force for the writers to move plot along, bounding effortlessly from violence to tranquility to desperation. It’s not that it’s unbelievable – it’s just that they’ve filled to color her in enough to justify it all. I have private theories about Serena’s back story – about her knowledge of babies and the fact that she seems to already have so much baby stuff and the vast gulf between her relationship with her husband in flashbacks and their relationship now – but the show as yet hasn’t done enough to deepen our central antagonist.

When June unloads a barrage of obscenities on Serena Joy following the car scene, to which Serena chillingly responds, “Don’t get upset. That’s not good for the baby,” I wrote over and over in my notes how much I wanted Serena Joy dead. But she’s a character with zero power, as evidenced by episode’s end, and I want more to her than just free floating evil. Handmaid’s Tale is all about the corruption of powerlessness, and the power of individual’s to rise above it, and I want more.

But enough of that. This brings us to one of the most fantastic, heart pounding scenes the series has yet produced. In a mirror of the pilot, the handmaids are called together to be the vehicle for a public execution. Only with each day that passes in Gilead, the fear of death and torture diminishes. As June puts it early on, “They shouldn’t have given us a uniform if they didn’t was to be an army.” And when, in the ultimate show of hubris, the handmaids are ordered to stone Janine to death – to take the life of one of their own – they show the limit of torture as an act of control.

The “Great” Revolution that created Gilead is eating itself. It’s evident in the handmaid’s rebellion, in the look in Aunt Lydia’s eye, in the taking of Commander Warren’s arm. And it’s the Handmaidens who will finish it off. Whether it’s Moira, who in this episode crosses the border into Canada and who’s reunion with Luke made me cry big sloppy tears. Or if it’s June mainlining the precious words of thousands of other women trapped within the country. Or if it’s a pack of handmaids who have just discovered their own limits.

The episode ends with June being loaded into one of the eye’s black vans, a fate that had seemed worse than death for this season. But here, it has the glean of freedom, with the memory of her recent rebellion strong, the warmth of Moira’s escape, and as Tom Petty’s “American Girl” blasts over the credits.

We’ve reached the end of where Margaret Atwood’s book takes us. Next season, we will be in uncharted territory, the tearing down of a system so pervasive as to feel impossible. And I couldn’t be more excited.