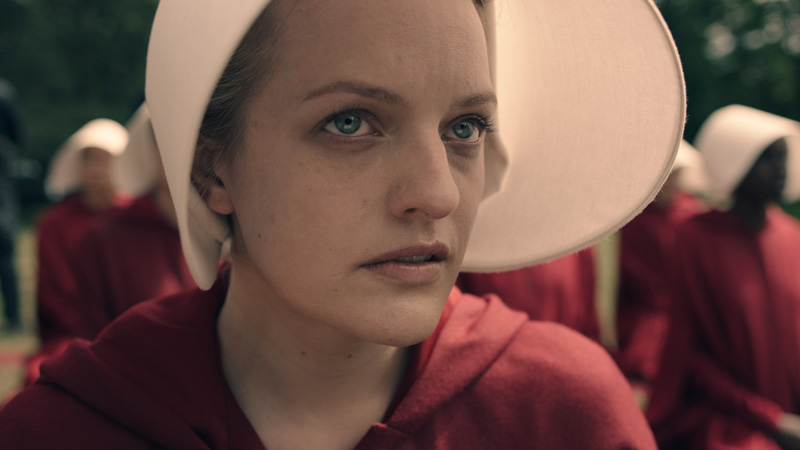 AUTHOR’S NOTE: The below review represents the first two episode’s of Hulu’s new show, The Handmaid’s Tale. We will follow up next week with the second two episodes, and from then on will respond weekly.

I wonder what world the creators of The Handmaid’s Tale thought they would be releasing their televised baby into. A quick google search tells me that most of production happened in September and October of 2016 – a heady time when it was entirely possible that this daring, painful, deeply-feminist* TV show was going to be released to an America with a woman president and the future of reproductive rights in this country pretty secure thanks to her future Supreme Court picks.

Instead, we live in 2017. And that makes The Handmaid’s Tale terrifying.

Don’t get me wrong, it would always have been terrifying. In fact, you need look no further than the response of people from the Right Side of the political spectrum than to understand that Margaret Atwood’s tale of a repressive society that attempts to control all aspects of women’s lives resonates across the political spectrum. Fall 2016 didn’t suddenly create repression of women’s bodies and minds. When I first read the book, back in the 90s, I found myself thinking of the Taliban and the women of Afghanistan as much as the American Puritans and the rise of the Religious Right.

But it’s especially terrifying to watch this today and, regardless of whether its creators knew the full context when filming it, the team behind the show ring every last ounce of dread out of their world.

We should begin with the development of that world. Handmaid’s Tale stars Elisabeth Moss as June/Offred, a “handmaid.” In the not-so-distant future, birth rates have plummeted and a religious theocracy has popped up in the chaos of modernity. At least in the first two episodes, the specifics of that chaos remain vague, but there’s references to some civil war that left the United States torn and oppressed. Women in this culture (and men, although we explore this less) are given strictly prescribed roles. They’re a wife, a “Martha” (a maid), or a “handmaid” if they have two good ovaries. Handmaids serve as walking wombs for rich, barren, couples to impregnate. The whole thing is shrouded in ritual and religious significance.

The scariest part of the show, however, is not necessarily its glimpse into the future world. It’s the glimpses into the past, which looks a lot like our present. We see Offred back when she was June, a young woman living with her husband and hanging out with her best friend, talking about anti-sexual assault activism and enjoying the world. June (and her best friend, Moira) are us. Moira (Samira Wiley) casually talks about her Ubers and the word has never struck more fear into my heart. Their world is self-consciously styled to feel vital and near to the audience. Watching Moira, in particular, go from being an out and proud lesbian, to a handmaid within the course of a few short scenes is one of the most affecting jumps in a show full of them.

The first two episodes feature a lot of world building and the tantalizing beginnings of a plot. June’s world is full of distrust- as Alexis Bledel’s fellow Handmaiden puts it, “They’re very good at it, making us distrust each other.” Every character we meet- from the handmaidens, to the Marthas, to the Commander (Joseph Fiennes) who owns space in June’s womb- are oppressed and made small by the society in which they live. They’re all dangerous, however, because they also all live under the omnipresent watch of The Eyes, a group of men with large guns and dark vans who periodically arrest people. The Eyes also have secret agents embedded in the great houses to make sure that all things go according to plan, making no one safe. The choice to trust anyone is incredibly foolish- and it’s also essential to maintaining sanity. Because of this, every scene is overloaded with extra meaning and malice.

The show does a remarkably effective job of showing us how this world has deconstructed the people who live in it. June’s voice over is particularly great at this – hearing her modern thoughts contrasted with the stilted dialogue of The Handmaid’s world is jarring. The scene where a group of Handmaids kill a man as punishment for rape – watching these women with absolutely no power over their own bodies take the life of someone else – is difficult and one of the most perfect visual encapsulations of the complicated nature of oppression that I’ve ever seen.

And enough truly can not be said about Yvonne Strahovski as Serena Joy. Serena is a wife, married to The Commander, and in many ways the obvious antagonist of June. But to the show’s ultimate credit, it doesn’t even toy with the idea of painting Serena as a pure antagonist. Instead, from the first shot, Strahovski imbues Serena with pain and fear, making her an obvious victim, another human being struggling to maintain herself within this terrible world.

The world of The Handmaid’s Tale feels far too close, far too real, far too believable, and yet it doesn’t feel like a polemic. I may have started this review talking about the political relevance of the show in the year 2017, but the beauty of the production is that it can, and does, exist separate of that. It’s a compelling watch, beautifully rendered and delivered, and the start of an intriguing series.

Future installments of these reviews will likely focus more on plot and how they further develop these themes. For now, I’ll stew in the two episodes I just took in (the third, also released by Hulu in one bundle, was just too much for me to handle in one night) and think about the myriad ways that the show makes me think about the world around me.

*there’s been some inexplicable controversy over whether or not the show is “feminist” or not. This is stupid. It’s explicitly feminist. The only way it’s not feminist is if you hear the word “feminist” and then immediately flash on Rush Limbaugh ranting about feminazis.