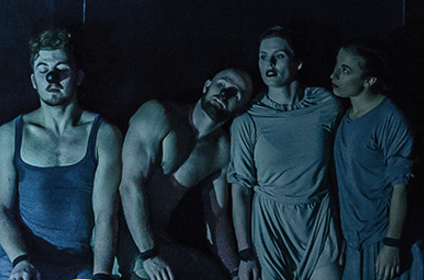 Spotlight Australia: The Return by Circa

The final offering of the Canadian Stage Spotlight Festival: Australia was The Return by Circa, a genre-defying combination of cirque and opera. The stage is shared equally between the circus artists and the live chamber ensemble, with the former occupying stage right, and the latter stage left. An imposing black wall spans the width of the space midway downstage, pushing both the orchestra and the cirque action towards the audience.

While the Circa Ensemble sang and played excerpts from Monteverdi’s opera Il Ritorno d’Ulisse in Patria (The Return of Ulysses to his Homeland), seven acrobats utilised exaggerated physical tension, hyper-extension and contortion to communicate a sense of displacement and discomfort. The performers actions and interactions (on the ground and in the air) create grotesque tableaux, the effect transmitting an uncomfortable kinesthetic sympathy throughout the audience (though there was no lack of awe-inspired gasps as well).

The shows themes of forced displacement and a longing to return to safety (or home) became strongest in the second half when the performers began interacting with the ever-present black wall. As the acrobatics scale, hang off of, and are pushed up against it, the imposition of its presence and the characters inability to overcome it as a barrier creates a sense of frustration and despair. The symbolic presence of the wall itself a vivid visual reference to the threat of walls standing and planned that dispossess people of their homes and wellbeing.

An eclectic and dark performance, The Return pushes the limits of what we expect from both a cirque and an opera show, in both form and content.