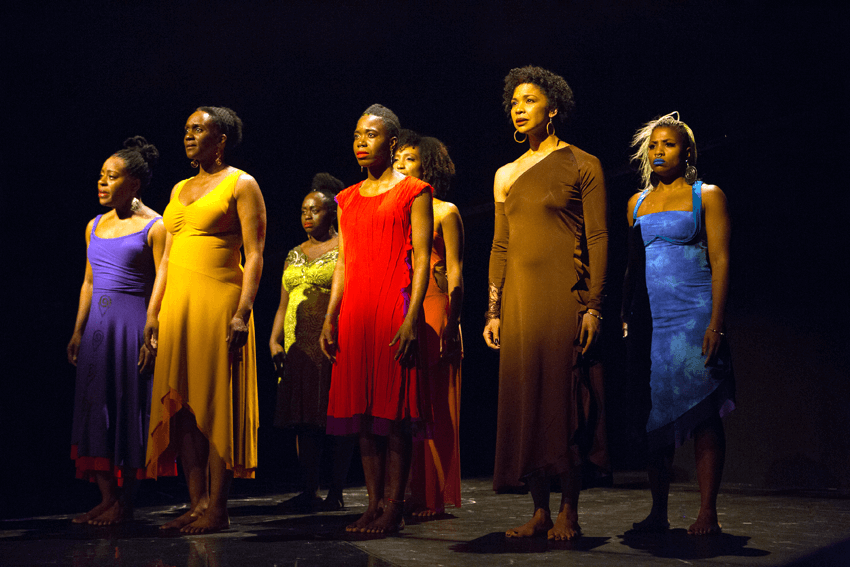 At Soulpepper: For Colored Girls…

Soulpepper’s For Colored Girls Who Have Considered Suicide/When The Rainbow is Enuf is now on at the Yonge Centre. Ntozake Shange’s play was originally written in 1974, but still resonates today as deeply relevant.

Directed by Djanet Sears, the show depicts seven women, each distinguished by different colours, representing every colour of the rainbow, as well as brown. The play is known as a ‘choreopoem’, an extended poem that weaves its way through various monologues, choral speech and song. Each woman plays multiple parts, performing at least one monologue and playing various supporting background roles for the others.

Each monologue tells a very different story, one narrating a girl’s coming-of-age, another a story of heartbreak, other stories of abuse and assault. The women are each strong independently, and their dynamic as a chorus is solid. Each actor owns the time and space in which she’s acting, building a rhythm and a world for us from her voice, her movement, and her imagination.

This show vacillates between hysterically funny, deeply touching, and entirely heartbreaking, and more than once I had tears streaming down my face. By far one of the most powerful monologues is performed by Akosua Amo-Adem as the Lady in Green. Hers is a speech enacting a kind of reclamation in which she demands compensation for ‘her stuff’, which we eventually realize is a performative reclamation of herself. This monologue came about two thirds of the way through the show, and is well-timed as a rousing, powerful moment right before the show takes another, darker turn. The show closes on two of the darkest stories: one about a woman whose partner is secretly gay and how she contracts HIV; and the Lady in Red (d’bi.young anitafrika) who tells the story of a woman whose abusive partner finally escalates to the point where he threatens and kills her children in front of her.

The design of the show is simple, with a curving (rainbow-shaped?) ramp on which some of the action happens, but mostly the stage is empty, with a black backdrop, allowing the women to take up space with their bodies, reinforcing the core point of the stories. The only thing that I am not sure about is the accent choice. This show – this particular production – sounds very Canadian. Written by an American poet with American characters specific to certain American sub-cultures, I do wonder how the accents affect and infuse Shange’s characters and her poetry, and if the decision to leave the specific accents aside is an attempt to make this production more accessible or relatable to Canadian audiences. I also wonder if aspects of the poetic musicality and characterization are lost as a result. One the one hand, Shange’s writing is built from the fabric of the dialects which have been woven from the cultures that resist the dominant linguistic narrative; on the other hand, perhaps that’s exactly why her writing should be informed by the dialect of the culture in which it’s being performed.

Regardless, this production is one of the most vibrant and lively pieces of theatre that I have seen in ages. The entire audience was attentive and reactive, often reacting audibly to what was happening onstage in a way that made the experience feel more dynamic, more conversational that theatre usually feels. And although it was written over 40 years ago, this play is exactly the kind of storytelling we need right now. These stories, these characters are more relevant than ever.