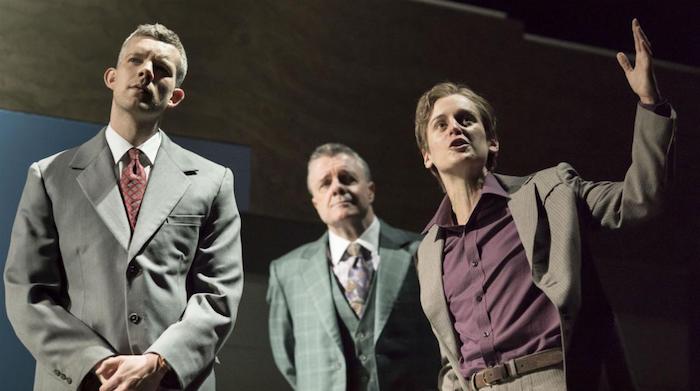 Angels in America: Parts I & II at the National

I’m gaslighting myself in going to the big shows. Shows that scream, shows that flash, shows that flail their banality around like spaghetti and people clap. They clap! They clap. Why review? It’s hard to be in a room with 890 people who probably disagree with you. I wasn’t in love with Angels; I don’t even think I would call it a friend. And I can’t help but feel like giving up when this is The Best There Is.

Angels in America is Tony Kushner’s long epic, 7h 30m, that intertwines the lives of Joe (Russell Tovey), Harper (Denise Gough), Louis (James McArdle), Prior (Andrew Garfield), Hannah (Susan Brown), Belize (Nathan Stewart-Jarrett) and Roy Cohn (Nathan Lane) to explore the gay politics of the 80s. Louis leaves his AIDS-afflicted partner Prior; Prior experiences Angel-inflected delusions in concupiscence; Cohn tries to hide his AIDS under the cover of liver cancer though nurse Belize is quick to know the truth; Cohn’s clerk mentee Joe abandons his wife Harper to have his first male-to-male fling with Louis while she enters the same abandonee dreamscape as Prior; Joe’s staunch-Mormon mother Hannah takes a trip to New York from Salt Lake after finding out her son’s orientation from a drunken phonecall.

All this Weight and all these arcs resemble either a cathedral or a soap opera, and yeah it’s impossible to tell which. Maybe that’s Kushner’s hi-lo pomo mandate being a man of the wry 90s, but I couldn’t shake the complaint of DFW’s ‘E Pluribus Unum’ while watching—I know it’s not TV, it’s a theatrical fantasia of naturalism and delirium and fabulism, but still, something feels gut-level uncomfortable in the play’s archness. Let me explain: American irony isn’t British irony, and I’m not drawing the same lines of humor vs. humour as in American Office vs. British Office. And sure, there are theatre laughs (see my Ferryman review) on both continents, but the problem is classed-aligned. American archness is a pop at snobbery; British archness is reification. Geez…. this is hard to explain. But consider: in response to the ‘literal’ Angel (Amanda Lawrence) heralded by bright lights, rumbing and voices from on high, Prior says ‘very Spielberg’, and of course that joke is rooted in a camp respect for the overdone, but it’s mostly a show of diffidence, a kind of liberal American diffidence born in fear of overstepping Willy Loman-style—’I can’t make bold unqualified gestures in the pursuit of a great idea’. That sentiment’s shared in a way with British audiences, although we don’t care for ‘great ideas’. When they laugh it’s a punch upward; when we laugh in the National (there’s no federal equivalent) it’s a maintenance of stasis. In both cultures political sincerity’s a no-no but more so in British Theatre, and the scoffing, detached parts of Angels graft on to our conservatism. So a politically-motivated 7-and-a-half-hour play at the country’s largest subsidised theatre will bow its head in irony. Anger will be laughed off. The patrons will get their money’s worth. And I’ll end up hating a play I once admired.

Maybe it’s Marianne Elliott’s direction, which lets it trundle on through long long longueurs and pinpricks of insight. Part I, Millennium Approaches, has Ian MacNeil’s set of three rotatable discs on which stand the corners of various interiors. Each array of spun-around jigsaw becomes a new location, yet characters from the previous scene stick around in semi-darkness before awkwardly departing. It’s messy. It’s a uni production with infinite budget and no vision; most of all it’s ugly when it’s meant to be glossy. Part II, Perestroika, clears the stage for scenes in the main in squares of light, with bits of furniture taken on/off by slinky black morphsuits redolent of lesions. The confinement and actual approach to space fare better, though the scenes are still often blocked in a ‘there hasn’t been movement in the last five minutes’ way. Rarely, half the Lyttelton opens up and the scale manifests; in his script Kushner demands that the play’s big moments need be big, but despite the resources at hand the fact the production can’t match what Robert Icke did WITH FOUR BLACK PANELS in The Red Barn is shameful.

For the greatest play of the 90s, Angels really isn’t. I read the script last year and loved Cohn’s scenes and nothing else. On stage, I liked Cohn’s scenes and nothing else, because Cohn is the awfully watchable embodiment of what Kushner hates, whereas everyone else is what Kushner loves or at least sees as a passable aspect of himself. Everything in Cohn’s presence burns with the playwright’s anti-Reaganite anger and while you can’t adore the character himself you can respect his dramatic force. His anti-communism, anti-gayness, anti-weakness-of-any-kind is the locus of all political energy in the play; otherwise, Louis is the cowardly theorist, Belize is headstrong with little to no praxis, Joe is pathetic, Harper is pathetic and Prior is the noble, noble sufferer. Almost 8 hours and everyone but Cohn is sketched thin. How does that happen? In the Ferryman review I mentioned how it felt as like something shifted. Angels is more than double the length and nothing moves. The progression’s weak: people just get sicker or smugger, and with Kushner’s penchant for gauzy images and half-assed argumentation the whole experience comes as a jagged square becoming a wheel becoming a sphere until every contour or texture is shaven off. Hypnotic void of a play.

No doubt Nathan Lane’s awesome. He has that vocal tone, like it’s supported by two diaphragms in tandem, and he pushes it to the greatest, most fantastic lengths in Cohn’s starbursts of fury and fear yet pulls it back for the fallow of Part II in quiet dignity. He contrasts to Gough who handbrakes her intonation, circling the same few tones with a kind of rhythmic regularity that made her People, Places, Things performance so singular. Shame her and Brown’s characters are cut off at the knee—it’s the story of gay men to be sure. Stewart-Jarrett is superb and I‘ve no idea why he’s not on stage more often. Tovey is milquetoast, but I guess that’s the point. Garfield… I worried at his entrance, with his tic-y flicks of the head and laboured vowels, but I warmed to him. He’s a damn decent shouter, and though I wanted a theatrical colossus because Prior’s the main role I wasn’t disappointed in any way.

I don’t know if I want to see anything hyped anymore. It’s not worth the encounter with the inbred ecology of critical thought. And I just won’t believe the people who love this Angels. It’s hard to believe I even sat through the whole thing. It’s a blur. That’s not good.