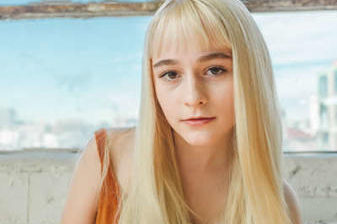 Despite her young age (15), Sophia Anne Caruso has developed a diverse and impressive body of work, with her most recent stage appearance in David Bowie’s musical Lazarus opposite Michael C. Hall garnering accolades and critical praise, including a MyTheatre Award nomination for Best Supporting Actress (Musical). We caught up with Sophia just after Lazarus closed, following a successful run on the West End.

You have had a busy few years on the stage. You were in MCC’s play The Nether in 2015, and then joined the musical Lazarus at the New York Theatre Workshop and the Broadway play Blackbird. You have now returned to Lazarus at the King’s Cross Theatre in London.  What is it about live theatre that you enjoy most?
I like that nobody is gonna say “stop” or “cut” because I need to be powdered. On stage, for me at least, it is not about being perfect. It’s about being human, and using your body and being real. I use the “imperfections” to make myself relatable. I love how spontaneous it is, coming up with things depending on how an audience is reacting. One performance can be totally different than the last depending on how an audience is reacting. A general set of rules and consistency is always something I have set but it’s fun to discover things on stage, and play off of what the other actors are doing different intentionally or unintentionally and the audience too.

There appears to be a trend in your recent work. The Nether, Lazarus and Blackbird are all darker shows that address difficult social issues, including abuse and violence towards children. What is it about these plays/musicals that intrigues you, and why do you think that it is important to tell these stories?
I think at a very young age I discovered the brutality and cruelty in the world. I lost innocence young and doing anything to bring attention to topics regarding cruelty towards children, has been important to me. I want people to stop ignoring it, and not just children. I want people to have awareness and face the issues we have today because ignoring them will do absolutely nothing. I feel that I need to speak about it and raise awareness. I consider myself a bit of a activist in that way and theater just happens to be the place I feel safe speaking. This goes for every problem I see, not just children. It is hard to find work that talks about important issues, so when I am not doing things like The Nether, and Blackbird I just look for mind-bending topics that makes you think. Im not a fan of mindless tv with ordinary stories.

Turning to Lazarus, for those who may not have had an opportunity to see the show yet, what is it about?
Lazarus is whatever you want it to be. I could be a hallucination or a real ghost, or both. That is up to the audience and what they create in their own mind. I would say just sit back and watch and let whatever comes to you come to you. Try not to overthink it.

What is the greatest challenge of playing “Girl”?
For one, I had to lay in a puddle of cold white liquid completely still for some time in the show. It would tangle my hair all up. There were some challenges dramaturgically. Because not all of the songs were written specifically for the show, I had to really use my imagination to root it, and to find a way for the audience to understand it for it to make sense in context with the show. But there were other challenging things about the role, like singing that show 8 and sometimes 9 shows a week. I had to really care for myself, and get a lot of sleep.

I was preparing to submit my review of Lazarus last year when news broke of playwright and composer David Bowie’s death. I actually re-wrote my review because his death dramatically altered my perception of Lazarus and its themes. Did his death change your feelings or understanding of the show?
The show certainly took a new meaning for me. Certain things clicked into place that I hadn’t yet discovered. I remember on our first performance back after his death, every word that came out suddenly felt clear. It felt like a bit of a tribute in a way, and that stayed when I performed it in London. It felt as though people were coming to mourn him and that was a completely different energy that the audience was giving.

There are many iconic songs in Lazarus. Do you have a favorite musical number or a favorite moment in the show?
My favorite song to sing is” This is Not America”. ‘Snowman melting from the inside’, ‘so bloody red tomorrow’s clouds’- these lyrics are what I think of when I look at the media now that Trump is in. It feels so good to express it on stage. I also really like “Dirty Boys”. A favorite scene is the moment before I sing “Life on Mars”, where Newton [played by Michael C Hall] and I sit in the lit up rocket discussing hope.

Kings Cross Theatre is a larger venue than NYTW – has the show changed much and has the size of the venue caused you to adapt your performance at all?
It has changed a bit. It certainly was a switch in how much vocal power I needed to use and it was strange to adapt the show for it. But in general the size of my performance stayed pretty much the same. NYTW was a very intimate space, and Kings Cross, at first, felt a little massive.

You have a broad range of acting experiences on your resume. For example, in addition to your stage work, you appeared on NBC’s Smash and played Brigitta in The Sound of Music Live! I imagine that it is quite different acting for a camera than it is for a room full of theatre patrons. Do you find one more difficult than the other?
No I just find them different. I love doing both. My favorite thing to do, right now at least, is plays. I want to do more straight plays. In fact one of my dream roles is Saint Joan. I would also love to do more screen work.

Lazarus ended its run in London last month – what is next for you?
As David Bowie always said ‘I don’t know where I am going, but I promise it won’t be boring’. I am of course going to continue with my professional acting career, and continue to be very choosy about the work I do. I am very picky with what I do because I feel its important to do what I like.