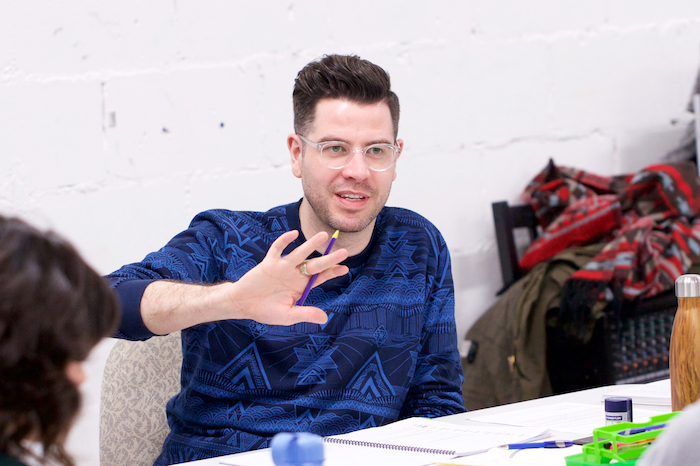 I saw writer/director Rob Kempson’s Outstanding New Work– nominated play Mockingbird at the Next Stage Theatre Festival only 6 days into the new year. It was the first production to be placed on the potential nominee list I keep on my desktop and stayed at the top of that list for nearly a full year as the rest of 2016 played out. I finally got to ask Rob about the hilarious, heartfelt and morally complex second instalment of his Graduation Plays series just as the third instalment is about to hit the Factory Theatre stage.

Can you remember your first experience with theatre?
I’m sure that it wasn’t my very first experience with theatre, but I vividly remember seeing The Phantom of the Opera when I was seven. In the (then) Pantages Theatre, I was astounded by the technical effects and the magical elements, but in the car-ride home I can remember being moved to tears because I was so emotionally affected by the story. That was the moment I gave in to the pull of theatre—that combination of emotional and technical magic.

Who are some of the artists who inspire you?
Because I work as both a director and a writer, and for both musicals and plays, I feel inspired by so many wonderful artists. But as far as playwrights go, I’m inspired most by some of my good friends—Jordi Mand, Briana Brown, Rachel Blair, Meghan Swaby. The list could go on and on. More broadly, I’m inspired by Linda Griffiths, whose work I think defines contemporary playwriting, and Michael Healey, who (for me) is the most authentically Canadian voice we have on stage.

Tell us about your nominated play Mockingbird. Where did the idea for that play come from?
Mockingbird is the second play in my series, The Graduation Plays. (The third and final play of the series, Trigonometry, actually opens on March 16 at Factory Studio.) Each play of the trilogy examines the complex relationship between power and authority in high school settings, but from a different perspective. I work a lot in schools as both a guest artist and a substitute teacher, and I find the environment to be a rich landscape of complicated interactions. The pull between professionalism and the human element of education is always present, and I think there is a lot of potential for interesting stories to emerge in that ecosystem.

What’s your writing process like? Do you plot and plan or just start at page 1 and work through?
I find that my writing process varies from project to project, so the particular structure or style of the work defines how I need to approach it. For Mockingbird, I set up the outside structure for the main plot points but then allowed my characters to take me in unexpected directions. I find that characters in conversation often know more about what’s coming next than I do, so I try to harness that part of my brain whenever I can.

Walk us through the casting process. Did you have performers in mind while developing the piece?
I tend to write with actors in my head. It helps me to find a unique voice for each character. However, I rarely end up working with those exact actors, and that’s what really lifts words off of a page. Writing for a specific voice means that I can create authentic dialogue; putting that voice into the body of another actor allows them to make choices you could never have dreamed up, and push that character into the real world.

What are some of the biggest challenges and perks of directing your own writing?
I feel like, when directing my own writing, I have to split my brain in two. Because I can make changes throughout a rehearsal process, I have to be careful to not just start making changes because the scene doesn’t work the first time around. I joke with my casts about my alter-ego “Fritz” who is the playwright of the piece. So before I make any changes, I always go home and check in with Fritz before confirming anything. It sounds crazy, but it helps me work as a director when directing and separate the writing. I think it makes me a better director too, because I approach the text as if it is written in stone.

How did the text change as the play got on its feet and the performers took on the roles?
For me, most of the text changes that happen in rehearsal are related to timing. Tightening things up with cuts. Re-working a given moment’s pacing. Because there are so many characters in Mockingbird, most of the changes we made were figuring out the best order of who speaks first, and who overlaps whom.

What were you hoping audiences would take away from the piece?
I wanted audiences to leave feeling divided on the issue in the play—the “appropriateness” of the teacher-student relationship. In fact, I want the audience to always leave divided after seeing one of my plays. I want to create conversation for the ride home. Of course I have my own perspective, but I hope that I’ve written each character to be truthful enough that you can’t necessarily find my voice amongst their perspectives.

Did you have a favourite moment in the production?
I think my favourite moment of the production was when Zack (the student) enters for the final scene and he’s wearing the shirt that is described earlier—it says “I f**ked Mr. Foster” on it. Audiences didn’t know whether to laugh or gasp in that moment and I really loved hearing them respond differently each night. Those are my favourite moments in theatre—when you don’t know if it’s okay to laugh but you think it’s funny. That tension is really fun to play with.

What are you doing now/ what’s your next project?
Right now, I’m in the throes of directing the third and final play in the trilogy—Trigonometry. This play is thematically related to Mockingbird, but you don’t need to have seen Mockingbird to enjoy Trigonometry. It plays at Factory Theatre in the Studio from March 16-25 and features an incredible cast: Alison Deon, Daniel Ellis, and Rose Napoli. I’m really excited to share this piece with an audience and conclude this trilogy of work about students and teachers. You can find more information online at trigonometrytheplay.com.