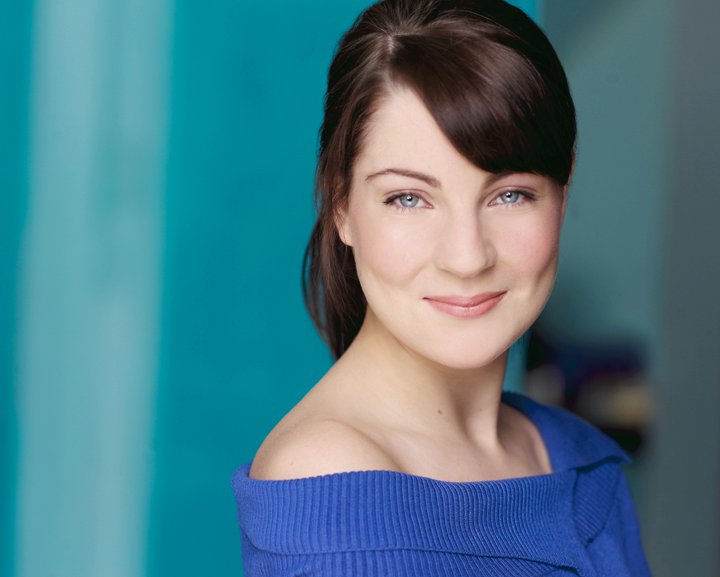 Meghan Greeley is nominated for Outstanding Supporting Actress for playing a snake in a Shakespeare play. Sort of. That’s not a metaphor, but it’s also a metaphor. Wolf Manor Theatre Collective’s Richard III was set in the animal kingdom where Meghan’s cut-throat but deeply human Buckingham maneuvered her way to power while never fully letting on that she was the powerful one.

Can you remember your first experience with theatre?
The first time I remember performing was in class – grade four or five, maybe. We were acting out a folk story and the parents had been invited to attend. I had wanted to play the young woman in the story (for the sole reason that I liked that costume), but my teacher cast me as the grandmother. I decided to wear bifocals for the part and practiced changing my voice. When it came time to perform I had a hard time getting through my lines because the parents were laughing so hard. I was painfully shy, so I’d never exactly commanded a room with my presence before. They were probably laughing at me as much as the dramatic situation. But this was the first time I’d ever felt gravitas.

How did you get involved with Wolf Manor?
Artistic Director Dylan Brenton and I are both from Newfoundland. We were home for the summer in 2015, working at two different theatre festivals. He came to see some shows playing at our festival and our friend introduced us. I remember him sitting at my kitchen table and talking about this upcoming production of Richard III he was planning, and how Mallory Fisher, who was working at the same festival as I was, would be directing it. At the time I was planning on taking a break from acting when I got back to Toronto to focus on writing, but I’ve always loved that play and I was drawn into Mallory’s vision for it. So I auditioned.

Richard III featured a fair amount of unconventional gender casting, including casting you as Buckingham. Do you feel that that dynamic altered the character and her relationship with Richard at all?
Inevitably, certain things will change when shows are cast with unconventional gender. Even in cases where the meaning of the text isn’t greatly impacted by the switch, the audience will still interpret it one way or another based on their own feelings or assumptions about gender dynamics. In this case, though, I didn’t feel as though we were really manipulating the text to build a relationship that wasn’t there. Mallory and I already saw sexual undertones between Richard and Buckingham in the script as often as there were moments of love and loyalty. The thing that I loved exploring in the role was whether this sexual attraction was genuine, or really a weapon used by Richard to manipulate and exploit the lengths to which Buckingham would go in the name of loyalty.

How did the animal kingdom setting affect Buckingham’s role in the story?
I loved exploring Richard III in the animal kingdom. To my mind, there’s something very fitting about the story of a hungry outcast’s rise to power explored within the context of a primal world, with its own base desires and rules and echelons. And we weren’t animals outright, exactly, but it was interesting to explore animal instincts and urges in relation to our characters. It led to interesting discoveries. I think that in some ways Buckingham is the real puppeteer, carrying out Richard’s dirty work and even keeping him in line. So at first I thought I was a crow or a raven, something intelligent, sharp-eyed. But there’s something about Buckingham’s smooth cunning that wasn’t co-operating with that interpretation. So then we realized that no, she was actually a snake.

Tell us about working with Mallory Fisher as a director and how she helped to shape your interpretation of the character.
Mallory is a great facilitator in the room; she’s very open to exploration and works with the cast to create a shared interpretation of the story. She has a vision and a concept, certainly, and she’s a bold leader, but she doesn’t dictate. She works with actors to find the common ground upon which to build the world. Also, I’ve never met anyone more passionate about Shakespeare. Her command of the text is solid. And even when the subject matter is dark, she is able to find and direct moments of lightness and comedy.

Did you have a favourite moment in the production?
I always enjoyed the scene where Richard, Catesby, and Buckingham are duping the Mayor. It was a momentary farce that I looked forward to each night as a kind of reprieve from the gore.

You also wrote and starred in Kingdom this year. Tell us about the genesis of that play.
I’ve been on an eight-year journey with Kingdom. I wrote the show in 2009 for the final directing project of my undergrad. A few faculty members encouraged me to pursue it, so I submitted it to the RCA Statoil Playwriting Contest and it was one of the winners. Over the next couple of years it received several workshops and was eventually mounted by White Rooster in St. John’s, then later toured to the Stages Festival in Halifax. Right before we left for Halifax we were thrown a curveball; the provincial touring funding had been cut and it looked as though we might not be able to do the tour after all. But people who’d seen the show previously actually donated enough money –– we weren’t even using Kickstarter, they were just writing cheques and emailing funds –– to get us there. That meant a lot to me. The arts community of St. John’s is an incredible force.

By last year, Mallory and I understood that we worked well together and shared a pretty similar artistic vision for the kind of theatre that we wanted to create. Kingdom explores the infantilization of women in a patriarchal society, and as a couple of outspoken feminists, it was a subject we wanted to delve into. When we formed our own company, Kingdom made sense as our inaugural project.

Do you have any dream roles you’d love to tackle one day?
I’ve always wanted to play Pony in Judith Thompson’s White Biting Dog. And Sonya in Uncle Vanya. I also just saw Mary Stuart at the Almeida in London, in which two actresses tossed a coin at the beginning of the show to determine who would play Mary Stuart that night and who would play Elizabeth. Either of those roles would be a dream. Also, Jacob Mercer in Saltwater Moon. I’ve played Mary Snow three times now and I think it would be a fun challenge to switch it up.

What are you up to now/next?
As an actor I’m currently performing in another Wolf Manor show, Three Sisters [opening tonight at Kensington Hall] As a writer, I’m a part of the Tarragon Playwrights Unit, developing a script called China. I’ve also got a few other plays and screenplays in various stages of development.

Is there anything you’d like to add?
Yes – thanks for the nomination!