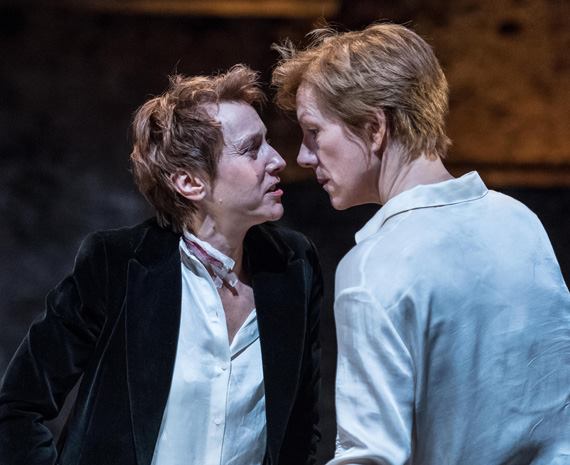 Mary Stuart at the Almeida

A timely and shaded production that breathes much-needed life into the faces of primary school history posters. Based on Friedrich Schiller’s text from 1800, Mary Stuart- both adapted and directed by Robert Icke- is unexpectedly riveting. Following the story of Mary Queen of Scots and her cousin, Elizabeth I, it recounts Mary’s final days in prison before her state-sanctioned execution. Building up to a (fictional) meeting between the two monarchs, the play takes us through the political scheming from both sides of the walls of the Tower of London, as Mary’s supporters plot to break her free and restore Catholicism to a position of power and Queen Elizabeth’s henchmen and advisors argue over expediting Mary Stuart’s inevitable death. It’s an excellent psychological portrait of two leaders vying, not just for power, but for their lives. However, the play sometimes slips off track when it gets far too bogged down in its own historical setting and the focus veers from its two protagonists.

The greatest asset of Icke’s production is its two leads, Lia Williams and Juliet Stevenson. Both actors are prepared to play both lead roles, and which actor plays which role on a given night is determined by a coin toss performed live in front of the audience (a gimmick that provides excitement for all of two minutes before becoming pretty much totally forgotten about). Having therefore seen effectively one half of the potential production, I can say that Williams’s Mary Stuart makes for an alarmingly endearing character: she plays her with warmth and passion, her voice smooth but steady as she pontificates on points of law and begs for her life. On the other side of the coin, Elizabeth is played masterfully by Stevenson, every slip of insecurity dancing subtly on her brow while she retains a terrifying air of authority. Both actors are capable of filling the stage with their physicality and then folding into themselves in moments of utter weakness when their power, and their own lives, are out of their control.

The script is also, for the most part, a nuanced success. Many of Icke’s scenes are so well-structured that they feel as if they would work as standalone pieces. A scene which begins with Mortimer, a secret Catholic and supporter of Mary (Rudi Dharmalingham) singing Mary’s praises, declaring her a goddess and the most powerful woman in the world, quickly becomes drenched in misogyny as Mortimer sexualizes his compliments to the point where the encounter becomes a sinister near-sexual assault. His adoration for her is not as a ruler, but explicitly as a female ruler, and therefore a ruler he still believes he can claim for his own. This reveal is a masterfully textured affair: the descent into misogyny is slow and deliberate, each word from Mortimer’s mouth casting a darker and darker shadow over the stage.

However, for all the great scenes in Mary Stuart, the play doesn’t seem to know where its action truly lies. Its most interesting part is the raw emotions and experiences of the two female leaders and how they fight tirelessly for power, even within the walls of prison. The power dynamic between them is captivating. Is it Queen vs Queen? Are they prisoner and captor? Feuding family members? Political rivals? They’re all of the above, and this prompts the creation of some amazing dramatic moments. Their fictionalized encounter in Fotheringay is one of the most exciting moments of the play: the scene throws the leads from begging into screaming into hissing like snakes, supine on the floor. Their encounter, encapsulating all of the elements of their complex relationship, is electrifying. So then, when a bunch of men walk on stage and start scheming with each other, and hitting us with a barrage of historical jargon, the pace is gone. Yes, some of these scenes are important for conveying the bones of the plot and providing some context. But they’re long, and intended to be dramatic—which they’re not. Instead of engaging me, I was left wondering when the two protagonists would return to the stage. The truly engrossing parts of Mary Stuart are in the power dynamics of the leadership battle. What’s not interesting (read: never interesting) is a bunch people in suits talking shop, very quickly, and with a lot of historical information.

When Mary Stuart focuses on its protagonists, it’s a true dramatic feat. Emotions and relationships are really at the centre of this play; it hardly feels like it’s about history at all.