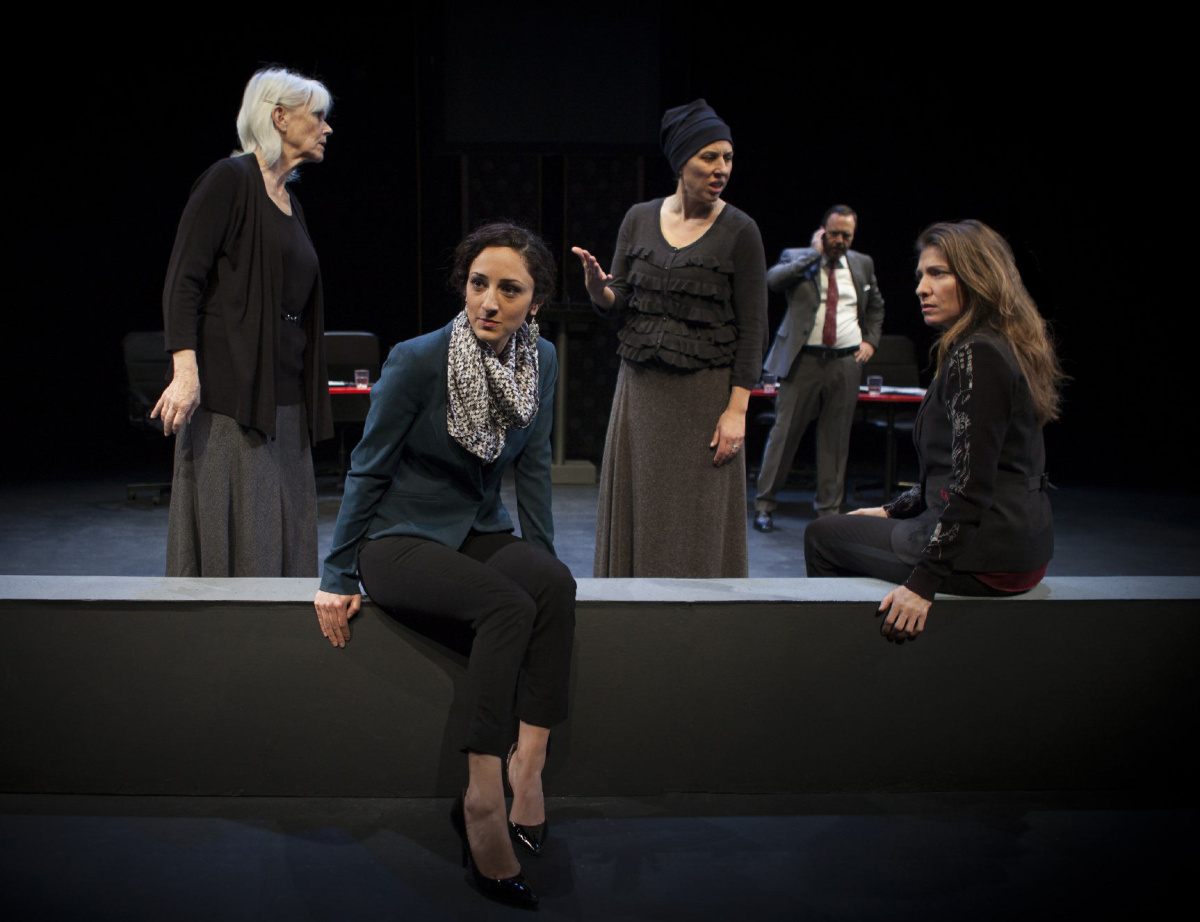 Nightwood Theatre’s Unholy stages a debate about whether you can be both religious and a feminist. Written by Diane Flacks and directed by Kelly Thornton, the production presents us with four women, two a side, arguing both for and against institutionalized religion.

On the pro side, we have Yehudite, an Orthodox Jewish leader and mother, and Maryam, a progressive Muslim lawyer. Their opposition consists of Margaret, an ex-nun, and Liz, an atheist and ‘culinary Jew’, as she jokingly refers to herself. The debate is to be aired on YouTube, and hosted by Richard, a seemingly innocuous jocular host.

The story is also peppered with flashbacks of the characters’ pasts (we see Yehudite on her sister’s wedding day, and Margaret’s work as a nun) and scenes between Liz and Maryam the night before the debate. The scenes are trying to flesh out the characters and give them more complexity than their debate views would suggest: Margaret has conflicted feelings about her work as a reproductive counselor, Yehudite was once in love with a man she was not allowed to marry, Maryam’s personal tastes and sexual orientation don’t fit neatly into traditional Islam, and Liz has a complicated past including a partner who died of cancer which forms no small part of her current view of religion.

The debate itself rehashes a number of basic views: that religion provides a good framework of values in which to raise children; that religions like Islam don’t reduce to their extreme elements; that institutions ruin religion, that organized religion has such a history of oppression and violence that it cannot be justified under any terms. The play is trying to show the two sides, both as they are presented politically, and as they manifest personally.

And yet. Richard checks in with the audience part way through to hear, via clapping, how many of us have changed our minds versus how many of us have become more entrenched in our views. The audience was lukewarm in the feedback (I think that they could be more assertive about how to structure that, like getting us to think about what our position is at the beginning, and then checking in further down the line) but the feedback seemed to be that more of the audience had become entrenched in their views rather than the reverse.

I was reluctant to reply because I don’t think the issue is as straightforward as the debate presents. And as against institutionalized religion as I can be (especially regarding my own cultural birthright, Catholicism), I found myself sympathizing more and more with the pro-religion side, in part because the arguments against them were just so extreme. What this production reveals is the abject failure of public discourse surrounding these issues, how it lacks nuance and compassion and complexity.

The most effective character by far is Maryam; her backstory provides us with a sense of how her religion ties into her relationship with her family, her identity as an immigrant and as a woman, and the ways that those elements are interwoven and often inextricable.

The other characters are less interesting. As the story unravels, we learn that Liz became an atheist in part due to her partner’s death. It is meant to humanize her atheism, but instead it undermines it. Cheryl Strayed has written on this better than I can, but it betrays the ways in which people’s attachment to religion can be rooted in self-centred assumptions.

Both Yehudite and Margaret could be fleshed out much more, and I felt a bit disappointed at the clichés they represent. Yehudite seems like an angry woman who lost in love, standing behind family values as a justification for her life’s disappointments. Margaret comes off as a naïve old lady, ignorant of social media and constantly being talked over. I wanted more comeuppance for these characters, a chance to make arguments that portrayed their respective thoughtfulness, but instead they remain very much on the surface.

The banter between the women is lively and often very entertaining, though the fact that they interrupt and take shots at each other weakens the force of their arguments. Their clever dialogue dissolves into a kind of purity politics, as they accuse each other of selling out, not being the ‘right’ kind of woman, or feminist, or person. Not to mention the fact that as the play draws to a close, the women – each distinct in the choices she’s made – lob catty insults at each other as it dissolves into chaos and violence. The most interesting moment of this is when Richard – on the phone with his tech team – reveals his darker, angrier, entitled side, yelling that the women aren’t taking the debate seriously, that they are acting like children. (But also, he’s not wrong.)

Liz is the character we are expected to sympathize with the most (especially given the theatre and the audience), but her arguments come off as the most extreme of the group, and surprisingly, the most oppressive. Her view smacks of white feminism, of a feminism that is rooted in aspects of culture that have class and status and education to prop them up. Telling women that they cannot wear a niqab is, when it comes down to it, not far off from dictating that they must. Both dictates are paternalistic; neither one respects the woman’s autonomy, neither gives her space to make her own choice.

The questions driving the show remind me of an episode of Star Trek: TNG, “The Perfect Mate,” in which the metamore Kamala is being housed as a gift for a political ambassador. She is biologically programmed to internalize the desires of her intended mate, and, as the result of an accident, she imprints on Picard instead of her intended (painfully boring and bureaucratic-minded) husband. She internalizes Picard’s wish for her, which is that she be autonomous, that she have a mind of her own. I had conflicting feelings about this storyline: on the one hand, we are relieved that Kamala never internalizes the banal desires of the politician she ends up marrying (although this means she is inevitably bored by him), and yet I was disgusted with my own relief, because the only reason she has her own desires at all is precisely because Picard wanted her to have them. As a woman, this cuts close to the bone, and there are so many excellent questions that come out of this infuriating episode: is it just patriarchy all the way down? Is it possible to be an autonomous being within oppressive structures? How do we understand the desires of a being who has, through no fault of her own, internalized the very conditions of her own oppression? And do her desires reduce to that oppression?

These questions matter, and the show seemed like it was attempting an answer, but presented that response as a choice between one or the other. The fact is, it’s both true that organized religion has created innumerable harms, and also that it provides a structure and a community that supports people and allows them to flourish. This tension is not a point to end on, but a starting place. After all, the question of how to be religious while also being a feminist is not that different from questions like: how can I live in a capitalist society that runs on exploitation and still be a feminist? How can I consume most pop culture within a rape culture and still be a feminist? Should we simply throw these off too?

What the play does show painfully accurately is that women are already navigating the small boxes granted to us, navigating impossibly few – often paradoxical – choices. The answer cannot be as easy as simply throwing off the mantle of social frameworks, but finding ways to deconstruct them from the inside. If this play showed me anything it was that moralizing to each other that we aren’t making the ‘right’ choices only further compiles the problem, with ugly results. In its failure to convince me that feminists should eschew religion, this show reveals the importance of mutual recognition, of giving others the space to make the choices that you might not make, and understanding that different choices do not necessarily stem from opposing values.

The main thing that I really like about the show is the burgeoning dynamic between Maryam and Liz, and I really wanted to see more of that, because that is where stuff really gets interesting. Political debates make excellent spectacle; they make for underwhelming storytelling. If the emphasis in the play were reversed, and the debate were the background context of a story that focused on Maryam and Liz, it would make the play immediately more interesting. That storyline asks the really interesting questions, namely: how do we negotiate relationships that include two people with very different lifestyles? Can people overcome these divides, and if so, why do they do that and how do they do that and what does it look like? Those are the questions we need to be asking right now: not how do we build walls, but how do we build bridges?