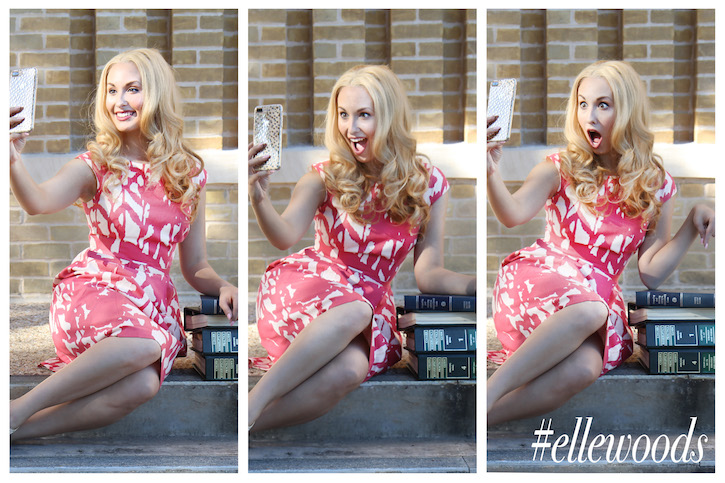 The Unbearable Whiteness of Blonde

*spoiler alerts for those of you who haven’t seen the musical, but I haven’t even seen the movie*

To start, I understand that Legally Blonde is a comedy. Much of this article reads like someone deliberately missing the joke to discuss a hot-button issue. But remember: any production, before it reaches opening night, goes through numerous vetting processes, auditions, castings, stagings, blockings, designs and modifications. No form of performance is as heavily processed as musical theatre, but that doesn’t mean there isn’t something real at its core; something worth discussing in a real way.

We have rigid expectations for what a musical theatre cast should look like, sound like, act like and, based on those expectations, musicals tend towards a white audience and white cast. I don’t mean to take away from Hamilton, The Lion King or other musicals that embrace diversity, racial differences or global cultures, but the history of the musical is one written in whiteness. It owes its lineage in part to the minstrel show, where white actors wore blackface to denigrate African Americans through performance. Much of the musical theatre form comes from Europe- Edwardian musical comedies, ancient Greece, the Renaissance – these are the true forebears of the tradition, and it’s no small matter that they are the forebears of white Western civilization. They color our expectations for the colors of the show, and it is a decidedly monochromatic palette.

To that end, Legally Blonde may be the whitest musical ever written. It comes at a time when we are more vocal about race than we have ever been, when we are more aware of white privilege than we have ever been, when we have published books such as Stuff White People Like. And instead of breaking from that tradition, instead of taking part in the larger cultural movement of globalism, diversity and equality, Legally Blonde celebrates the white traditions of musical theatre: white privilege, stuff white people like, wealth, power, tiny dogs, and big, distracting musical numbers with frozen smiles and high kicks. There’s an entire song (and a reprise!) about how Ireland is the greatest country on earth; I shouldn’t need to point out that it’s not a place known for its multiculturalism.

Texas State University’s production of Legally Blonde: The Musical debuted on November 15th, 2016. My office took us to see it the Friday of opening week. I was just as excited as everyone else: Texas State’s theatre and dance programs are nationally ranked. Students work alongside Broadway luminaries and produce professional performances like Hairspray, Chicago, Evita, and Rent. Caitlyn Hopkins, the director of the musical theatre program, has a list of credits that range from Star Trek to The Nanny on the TV end alone, to say nothing of her stage career. To wit, this was a musical none of us wanted to miss.

The show opens innocently enough. The sorority sisters of Delta Nu are texting and Facetiming and Snapchatting, exulting, “Oh my God, oh my God you guys.” Elle, their president, believes that her boyfriend will propose to her that very night. The stage pieces fly around with just as much abandon as the dancers, capturing the frenetic energy of the women- a captivating picture of ear-piercing screams, high kicks, and a LOT of hair.

Most of the production is like this- colorful, lighthearted, joyous and celebratory. I laughed plenty at the slapstick antics, the clever wordplay, the “happy people don’t kill” bit. But there were moments that gave me pause, and there were so many of them that on the drive back home, I turned the radio down low to hear myself think about them.

Take, for example, the first scene at Harvard, where Elle’s classmates are comparing their achievements, exclaiming how impressed they are at each other’s lives. A bearded black man comes to the fore introducing himself as “a prince in my own country,” forced out in a coup d’etat. It’s not hard to assume the country in question is in Africa, given the accent and posturing lent to the character. The joke is clearly not about race but about him getting into Harvard because of his royal position, but I asked myself, couldn’t the character have been a black American? Later on, when we meet Emmett, the “driven-as-hell” law student from humble origins, I asked the same question. There are arguments about power and privilege in both places that can be made by using race in smarter ways. Making Emmett an African American character doesn’t fix how white of a musical Legally Blonde is, but it adds an entirely new dimension to his dialogue with Elle. It highlights the struggle he’s had to overcome and celebrates the person he’s become when we meet him (even before Elle transforms him by taking him shopping), and makes his rise to power over the course of the play vastly more interesting. It even presents a wonderful juxtaposition against Warner because, as the story is now, Elle merely trades a successful rich white boyfriend in the beginning for another one at the end.

The moment when the only black man onstage (the African prince) is so brazenly exoticized, and moments like it, set a tone, and a rather uncomfortable one at that. Perhaps the mission of Legally Blonde is not to be smart about race. But there’s a bit of an expectation on that end when, in the program, the director’s note opens with “EMPOWERMENT! That was the word that kept coming to my mind as I continually read through the script of Legally Blonde.” Certainly, Cassie Abate, our director in question, has more in mind for women in terms of empowerment, which is important and certainly the best part of Legally Blonde. It’s fun and exciting to watch women perform and perform well in academic, professional and social settings. It’s done in a culturally relevant manner in the Texas State version and makes for hilarious stage moments, especially any scene involving Paulette, learning to stand up to her ex to get her dog back, or to take charge of her sexuality with the “bend and snap.”

But Legally Blonde is, in so many ways, about white empowerment. I think, to make this point as clear as possible, we must go back to Abate’s director’s note:

“Because of this musical’s emphasis on self-expression, I was interested in exploring a major component of self-expression in today’s society: social media. How would this story be told in today’s world of Twitter, Facebook, Snapchat and Instagram? How does texting replace the old telephone method of spreading news and gossip? How can social media destructively alienate and ostracize a person that is perceived as different? And on the flip side, how can we as a community use social media to empower each other and create a world where individualism is celebrated?”

Much of the show was communicated through large backdrops of oversized iPhones, displaying Twitter and Instagram feeds commenting on what’s happening onstage. Through many of the sappier musical numbers, pictures of Elle and Warner cycled on the screens, heightening the sense of the throwback and the feeling of love that must have been there, in the past that we are no longer privy to. Sure, there was plenty of gossip at the party where Elle arrived in a skimpy bunny outfit, and ostracization aplenty when she arrived at Harvard, but the gimmick of social media fails the director’s opening words. The Instagram feeds, the gossip tweets and the endless Snapchat videos, it all feels like narcissism and gossip-milling, a tour through the lives of privileged college students who communicate with each other using photos of themselves and hashtags. I haven’t been a college student in a few years, and I don’t use Snapchat or Instagram, but I’m not blind to it. I saw ‘fat-shaming week’ on Twitter. I have seen the merits and flaws of the ‘Insta-poets.’ As far as I see it, Legally Blonde is empowering us to emulate these behaviors, to obsess over the cult of the self, to hew to what is beautiful and attractive in Western culture, in white culture, because it is stronger, it is empowered, it has been visibly more powerful for centuries.

I work as an admissions counselor at Texas State, so you’ll forgive me if I interject a professional commentary or two on the scene where Elle is admitted to Harvard. First, the idea that anything other than a written personal essay or statement is an acceptable review material is simultaneously laughable and all too real. More and more schools are signing on to platforms like ZeeMee, where students can make webpages, videos and other forms of non-writing content for universities to see. It’s like making an audition tape for a program that doesn’t even have a performance component. Methods like these song-and-dance routines are used to hide poor writing ability, language comprehension difficulties, or any number of things that would ordinarily make a student below admissions standards for any university, to say nothing of Harvard. It ends up attempting to devalue the writing prowess of other applicants, and even the entire notion of the written word in higher education. Second, Elle turns what is supposed to be a personal statement into something completely impersonal. The pomp, the legal-speak turned into dance moves, the massive distraction that is the admissions scene – if it’s not superficial, it’s certainly not accomplishing what a personal statement is supposed to accomplish. Since most universities don’t conduct graduate interviews, the personal statement serves in its stead, to provide a more human component to the process by letting the applicant share something personal, something that an LSAT score or a 4.0 GPA can’t. But what the committee at Harvard is given is not a statement but a show, not an interview but a musical browbeating, not something exemplary of Elle the person but of Elle the beautiful white model figurehead. At a Hispanic-serving institution that is proud of its mandate to recruit first-generation students, a musical that shows a white girl getting into the Ivy League by singing and dancing is an odd statement at best, and insulting to our students at worst. In our post-#BeckyWithTheBadGrades era (Abigail Fisher, who sued UT Austin’s law program for not admitting white students), Legally Blonde should give everyone pause, because Elle gets in for, to put it bluntly, being white.

Maybe that’s why we Americans elected Trump president. After all, it’s easier to enjoy whiteness being celebrated onstage than it is to fight it, to stand against power and privilege. Everything has a price, even laughs.