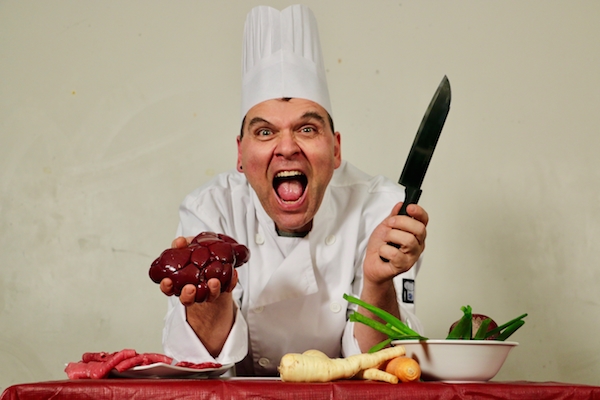 This Seven Siblings Theatre production of Titus Andronicus is set in a fantasy world that mirrors a dystopic future: after a long and gruesome war with the Goths (fierce scavengers of the surface), the Andronicus family takes Tamora, Queen of the Goths, and her sons, to their military bunker in the catacombs of Rome, a space inhabited by the supernatural deities that helped them triumph in the war for humanity.

The supernatural creatures are depicted by beautifully designed larger-than-life puppets. Designed to be handled by two or three actors, they have versatility in both voice and movement, and it is impressive how well the actors work together. The actor-puppeteers are grounded in their voices and their bodies, making it easy to watch them. The production as a whole is aesthetically striking: the puppets are bright yellow and green, contrasting well with the largely black set and red-toned lighting design.

Aside from the puppeteers, the acting is a bit patchy, but some actors stand out as strong, notably Lucius (Margaret Hild), and Tamora (Kate Werneburg), who wholeheartedly embraces Tamora’s anger and sexuality. Tamora’s two sons (Reece Presley and Dylan Brenton) do an excellent job of embodying the grotesque Shakespearian version of toxic masculinity, especially as they are hilariously interchangeable the way that young men often are in Shakespearian comedies. Aaron (Jordin Hall) is also excellent, charming the audience despite his evil plans, contrasting sharply later in the play with his heartfelt bid for his child’s life.

There is a lot going on in this play with parents and children. Will King states in his director’s notes that one of his driving questions for the production is: how do you honour the death of a child? This seems to get at part, but not quite all, of what’s going on with the significance of filial relations. King writes that “we see a variety of parenting methods in this play, but they always come from a genuine place of love.” But is this really true? It seems to me that what’s actually going on is parenting at its worst, the kind which takes children to be symbolic extensions of the parents, as mere pawns, or symbols to be destroyed. Tamora allows her sons to indulge their violent, rape-filled desires because they are instruments of her revenge on Titus. Titus allows his daughter to be a pawn from the beginning, thrown about and claimed by various men, determined to give her over to Saturninus, even to the point where he kills his own child who stands inconveniently in the way of his plan.

One of the most difficult moments to stage effectively is the aftermath of Demetrius and Chiron’s heinous attack on Lavinia, an attack that is meant to target not just Lavinia but, by extension, Titus Andronicus himself. She is raped and mutilated: her tongue cut out and her hands chopped off. Not only can she not name her rapists as a straightforward consequence of this disgusting violence, she is reduced to an object. Any agency she might have had has been stolen from her, she is no longer a social being in this world, let alone a social being with any procreative value.

There have been a few articles lately about the problem of rape in entertainment as a cheap motivating device, exploiting women’s bodies as sites of violence and violation. The overuse of rape as a plot point stems from the fact that, as a culture, we do not take it seriously enough. Mercifully, unlike many a Game of Thrones episode, Shakespeare has the rape take place offstage. Instead, we see the aftermath of the horrendous event. Dorcas Chiu does a masterful job of portraying the violated and mutilated Lavinia. What is hugely disappointing, however, are the incredibly underwhelming emotional responses of those around her, particularly Martius and Titus. Martius seems barely moved to find Lavinia bleeding and traumatized, and Titus’ emotional reaction to her has the depth of a flattened spoon, something that is especially noticeable when, half a scene later, his sons’ severed heads are delivered to him, over which we see him grieve not just more strongly but more realistically.

All of this points to my main concern with this production. Titus Andronicus is the bloodiest play that Shakespeare wrote and the fight choreography in this production (choreographed by Nate Bitton) is well designed and executed. However, the point of Titus is not the fight choreography but the emotions that surround and infuse such violence. Especially if one of King’s driving questions is how we mourn the loss of a child – one of the worst losses one can experience – the production needs more exploration of emotional depths to make the play worth pondering. Against this question, what do the supernatural puppets contribute? They might provide something of a contrast to the human characters, but if that is the idea then unfortunately it is not pulled off consistently enough. My worry is that instead of adding to the emotional depth of the play, the concept of the supernatural distracts from it.

Seven Siblings Theatre is a Toronto based company dedicated to utilizing the Michael Chekhov Acting Technique (which tries to tap into the psycho-physical connection) to produce theatre that showcases fantastic realism. It’s an interesting mandate, and a useful way to approach certain texts. I saw their production of Rhinoceros in the summer and really liked it. That show managed to balance the absurd plot with real fear and anxiety and confusion in a way that brought out the essence of that story. I’m just not so sure the imposed fantasy element works as well in this production of Titus.