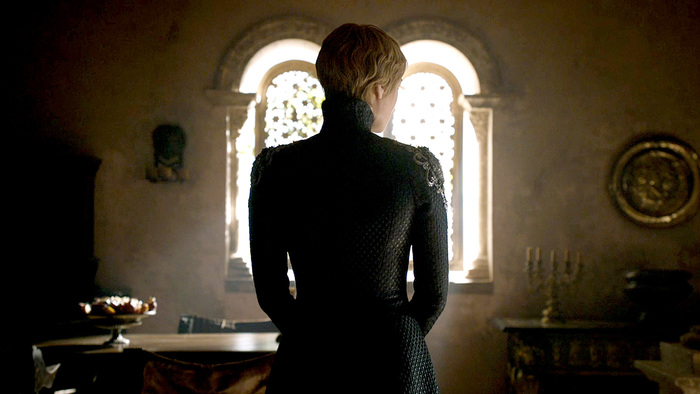 Game of Thrones: Finale, Feminism, and the Future

Finale
Season six is over. Hard as it is to comprehend, girls and boys, they ended the season with an hour and twenty-two minutes of the best scenes everyone wanted, stuck together with the fading glue of human interest. The audience got what it wanted in this episode, “The Winds of Winter,” and it got it by the bucketload. Arya’s return and revenge on House Frey, Jon Snow’s simultaneous Northern coronation and Southern revelation, Davos’ confronting Melisandre regarding certain religious practices, Varys’ final plan with the Martells and the Tyrells, and (the big one) Cersei’s ascension to Mad Queen-dom.

It’s a lot, make no bones about it. You can’t have a season finale in Game of Thrones without making sure plenty of things happen. But normally, creating new plotlines are some of those things. Usually we introduce a new character, a new threat, a sudden discovery or a fantastic voyage. This season, several plotlines were neatly wrapped up. Bran finally learned the truth about the Tower of Joy and who lay within its walls, confirming the fan theories that had been around since…well, since the show started. Melisandre is made to leave the North, fouling any plans for the immediate future anyone might have had about using her magic against the White Walkers (regardless of whether you need her specifically or not, you have to admit, shadow demon babies are useful tools in time of war). House Frey loses a few male heirs and the head asshat himself, Lord Walda, in an almost telegraphed premonition by Jamie Lannister. The order of the Sparrows is gone, Tommen’s endless fumbling is over, Daenerys is done with Slaver’s Bay (read: The Bay of Dragons) and I think we’re all done with Grand Maester Pycelle. Some might say that the noose is tightening. I say don’t look for season eight.

What happens between all of this wrapping-up, though, is a total farce of human interest. Benjen Stark’s farewell with Bran and Daenerys Targaryen’s command to Daario Naharis are meant to be our softer moments, the ones that give us pause, make us reflect on the humanity of the show. But Benjen left just as he arrived – cryptically, without preamble and seemingly irresponsible (you’re really just going to leave Bran with Meera to make their way to the Wall with the army of the dead on their tail?). The most emotion we get is “Goodbye, Uncle Benjen,” and that’s supposed to make us feel something because they’re family? Learn from “Battle of the Bastards,” HBO: bringing back a Stark family member only to take them away doesn’t hurt the audience, it just makes your audience not care. Furthermore, when you have a character like Daenerys, who is by all accounts empathetic, sympathetic and heart-on-her-sleeve to a fault, suddenly not feel a thing for her lover, the human interest gets rather lost. I don’t care about her choice to leave him behind, what I do care about is her processing of it. Daenerys becomes pseudo-mechanical, analyzing her own feelings, her own actions and counsel, before moving on and naming Tyrion Hand of the Queen. Don’t get me wrong, I enjoyed the episode, immensely, probably more than almost any other episode this season (which, in a way, is its own sort of problem). But when the episodes starts with a building blowing up and all of the people inside burning to death, human interest really isn’t the sort of thing I’m interested in any more.

Feminism
The biggest reaction in the media and among my friends, of course, has been to praise this show for its treatment of women in more recent episodes. Our culture has begun to idolize figures like Daenerys, make memes out of Cersei’s eyebrows, and shout with joy when Arya brutalizes the people on her list. A Facebook status summed it up nicely: “To all my ladies out there: Like Circe, may your anger and bitterness become your armor. And like Sansa, may you become as wise as serpents and take flight like the little doves you are.” Others (like myself) are wondering where Brienne, literally the strongest woman in the show, went for this last episode (Jamie can make it back to King’s Landing, but she can’t get to Winterfell?). Personally, I burn a small candle for Lady Crane, who was my favorite part of the play-within-the-play trope (and yes my number one celebrity crush is Margaery Tyrell, and I am the saddest and you should be too).

Yes, the Beyonce comparisons are endless. Yes, women look better in armor, or with shoulder pauldrons, or getting sweet, sweet vengeance. Yes, it’s refreshing to see a show in which women occupy a diverse number of roles, young, old, heroes, villains, antiheroes, sidekicks, nobles, paupers, comedic, severe, naked, clothed, etc. It’s what gave Jessica Jones the bulk of its appeal, that you have a show with lead cast of mainly women doing interesting things. It certainly serves and has served Game of Thrones well – nearly all of the most iconic scenes have been female-centric (Cersei’s near poisoning of Tommen on the Iron Throne, Daenerys’ liberation of Astapor, Arya’s assassination and training sequences, Lyanna Mormont’s wonderful banter and so on).

But I’m watching the spike of reactions to the season six finale, and I’m talking to my friends about the women in the show, and there is a sense of trepidation rising in my throat when we talk about Game of Thrones and feminist heroes. Let’s not forget, this is the show that dealt a pretty harsh rape card for a long, long time. There’s so much gratuitous sex (on top of the necessary, plot-driven sex) that many critics have called the show a haven for ‘women-as-sex-objects’ debaters. Just because we’re turning a corner now doesn’t excuse the past five seasons.

Moreover, it’s the why of people’s fascination with the females of “The Winds of Winter” that is an issue for me. Good things don’t happen when Cersei Lannister gets what she wants. She sacrificed her son and everyone in the Sept of Balor to become the iron-fisted ruler, to fulfill the witch’s prophecy. Cersei is strong, yes, but it is a strength that takes some pretty awful things to develop. Her solution to Sansa’s misery, if you recall, was recommending that Tyrion impregnate the girl, to which he replied, “You have children. How happy would you say you are?” Cersei derived happiness from having something of her own, someone of her own. This scene tells the audience a great deal about her worldview – she likes to possess things, she needs to possess things in order to stay alive, and she needs to stay alive for, what exactly? To kill scores of people, to climb Littlefinger’s chaos ladder, to sacrifice those people she needed to stay alive for so she can be the Queen. This is what Cersei does with her strength. This is what she does with her power. She is her father’s daughter, to be sure, but her strength and her malice are her own, and they are indistinguishable.

So why do people love and idolize and cherish this ideal? Because it’s what the Internet has taught us. From the screen of anonymity, you can post and write and publish whatever you want, how mean you want, how awful you want, and if you do it just right, you’ll be applauded, perhaps rewarded for it. The personas we maintain online, the self-indulgent bullying we assume when we troll or when we make the meanest of jokes – would we put up with that person in real life? Would we want to even assume that such a person exists? So when vileness stares us in the face, we react as we are wont to react online. We mock it, we use it for our own vileness, we champion it and beg others to subscribe to it. And it’s our right to do so. That’s the true power of the Internet, of course, in the role it plays as the land of do-as-you-please. There is an element of manipulation, of course, as some posts, tweets and links are promoted and others are demoted by the brainless algorithms behind it all. And I make no claims at suggesting a universal morality or any such ethical pantaloonery. But I am wondering if people will swallow their “Yaas queen” when they see a Mad Queen at the height of her madness and power. After all, madness is, at its core, the ability to magnify the petty into the personal, and Cersei has never lacked a unique talent for grudges. But understand – it’s always hard, telling apart a woman in armor from a strong female character.

The Future
It’s a long way still to season seven, and I don’t even know if we’ll see a season eight. So much has changed since we first started on this path, wide-eyed children climbing towers with Bran and beating up butcher’s boys with Joffrey. Game of Thrones has gone off-book, into the wilds and across the seas. Plotlines are beginning close as Arya’s list grows smaller. Daenerys is finally on a boat with a pair of armies at her side. Jon is King in the North, and there is sure to be a bright, dragon-riding future for him, but it is his sister that holds the most tantalizing future for me right now.

Sansa, with her entry into the Great Game, has had a taste of power. She was lead on by Littlefinger to believe the North would rally behind her. She was brought up to believe that Jon was less than her, that a Snow could never rule over a Stark. And here she is, the true name-bearer playing second fiddle to a half-brother. It may be unlikely, it may be foolhardy, it may be beyond what there is hope for, but I see her, I suppose, as Littlefinger sees her – in the perfect position for betrayal, primed and ready. After all, she is the King’s sister, the poor little girl shuttled across the world, married to many, beholden to none, finally in her ancestral home with her loyal Northern people. And a woman with no motives is a woman no one suspects.